Theatre Review: Druid Theatre Company’s ‘A Whistle in the Dark’ at the Kennedy Center 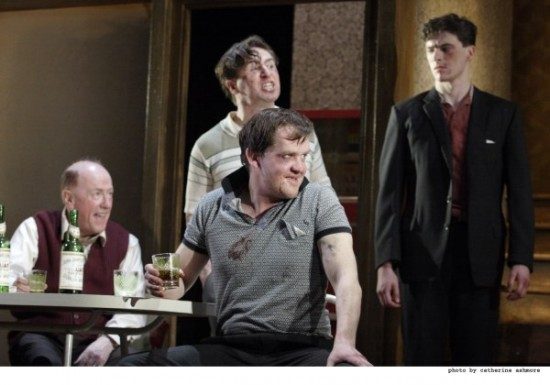 After Wednesday’s performance of Conversations of a Homecoming, with its alcohol inspired harangues about idealism’s disappointments, one might expect the next act of DruidMurphy to focus on the rebellious 1960s, the era that gave birth to Kennedy’s version of hope and change. To be sure, certain elements repeat. The lead character is once again named Michael (and he’s once again played by affable Marty Rea). The play once again opens with a woman staring wistfully, yet desperately, out into the audience. Other than that, however, what one might have expected, does not follow. If Conversations required a bit of drink to get the characters’ juices flowing, A Whistle in the Dark needed that drink to slow these characters down, to keep them from totally wrecking havoc on the world and its children.

A Whistle in the Dark (initially entitled The Iron Men) was one of Tom Murphy’s first plays, the one that launched his playwriting career, and it’s easy to see why. For this is the kind of play upon which a national theatre is built. Not only does the play cut deep and leave a mark, it exposes the cultural fibers of the Irish people and their spirit. And, fortunately for the Kennedy Center audience last night, this play also transcends that national identity, speaking loudly and clearly to any people drunk on testosterone and the ravages that result therefrom.

In Conversations protagonist Michael returns to the land of his birth to rekindle lost dreams. In A Whistle, a different Michael’s family follows him to England, to which ten years earlier he had escaped. The drama that follows reveals the power of culture and family-ties in the shaping of destiny. For Michael, the intelligent son of the family, had hoped to extricate himself both from his familial heritage and its historical dilemma—a heritage that relies on verbose machismo to gain respect within its historical dilemma of economic and cultural oppression.

Set in Coventry, England, in 1960, Michael (Marty Rea) has married and begun a new life with his English wife Betty (Eileen Walsh). The eldest of five sons, Michael has dreams of becoming a bank manager and moving up in the world. When his younger brothers, the leader Harry (Aaron Monaghan), Hugo (Garrett Lombard), and Iggy (Rory Nolan) move in and establish a local criminal enterprise, Michael and Betty become concerned. The play opens only moments before Michael’s father (Niall Buggy) and youngest brother (Gavin Drea) arrive. The family it seems are intent on settling a score with a rival family by brawl. 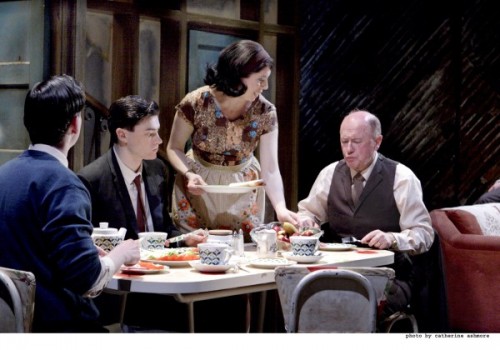 As this ensemble demonstrated in Wednesday night’s performance of Conversations, they are more than up to the challenges presented by this script. For audiences seeing the trilogy performed on Saturday, there’s an added bonus: the sheer joy of witnessing the various actors physically transform from one character to the next. This utter transformation was particularly apparent in the two middle brothers, Lombard’s Hugo and Nolan’s Iggy. Without the program informing us that those same actors had performed roles the night before, we would have sworn that the cast consisted of entirely new faces, and bodies.

Rea’s Michael has the most psychologically complex character. A man who has committed himself to a more dignified violence-free existence, he now finds himself surrounded by violence. Not only has the violence invaded his own home, but his neighborhood is also increasingly beset by it. In fact, recently his brutish brothers had saved Michael from an attack. Rea’s performance hits all the right notes, wavering from pathetic to desperate to capable finally of anything.

Des is Michael’s youngest brother, and the object of his concern. Drea brilliantly captures this young man who is torn between his admiration for his eldest brother and his loyalty to his father. As he tries to take his first steps into the world, wanting both to win respect from his clan and honor for himself, the audience recognizes his dilemma without truly appreciating the impossibility of his task, made only more difficult by the alternatives offered by his thuggish brother Harry.

Monaghan’s performance of the emerging crime boss Harry is superb. The genius of Murphy’s playwriting is the empathy he demonstrates even for the villainous. Though not as articulate as his elder brother Michael, Harry defends the cause of the Iron Men with an absolutely authentic contempt for the intellectual class and their argument for passivity in the face of an unjust society. Monaghan’s Harry almost has the audience agreeing with his brothers that the brutal measures he enacts are both necessary and effective.

Michael’s wife, Betty, represents the sole feminine consciousness in a world dominated by a patriarchal ethos set on using savagery to achieve its ends. Walsh plays her with subtly and grace, allowing the audience to track her journey from concern to desperation with growing empathy. When she finally steps up and confronts the invaders, demonstrating courage in a world woefully lacking in it, she reveals the play’s thematic soul.

…the kind of play upon which a national theatre is built.

Playing counterpoint to Betty’s courage is Dada, the family patriarch. Buggy’s performance shines brightest in an ensemble of excellence, as he plays the character’s deep contradictions and mind-numbing flaws with total commitment. A man of many speeches, but all with a similar theme (in this time of political hot air one couldn’t ask for a more apropos analogy), Dada riles up his familial troupe with both fiery rhetoric and linguistically correct adverbs. Buggy’s performance was so stellar that ironically, the audience—and even against its best intentions—could understand and empathize with this bastard of a father.

The direction and scenographic elements of DruidMurphy were again superb, with each element supporting the ensemble’s dramatic storytelling. Of particular note in A Whisper was the work of two members of the creative team. Fight Director Malcolm Ranson managed not only to take the air out of the belly of several actors, but also the belly of the audience. Additionally, make up artist Val Sherlock transformed the clan of brothers as well as side-kick Mush, played with delightful cheer by Michael Glenn Murphy, into a gang of bruised and battered fighters after the brawl.

When Peter Sellars directed the short-lived American National Theatre at The Kennedy Center in the 1980s, he bemoaned the shortage of American scripts that addressed America’s national character. His solution was to declare Shakespeare an American playwright and produce Henry IV as the National Theatre’s inaugural production. With productions like A Whisper in the Dark it’s easy to understand where the contemporary Irish Theatre developed its moxie, for this script gazes unflinchingly into a people’s predicament and exposes for all to see the pitfalls of subsequent behavior. Although the Kennedy Center might have trouble fulfilling its original mission—to offer the best of America’s performing arts—with DruidMurphy the Center demonstrates its capacity to offer the best of other’s national voices, and in so doing allowing us to claim them as speaking for us.

Druid Theatre Company’s A Whisper in the Dark plays again at the Kennedy Center on October 20 when audiences will be given the opportunity to experience the whole DruidMurphy trilogy starting at 1:00 p.m.

Running Time: 2 hour and 10 minutes, with one intermission.