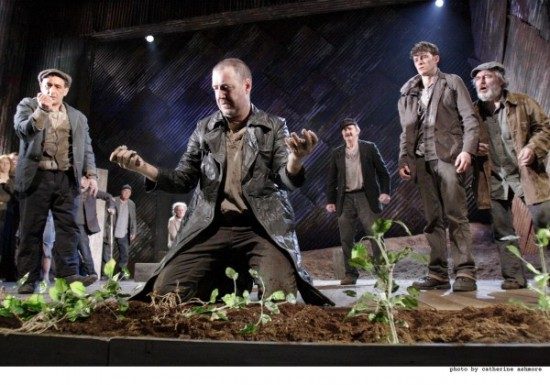 Famine, the third and final play in The Kennedy Center’s presentation of DruidMurphy, possesses what most American theatregoers (in fact, what most Americans period) find antithetical to human nature: history. Set in occupied County Mayo, West Ireland, 1846, this Tom Murphy play takes us to the Great Famine, or as the rest of the world calls it: the Irish Potato Famine. What we witness on the stage is not so much drama as we have come to understand it—an individual man or woman in conflict. Rather, what we engage in on that blighted landscape is the plight of a people struggling against the forces of nature, the forces of man, and—yes—the forces of their own collective identity. What we have seen by play’s end is the birth of modern Ireland.

Famine is more myth that play, and more poetry than dialogue, which is not to say there is any shortage of drama taking place along the way. In fact, during the course of the evening the audience witnesses a funeral, a betrayal, an assassination, a brutal beating, a tender love scene, and a mass migration (or what one might call an ethnic cleansing). Along the way, however, Tom Murphy’s language and the play’s twelve scenes evoke the pathos of great tragedy. As in Athenian tragedy, Famine’s protagonist, John Connor, the patriarch of Glanconnor Village, stands on stage not so much as a man but as the embodiment of a people. Thus, his fate becomes the fate of Ireland. 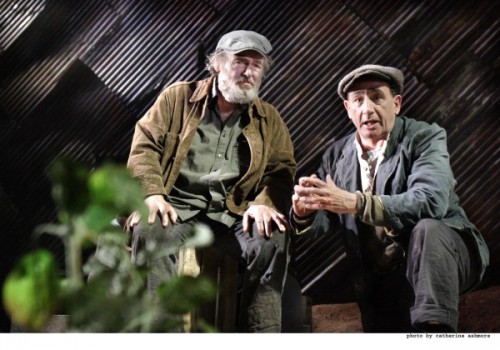 The story is epic and the circumstances are even familiar. The English had conquered, occupied, and colonized Ireland for centuries. They used most of Ireland’s best lands for the raising of cattle, which they then exported back to London. As a result, the Irish people were relegated to menial labor and subsistence farming, working the land in much the same grueling way serfs worked the land, exchanging crops for rent. On this poor land, the crop of choice became the potato. When the potato blight hit Europe in the 1800s, Ireland’s native population was devastated because of their near total dependence on this one crop. The action of this drama is simple: what does one do when starvation strikes and the people do not have the power to affect change or solutions?

John Connor is the elder of the village. As played by Brian Doherty, this elder possesses the nobility of patience and the will to do what is right. Unfortunately, for him, however, in this situation with starvation increasing daily, what is right might not be what will alleviate the suffering of his family and the people. Doherty captures magnificently that anguished dilemma, giving passivity a nobility unto death.

Connor is not without opposition. In fact, opposition surrounds him, from within and without, and grows more acute as more and more people starve to death.

The chief antagonists from within his own people are represented by the O’Leary brothers, Malachy and Mickeleen. Played by Garrett Lombard and Aaron Monagham respectively, these two brothers have come to see Connor’s nobility as a death warrant; their subsequent resort to armed conflict embodies the birth of the Irish Republican Army. Lombard’s gritty portrayal of Malachy’s desperation is spot on, whereas Monagham’s physicalization of the crippled Mickeleen and his call to arms couldn’t strike a more forceful pose.

What we have seen by play’s end is the birth of modern Ireland.

One of the play’s most chilling scenes also introduced the play’s chief antagonists. Entitled “The Relief Committee,” this scene brought together the county’s powerbrokers, represented by the church, the whiskey maker, the landowner, and the merchant. With the famine getting worse by the day and the English government decidedly silent on solutions (ironically, the play makes reference to England’s involvement with the First Anglo-Afghan War), the church has brought together the business community to alleviate the people’s suffering. When Rory Nolan’s Captain Shine delivers his accusations against the Irish poor and their culture of dependency, the audience sits in stunned silence that the unspeakable has been spoken. When Niall Buggy’s Father Daly repeats for the forth time his plea for a solution to the people’s dire situation, the audience understands what is about the take place. Finally, when Edward Clayton’s Mr. Simmington, agent of the English aristocracy, presents their solution—the coerced emigration of the Irish poor to Canada–the audience does not so much sit in judgment of the powers-that-be but rather numb acknowledgement that profit continues to trump people and their circumstances even today.

Finally, as in the earlier two plays of this trilogy, recognition must be given to the women. This play begins, as did the others, with a woman staring searchingly into the void around her. Perhaps, that void is the patriarchal structures that define her world, or perhaps that void is the utter emptiness left to her possibilities if she dare not trespass against the rules. In A Whistle in the Dark, the lone woman on stage violates the social norm and offers the only act of courage. In Famine, however, Maeve Connor, John’s rebellious daughter, strides forth as the survivor. Played with subtle determination by Beth Cooke, Maeve presents the audience with a protean self, capable of enduring change even as she refuses to surrender.

Director Garry Hynes, his creative team, and the entire acting ensemble has once again created the images of great theatre.  Lighting designers Chris Davey does a particularly fantastic job pictorially defining the play’s pathos at each turn and leaving the audience with visions it won’t soon forget.

Famine’s unique power lies in its perspective. A mytho-poetic historical drama that does not make larger than life people out of its characters, Famine presents a people’s struggle to survive within the severest of conditions. Although the situation it presents is unique to Ireland and its Great Famine, the conditions that are explored are unfortunately more universal than anyone would like to admit. The conditions that test a people’s ability to endure, the conditions that present a stark choice between ethics and survival, the conditions that ultimately lead to violence and revolution are everywhere present in our world. Famine gives audiences that rarest of opportunities: a sober glimpse into the dynamics of those conditions, not offering misguided or inane solutions, but rather that even rarer of flashes—understanding.

The DruidMurphy trilogy plays in sequence at The Kennedy Center on Saturday, October 20, 2012.

Running Time: 2 hour and 40 minutes, with one intermission.

Review of Conversations of a Homecoming.