Theatre Review: ‘Drunk Enough To Say I Love You?’ at Single Carrot Theatre 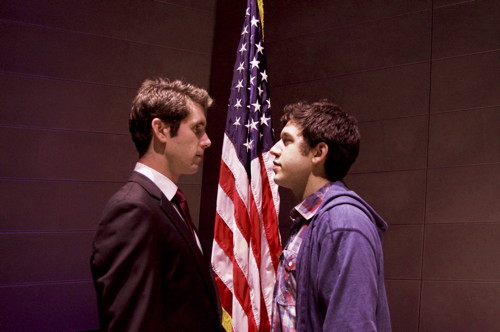 Single Carrot Theatre’s production of Drunk Enough To Say I Love You?, written by Caryl Churchill and directed by Ben Hoover encapsulates the entire realm of modern American politics in the relationship between two homosexual men.

Sam (Elliott Rauh) and Guy (Dustin C.T. Morris) are two men with a love/hate, dominant/subordinate relationship.  Sam, a symbol of American political beliefs, is powerfully seductive, and Guy, a symbol of John Q. Public, tries hard not to fall for every line, justification, and lie Sam throws at him.  Guy wants to resist and question Sam’s justifications on stockpiling nuclear, traditional and bio warfare weapons and his forced total commitment to necessary steps toward foreign diplomacy, rigged elections and carbon emission, but Guy is overcome by his love and need for Sam, which keeps him in the relationship.

…a wonderful experience.  The fearlessness and passion of the actors and the production staff was tangible.

They speak in fragmented sentences, each one finishing the other one’s thought.  Some thoughts are finished in the way they were meant, others in ways the other man hoped.  When Guy begins to feel disillusioned with Sam’s many hardline beliefs, Guy leaves to return to his other, more sheltered life with his wife and children. He finds himself unable, however, to resist Sam’s sexuality and magnetism for long.

Morris is very believable as Guy.  His innocence and unquestioning wonder in the first few acts (of this eight-act play) are deftly conveyed through his facial expressions, voice and body movements.  Although some of the dialog is hard to follow, Morris’s acting decisions help move the play along. 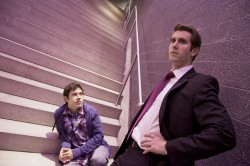 Rauh plays a super-power very well as a fast-talking, promising charmer.  He promises security and love that sounds too good to be true, and most times it is.  The touch of sliminess he adds to his character is just enough leave viewers with the feeling of shaking hands with a snake oil salesman who smiles while carefully stealing your wallet out of your back pocket.

Ben Hoover’s decision to set the play in a kitchen, centered around favorite foods of Americans, is a choice that may not have worked as well as intended.  I found that the making of food and the mess that follows was too distracting from the message of the play.  At times, Guy and Sam seemed more focused on their stage business than their relationship and themselves.

This was my first Single Carrot Theatre production and overall it was a wonderful experience.  The fearlessness and passion of the actors and the production staff was tangible.  I was reminded of the importance of this type of theatre that provides independent and creative productions, and I am looking forward to many more shows at Single Carrot.