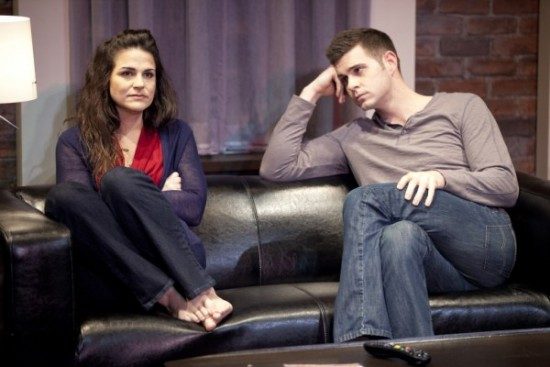 To be sure, this two-person psychoanalytic exploration of love and death by Christopher Shinn presents a challenge. Set in New York City in 2004, Kelly (Rachel Campelli) still mourns the death of her soldier husband, Craig (Thomas Keegan), when Craig’s gay twin actor brother Peter (Thomas Keegan) knocks on her door one evening. What follows is a brutal, and frequently contradictory, examination of a strange love / hate triangle, with the Iraq War lurking in the background. Peter, it seems, wants to father a child with Kelly. Kelly, a therapist, wants more than anything to understand how she could have so misunderstood her husband and their relationship. Craig, it seems, had not been the man she married, but rather a misogynist in search of redemption. In the end, Kelly wants more than anything to disappear.

‘Dying City’ takes a swipe at that culture that has become too content with the superficial and too complacent about its ills.

Dying City premiered in 2006 at London’s Royal Court Theatre and then at the Lincoln Center Theatre in 2007 and was a finalist in that year’s Pulitzer Prize competition. It is a script with vivid, engaging dialogue, but one that requires great care and trust in both acting and direction if it is to succeed. Not only does the play’s action bounce back and forth between the night of Peter’s visit and the last night Kelly spent with her husband, but the characters also leave as much unsaid as they do said. In other words, Shinn does not provide a full story, complete as Eugene O’Neill would have done with a searing look into a long night (the play, Peter is currently performing in). Thus, the actors and the director need to fill the silences with behavior, and not be tempted to push through them, as so much modern theatre does in these days of action-oriented film and sensation-seeking thrills. 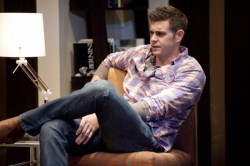 Unfortunately, director Matthew Gardiner gives into temptation and does not nurture this play’s difficult, and sometime mercurial driving force—the desire to heal. Without that through-line as spine, the sometimes powerful moments of this production have no cohesion, thus the show as a whole does not allow the audience to empathize fully with the characters. Moments which should have provoked double and triple takes (and in O’Neill’s case, long monologues)—such as when Peter tells Kelly that he loves her—were rushed through without so much as a stunned “are you serious” stare in disbelief, something that I most definitely was prepared for, and even yearned for.

Rachel Zampelli captures with sincerity the woman lost. Psychologically shattered both by her husband’s revelations and his “accidental” death in Iraq and his brother’s bizarre request to sire a child, Zampelli’s Kelly draws the audience into her desire to understand how her life came to be what it is. We want to figure out as well how she was so deceived. When Peter then gives her the opportunity to read a collection of emails sent to him by her husband, we want to read them as much as she does. When she then declines without so much as a whisper of desire, we’re disappointed; when she finally accepts, only to have Peter insist on reading them to her, we cringe at the narcissism. When they then reveal yet a deeper level of depravity, we can’t but feel pity for Kelly even as we shake our head in disbelief. 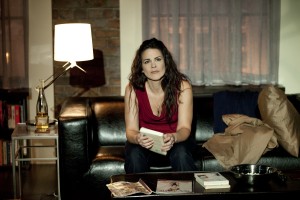 Thomas Keegan’s dual portrayal of Peter and Craig presents a real challenge to an actor. As the protagonist of this drama, Peter not only has to convince Kelly that he’s worth letting back in her life but also the audience that he’s worth caring about despite his self-centeredness. Keegan does well portraying Peter’s narcissism. We can enjoy both his vanity and cluelessness, as he stumbles from one faux pas to another, making even his arrogance likeable. What Keegan fails to give us, however, is Peter’s essential vulnerability, not so present in the words the character spoke but in the void the character had to embody.

I commend Signature for tackling this script and the important issues it attempts to address. We all know that the trauma of war, of violence, of hatred, of deceit needs to be addressed more frequently, and with more tenacity, in our theatre and art. Dying City takes a swipe at that culture that has become too content with the superficial and too complacent about its ills. We also know, however, that if we are going to succeed in addressing these deep rooted maladies, we are going to have to trust in a theatrical process comparable to the psychoanalytical process that Dying City mimics. We are going to have to sit back and let the drama come to us, and we are going to have to fill in the missing words and the absence with patience and deep breaths.

Running Time: 70 minutes, with no intermission.