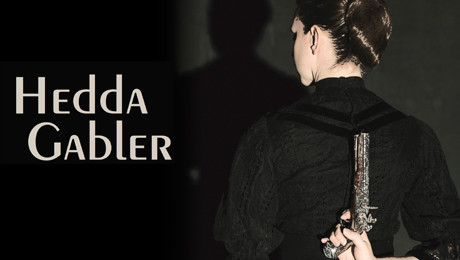 When one approaches Hedda Gabler, Norwegian playwright Henrik Ibsen’s 1890 masterpiece, one always does so with a bit of caution.  The play, one of the classics of 19th century objective realism, presents audiences with one of modern theatre’s most challenging and passionate female characters.  Hedda, a woman trapped within a rigid patriarchal society, possesses an almost Nietzschian will to power; yet, her need for respectability prevents her from rebelling against the men who constantly seek to control her.  Catholic University’s production of the classic has all the grandeur of the occasion, and at times reaches the ferociousness of its heights.  However, the tone of the story enacted remains too matter-of-fact to contain a woman who craves an aesthetic beauty “with vine leaves in his hair.”

Directed by Eleanor Holdridge, this Hedda Gabler gives us a world that is visually magnificent—perhaps even too magnificent for the prosaic story that follows.  With a creative design team that includes Luciana Stecconi (scenic design), Kendra Rai (costume design), Andrew F. Griffin (lighting design), and Christopher Baine (sound design), the production offers us a world of splendor.  Immaculate white walls that seem to rise miraculously out of the stage floor, a stove pipe and birch trees that rise like Babel into the heavens, a blue lit cyclorama that almost implores us to dream the impossible, crystal clear dramatic harmonies that aspire to beauty— at curtain we are ready for a mythic struggle to take place, albeit a battle on realistic turf.

…a visually beautiful, if flawed, world that acts as a reminder of the sometimes tragic consequence of idealistic passions.

When a desperate Hedda, played with grace by Amy Leigh Horan, emerges in the low somber light, she is dressed in a flowing garment that subtly simmers with light.  After she hustles about the stage looking, as it were, for an escape, only to fling open the fifteen foot double doors and flee, we are more than primed for a story that captures the strangled beauty of a woman with enormous ambitions but without the avenue to pursue them.  Then when Miss Julianna Tesman (Sammi Smedley) and the servant Bertha (Virginia Houley) enter with their work-a-day world views, we are slammed back into our mundane seats wondering where all the beauty went.  When George Tesman (Brendan McMahon) strolls in and recounts the hours he spent sifting through dusty archives—while on his honeymoon—we understand all too well the conflict of this play.  Hedda is an eagle trapped in a world dominated by sparrows.  These little birds are too small for the eagle to devour without invoking outrage from viewers, yet they are too omnipresent for the eagle not to swallow whole. 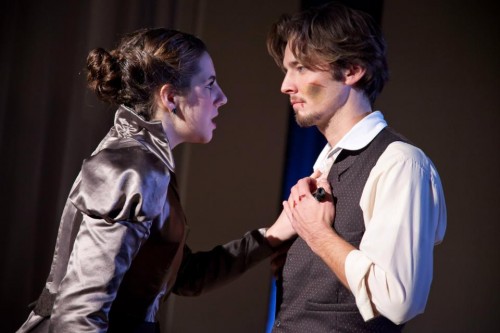 This production, with its splendid array of period costumes, creates Hedda’s boring, overly polite world with precision. McMahon’s geeky joy at having married the gorgeous Hedda couldn’t be more engaging.  Miss Tesman’s goodness and Bertha’s patient obedience couldn’t have been more on display.  The production even does well with the unsavory subtext teeming beneath a Victorian smile, in this case played with good vigor by Chris Daileader as the charming viper Judge Brack.  As the real power-broker of this play, as the man who evaluates the law and who determines a person’s respectability, Brack’s ability to toy with Hedda, like a cat with a mouse, was utterly disturbing.

Challenging the structures of this Victorian world is Hedda’s counterpoint, Mrs. Elvsted.  Played with fire and conviction by Nina Marti, this woman violates the social norms in pursuit of her passion.  Neither the academic nor the ascetic, Marti’s Mrs. Elvsted knows what she wants and pursues it no matter what obstacles others throw in her way.  Her love and commitment to Eilert Loevborg (Patrick Flannery), the play’s visionary historian, produced some of the production’s most powerful moments.

Where the production’s missed the mark, however, was in the story’s dynamic center, which lies in Loevborg’s daringness and Hedda’s obsession with the beautiful–not a beauty rooted in music or poetry, but in an earthy experience of life, and eventually death.  Flannery captures well Loevborg, the reformed alcoholic.  What I hoped to see more of was Loevborg the passionate dreamer, the man willing and able to see the future, the man who in times past had revealed his soul to Hedda Gabler. 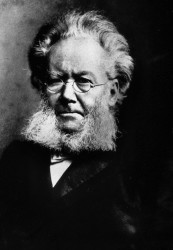 Loevborg’s relationship to Hedda lies at the heart of the play’s force.  When he comes back into her world, her contentment with the material status and the social respectability offered by Tesman loses its meaning.  Like two soul-mates reconnecting after a long absence, their relationship can only end in one of two ways: in a rebellious happiness ever after or in their mutual destruction. Horan’s portrayal of Hedda with Loevborg did not bring enough fire to that transformation.

Director Holdridge also attempted to represent this dynamic center by creating a stylistic parallel to the realistic world portrayed on stage, a world where the poetic aesthetic might live and breathe.  Although this parallel world worked quite wonderfully between scenes, in the ghostly semblances that traversed the stage, when it intruded into the scenes, with poetic asides or magical realistic flutterings from above, this stylistic trope was at best superfluous and at worst distracting.  As a result, the essential tension within the play, already strained, was undercut  further.

To a modern American audience so used to a materialistic culture without restrictions and, thus, without shame, the world of Hedda Gabler most certainly appears alien and too easily comic.  We so want to laugh at a world with hang-ups about proper conduct, polite conversation, honor, and respectability.  Perhaps it is so easy for us to see the dishonesty of such a world, that the behavior of those people becomes both ironic and farcical at the same time.  Bridging the cultural abyss between the world of Hedda and the world of America is no small feat.  Catholic University’s production of Hedda Gabler gives us a visually beautiful, if flawed, world that acts as a reminder of the sometimes tragic consequence of idealistic passions.