Theatre Review: ‘Hemispheric Dysfunctionalism and the Cortical Titanic’ at the Capital Fringe 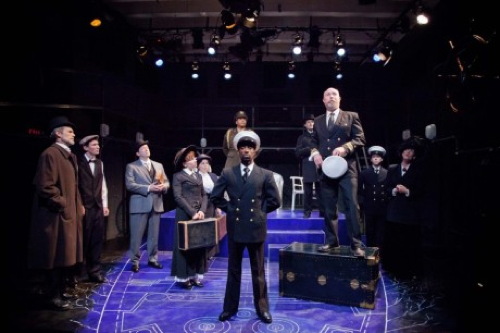 It is extremely unusual for a play program to include a works cited section, but Hemispheric Dysfunctionalism and the Cortical Titanic by Michael Merino, currently playing at the Capital Fringe, is no ordinary play. The century-old tragedy is brought up again from the depths of the sea as a conversation piece, a starting point in an hour-long discussion on the vagaries of perception, the fallbacks of modernism, and The Origin of Species.

‘Hemispheric Dysfunctionalism and the Cortical Titanic’ is thought provoking, entertaining, and somewhat funny, if occasionally confusing, and works by virtue of a fabulous ensemble cast.

Despite premiering almost twenty years ago, Cortical Titanic is still sufficiently avant-garde to be intermittently incomprehensible to the average audience member—lacking a formal narrative structure, with an emphasis on lecture as much as on performance. Essentially, the Titanic (the ship, not the play) is a juggernaut of modern scientific invention, doomed to failure by the folly of mankind as it tries to subject nature to its will, socially and physically. The ship’s radio operator (Phittles) struggles to get through his set of mundane telegrams while iceberg warnings roar above his head; the ship’s upper-class passengers seem to liken survival of the Titanic disaster to a function of social Darwinism.  As one man notes about the steerage class: “They’re not people, son, they’re southern Europeans.” There is a paraphrase of Emma Lazarus’s “The Great Colossus” as a reflection on good old-fashioned American xenophobia, a didactic treatise on modernity during calisthenics, and a card game where the suits seem to be parts of the brain. 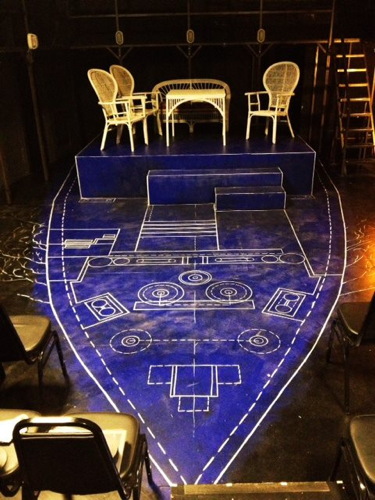 The set of ‘Hemispheric Dysfunctionalism and the Cortical Titanic.’

Despite some rather high-minded philosophy, there are moments of emotional brilliance. Captain Hazelwood’s (Ian LeValley) psychedelic entrance, as he struggles to gain command of the ship despite the lilting chorus of Lorelei (Katharina Acosta and Rachel Rollins) is strangely moving. The budding romance between English Pursimone (Megan Dominy) and American Jack Barron (Patrick Joy) is bittersweet, especially as Pursimone boards the lifeboats with the rest of the women and children. The show is excellently choreographed, thanks to directors Michael Merino and Kerri Rainbow, the set strikingly reminiscent of a 1910 cruise ship (right down to the white wicker deck chairs), and the music haunting, including a particularly beautiful rendition of “Nearer My God to Thee.”

Of course dramatic irony casts a shadow over the production, as obvious as the outline of the ship sketched out on the stage floor—on a chilly April night in the North Atlantic, the RMS Titanic went down with approximately 1,500 souls still on board, partly due to aesthetics (hence the lifeboat shortage) and partly due to the hubris of a society that dared named a ship “unsinkable.” But in short, Hemispheric Dysfunctionalism and the Cortical Titanic is thought provoking, entertaining, and somewhat funny, if occasionally confusing, and works by virtue of a fabulous ensemble cast.

Hemispheric Dysfunctionalism and the Cortical Titanic is playing through October 28, 2012 at the Capital Fringe, 607 New York Ave NW, in Washington, DC. For tickets and information, click here.