Theatre Review: ‘Holly Down in Heaven’ at Forum Theatre 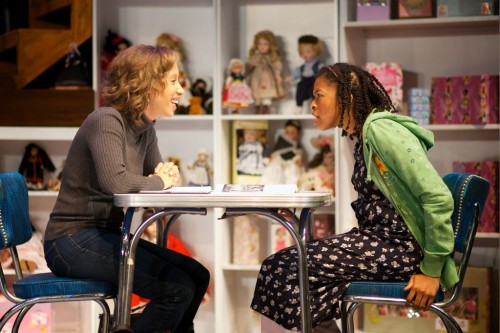 The Forum Theatre’s world premiere of Kara Lee Corthron’s new dark comedy Holly Down in Heaven is fabulous! Not only does it spur the imagination and rouse the intellect, but it also does what theatre is meant to do: it speaks directly to the world in which we live, and it does so in a refreshingly marvelous way. This show exemplifies why we should all encourage theatres to produce new works every chance they get.

The premise of Holly Down in Heaven is oddly simple. 15-year-old Holly has sex and becomes pregnant. Her parent has no control over the situation so Holly retreats to her basement to wait out the pregnancy. 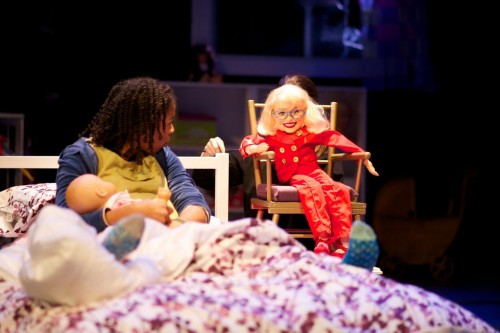 What makes the show so engaging is that Ms. Corthron has endowed the central character with every “issue” known to modern America. Holly is a gifted and talented student who knows it. She has absolutely no respect for her elders. She is an only child, with a single parent, an in-over-his-head father. She has a father who not only spoils her, but who also infantilizes her, treating her 15-year-old self as if she were still 9. She is struggling with issues of racial identification: she is a bi-racial child with a multi-racial doll collection. She is pregnant with a bi-racial developing fetus. She has recently discovered Jesus Christ, so now her fierce intellect collides headfirst with her determination to follow her faith. And did I mention her doll collection? She has over 200 of them in the basement, where she now lives, secluded from the world above. And did I mention her doll collection? She carries on conversations with them. Yes, conversations, not monologues; in other words, they talk back; until they don’t, which, according to the rules of the Cosmos, happens only after the maturation date. Then, to top it all off, she has a Superego that’s been shaped by the U.N. General Assembly (pity the poor child!) But no, she does not want to be pitied. So you might as well laugh, and laugh hard, despite the obvious pain she feels for her predicament, which might in the end make you feel empathy for her and the world we’ve made.

…a magnificent journey into the psychological landscape of a teenage girl, done with insight and humor

Maya Jackson does a superb job as Holly, not only capturing her overwhelming sense of confusion but also managing to keep us liking her in spite of the fact that she is so horribly ungrateful for the advantages she’s been afforded. Ms. Jackson embodies Holly’s complex world with humor, distress, cruelty, and empathy. She also navigates the 8-month dramatic through-line of the script, not only conveying this character’s anger at her predicament but also handling a convincing pregnancy walk across the stage weeks before the birth. 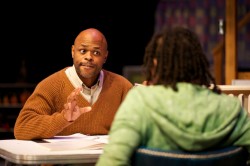 Joining Holly in her heaven at the bottom of the world is Mia, her recently hired tutor, played with good sense by Dawn Thomas, until, of course, she loses all sense, because this tutor has got some daddy issues of her own. And Holly’s Dad in this case is played by KenYatta Rogers, who turns in a wonderfully inventive performance as the giddy architect father who does not know the first thing about adolescent girls. Finally, there is Yager, Holly’s less-than-intellectually-gifted teenage love interest, who is played with genuine goofiness by Parker Drown. The feat he pulls with popping candy and coke is so archetypally teenage boy that you immediately know where he’s coming from, and where he’s going.

And did I mention those dolls. Vanessa Strickland, Luke Ciesleqicz, and KyoSin are the puppeteers (or should I say dolleteers?) They do a first rate job handling the many voices and giggling arms and torsos emanating from the shelves around the set, although a special nod must be given to the performance of Strickland’s Carol Channing doll, Dr. McNuthin. If any child needed psychotherapy, this Holly needed it; if any child might benefit from a strong dose of humor therapy, this Holly might, and this Carol Channing did the trick.

Director Michael Dove and his Creative Team of Steven T. Royal (Scenic Designer) Brittany Diliberto (Lighting Designer), Thomas Sowers (Sound Designer & Composer), Denise Umland (Costume Designer), and Debra Crerie & Day Rzasa (Properties Designers) put together a splendid scenography. From the long descent into heaven to the forceful wooden beams jutting from the darkness to the visually engaging cornucopia of dolls staring into space, the audience was transported into a world where all this wonder and terror might actually happen, and happen comically. 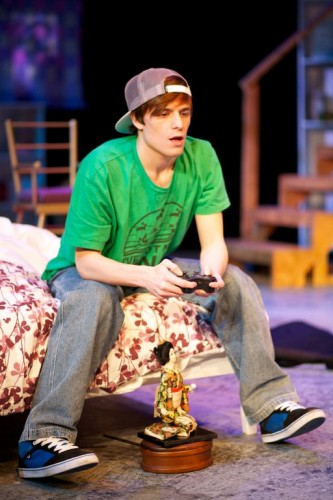 Kara Lee Corthron’s Holly Down in Heaven is a magnificent journey into the psychological landscape of a teenage girl, done with insight and humor—a rare combination these days of spectacle and gratuitousness. You might not buy the ending—ah, if only all of life’s problems could be solved by the birth of twins and Carol Channing performing a Broadway musical—and the cosmic doll collection might challenge your conception of the supernatural, but you’ll most definitely leave this show wondering what the gods hath wrought, or we adults have left to our children.

Advisory: some adult language, but nothing more than your twelve-year-old probably heard yesterday.

Holly Down in Heaven plays at Forum Theatre through October 20, 8641 Colesville Road, Silver Spring, MD. For information or tickets call 240.644.1100 or click here.