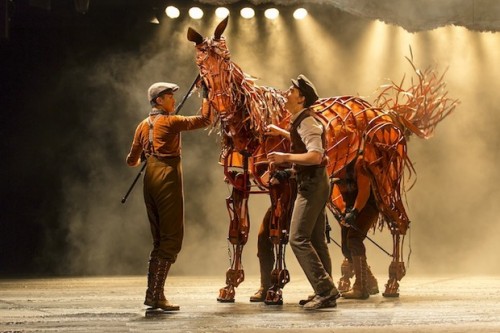 The Brits have been responsible for a lot of theatrical imports. Such mega musicals as Phantom of The Opera and Miss Saigon at least for me turned the musical theatre into a spectacle that relied on special effects and not on storytelling. The National Theatre of Great Britain’s production of War Horse has redeemed London’s reputation by telling an epic story in a very simple form. With virtually no scenery yet powerful acting and the spellbinding puppetry of Handspring Puppet Company, WarHorse is one of those shows that you simply should not miss.

What the National Theatre of Great Britain has done on stage is spellbinding.

Set against the backdrop of the beginning of WWI in Devon, we meet a 16 year old boy named Albert Narracott (Andrew Veenstra). Albert’s father Ted (Todd Cervaris) spends the mortgage money to win his son a horse at auction. Albert raises the horse, which he names Joey, into a working farm horse and when things get rough his father ends up selling the horse for 100 pounds to the army. As the story progresses we see the journey of Joey from foal to grown up horse. At one point he ends up as an ambulance horse for the Germans and your heart will break with the possible outcome at the end. That is an MTG teaser for which you have to see the show for the answer. At the heart of the story is a boy’s love for his horse and how he never gives up trying to find him. This is what I meant by an epic story told simply. War Horse is really a small story told epically without the material getting smothered by overblown production values. 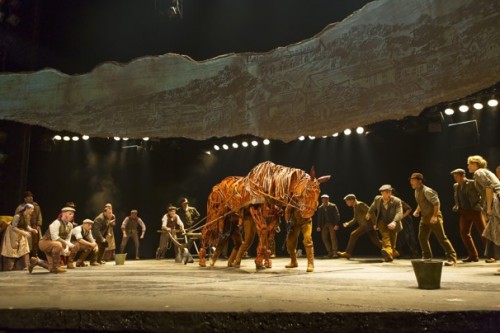 Joey with the cast. Photo by Brinkhoff/Mögenburg.

Acting-wise, this is a fine ensemble and everyone works together to tell the story. Stand outs include Andrew Veenstra as Albert. His performance is honest and sincere without being over schmaltzed. Other highlights include Andrew May as Captain Friedrich Muller who is conflicted about the war and shows a great deal of compassion for his own horse Topthorn. This is something you would not expect from a German Captain. As Private David Taylor who is Albert’s army buddy, Alex Morf  shows us how friendship can get you through anything including life threatening situations.

As good as the acting is–and it is excellent–the real star of this show is the work of South Africa’s Handspring Puppet Company, which created all of the giant horses and other animal puppets for this production. You will find Joey adorable  and the goose on the Narracaott’s farm, hysterical. It takes three puppeteers working in perfect harmony to operate the horses and I give a huge amount of credit to the puppeteers that are inside these creations all night. It cannot be easy dealing with the mechanics but Toby Sedgwick’s fluent movement makes it look like it is. The horses have a balletic quality to them.

Director Bijan Sheibani has adapted Marianne Elliott and Tom Morris’s original award-winning staging for this tour and has done so brilliantly. The first act finish will leave glued to your seat and, when the intermission lights come up, you will be left breathless. 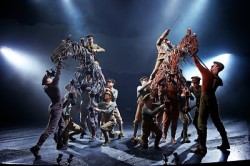 The Horses. Photo by Brinkhoff/Mögenburg.

Rae Smith’s minimalistic scenery and projection design never get in the way of the story. They just move us from place to place as they serve only as a backdrop to the fine performing company.

Karen Spahn’s lighting adaptation of Paule Connstable’s original really helps in creating the war scenes. With harsh white light the war is as vivid in this production as it would be in a movie without extra flash pods and gratuitous effects.

It is easy to see why this story has fared so well on screen and onstage and why such talented people are drawn to it. What Steven Spielberg did with his movie version was great. What the National Theatre of Great Britain has done on stage is spellbinding.

I highly highly urge you all to see this production of  War Horse. It shows us what good theatre is all about and in the process you get to witness a true theatrical experience.

Running Time: Two hours and 35 minutes including one intermission.

National Theatre of Great Britain’s War Horse plays through November 11, 2012 in The Opera House at The John F. Kennedy Center for Performing Arts – 2700 F Street NW, in Washington, DC. Tickets can be purchased by calling the box office at (202) 467-4600, or by purchasing them online.