Theatre Review: ‘One Night with Janis Joplin’ at Arena Stage 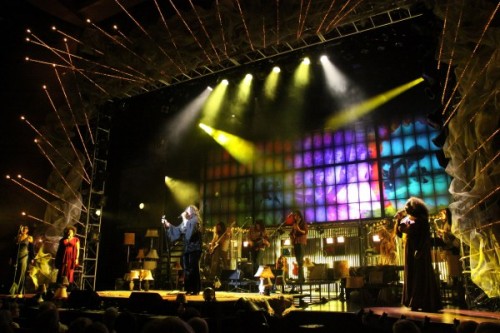 The cast of the Cleveland Play House production. Photo by Janet Macoska.

The irony of the evening could not have been thicker. Sitting in Arena’s fabulously revamped Kreeger Theatre waiting for One Night with Janis Joplin to begin, I surveyed the crowd. Janis Joplin, the singer who made famous the line “Freedom’s just another word for nothing left to loose,” was about to take the stage in front of—not thousands of screaming counterculture hippies in jeans and tank tops—but hundreds of aging boomers in suits and ties or fancy dresses and high heels. The outcast Janis Joplin, whose raw alcohol-enraged pain and incredible vocals could bring the house down, was about to step before a Washington audience of powerbrokers and big wigs intent on out-chicing the next guy. Could anything be more surreal? 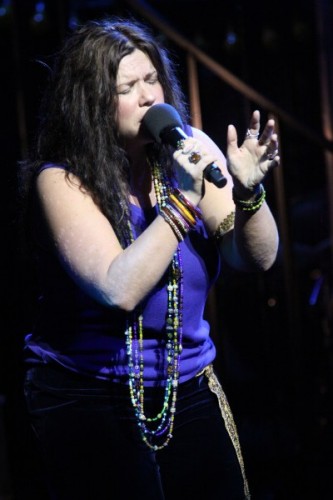 After the first few numbers I was beginning to wonder: could Janis survive as Janis inside such opulence?  Then, when the Blues Singer, Sabrina Elayne Carten, came on stage and delivered a beautiful and powerful rendition of Gershwin’s “Summertime” from Porgy and Bess—which could not have been more suited to Arena’s Five Star setting—the ante went up.  Mary Bridget Davies as Janis Joplin had her work cut out for her.  How could she ever top that?

Ms. Davies not only tops that, she topples the whole house. Davies delivers a Joplin “Summertime” that leaps off the stage and into the heart of each and every audience member. One Night with Janis Joplin instantly becomes a night you’ll long remember.

Joplin was more than a music icon; she was a-once-in-a-generation artist whose voice and style, and sheer willingness to abandon all restraints, so utterly identified who she was and what the 60s were that she cannot be duplicated. To Arena and co-producer Cleveland Play House’s credit, they understood the impossibility of their task.

The writer/director of the show, Randy Johnson, created an evening of theatre in the truest sense of the word. The story of the evening does not follow the tragic trajectory that Joplin’s own life followed. Although it touches on the narrative, its main focus celebrates Joplin’s musical roots in the Blues and on her ecstatic relationship with performance itself, as a place of release and a moment of transformation.

Mary Bridget Davies recreates Joplin’s style and chops without attempting to submerge the audience in Joplin’s mania and pain. At no point is the audience asked to compare Davies’s Joplin with the real Joplin whose brief five-year music career exploded like a supernova, both in terms of her stardom and in terms of her early death from a heroin overdose at 27. Instead, we can celebrate this Joplin’s joy, her exquisite talent and skill, as Davies delivers such classics as “Piece of My Heart,” “Try,” “Me and Bobby McGee,” and “Ball and Chain.” With each, Davies demonstrates Joplin’s incredible dexterity of emotions, her gravelly voice touching deep into the pain before roaring like a lioness for release: she leaves the audience begging for more. 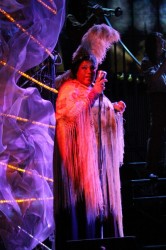 This show, however, is more than a tribute to Joplin’s music; it is also about her love for the Blues, oh yes those deep deep Blues. The show’s other star-attraction is the previously mentioned Sabrina Elayne Carten, the Blues Singer. In many ways Ms. Carten has an even tougher job than Davies, for she has to recreate multiple musical icons, from Bessie Smith to Etta James. But by far the most incredible rendition of the evening was Carten’s Aretha Franklin performing her own “Spirit in the Dark.” By the time the song was done, with Aretha and Janis on stage together, dueling like two prima donnas—one the Queen of Soul, the other the Queen of Rock and Roll—the audience couldn’t help but bust out of their ties and throw off their heels to bogie the night away.

The eight-piece band for this evening of joy was first rate as was the trio of backup singers: Laura Carbonell, Alison Cusano, and Shinnerrie Jackson, who couldn’t have looked and sounded hipper. Led by Associate Musical Director Stephen Flakus, whose guitar solos were memorable, the band expertly captured the various musical styles. Be it the string and piano (Tyler Evans, Patrick Harry, and Ross Seligman) for the soft beginning of “Me and Bobby McGee,” the horns (Anton Van Oosbree, Gavriel De Tarr, and David Milne) for a bluesy rendition of Bob Dylan’s “I Shall be Released,” or a drum solo (Mitch Wilson) that Aretha took notice of, the musicians joined in the celebration with rousing good cheer.

Joplin’s scenography was an interesting mix of concert staging and home décor, with the concert hall dominating the design. Set and lighting designer Justin Townsend provided ample opportunities for theatrics and showmanship while Jeff Cone’s costumes looked all the rage for whichever world he was trying to represent. 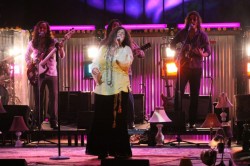 To be sure, One Night with Janis Joplin will not leave the audience nostalgic, for it does not take them on a trip down memory lane. Nor will the show leave them necessarily wiser about the makings of a great artist, for it is not a history lesson or a biography of one of Rock and Rolls’ legends. Joplin does, however, leave the audience filled to the brink with the sights, sounds, and rhythms of a great performer singing her own unique variation of the blues. And it is that vision of an artist’s love for the music and her love for the audience and the feelings that arise therefrom that make this performance such a vital and enthralling event.

Running Time: 2 hours and 20 minutes, with one intermission.

Advisory: Some mature content and adult language. Plus, some stobe lights and fog.

One Night with Janis Joplin plays at Arena Stage through November 4. 1101 6th Street, SW, Washington, DC. For more information or for tickets call 202 488-3300 or click here.