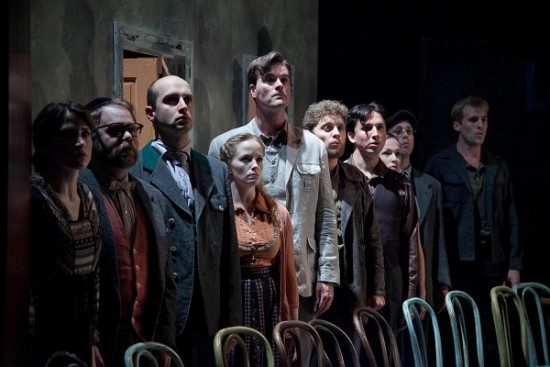 Theater J’s production of Our Class by Tadeusz Słobodzianek opened on Monday to a packed and appreciative house, including special guest Ryszard Schnepf, the Polish Ambassador to the United States.  His remarks at the start of the show, which spans eighty troubled years of Polish history, placed the production in a larger, ongoing historical context of remembrance and responsibility.

This show deserves such weight. Director Derek Goldman has assembled what is surely one of the best ensembles of the year, and the play stands as a heartbreaking testament to both the powers and failures of the human spirit. 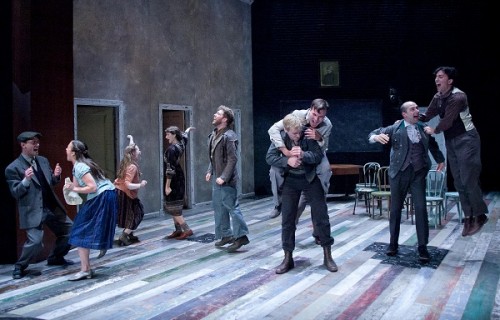 Our Class is based on Jan Gross’ book Neighbors and follows the lives of ten classmates—half Jewish, half Catholic—from the Russian occupation, to the Nazi invasion, the Holocaust, and on through the collapse of the Soviet Union. Słobodzianek juxtaposes the experience of Abram (Sasha Olinick), a surviving emigrant in America, with the chilling story of those who stayed behind. The class’ teacher is glaringly absent from the story, and as the play progresses, their collective friendship dissolves into an individual struggle for dominance and survival.

The scenes (or “lessons” as they are called) are interspersed with high-energy, multilingual, and often humorous choreography and songs, using nothing but chairs and the empty room (perhaps a nod to “Café Müller” and the late Pina Bausch). Even from the back row, the fight choreography is a bit off, and the violence is actually more disturbing when the actors drop the realist conventions—that is, when they are obviously not connecting with their victims, or remain fully clothed during scenes of rape.

…a heartbreaking testament to both the powers and failures of the human spirit.

The ensemble is uniformly excellent, and each of their stories is given roughly equal weight. Thus, it is difficult to list all of their strengths, but Dora (Laura Harris) and Zygmunt (Mark Krawczyk) stand out as opposing pillars of compassion and deceit. The cast executes each scene with gripping physical precision—the most striking example being the symbolic removal of shoes. The final scenes of the play slow down by a degree, but are lifted back up by Abram’s sprawling and hopeful enumeration of his offspring. 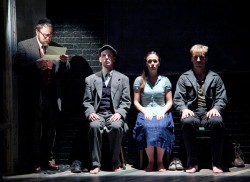 The cast moves with practiced efficiency around the stoic but textured set (Misha Kachman), while the subtle use of footlights (Daniel Wagner) casts ominous shadows across the stage. The sound design (James Garver) has an aged quality, as if coming through an antique radio. Lastly, as the show progresses, the vocal arrangements (Eric Shimelonis) become more fragmented and complex, mirroring the discord betwixt the classmates and their society as a whole.

This play demonstrates the power of live theatre to elicit a visceral and immediate response that is rarely found in other mediums.  To be sure, it is a difficult production to watch, but that is, perhaps, the whole point. These things happened, and watch we must.

The running time is 3 hours, with one  fifteen-minute intermission.