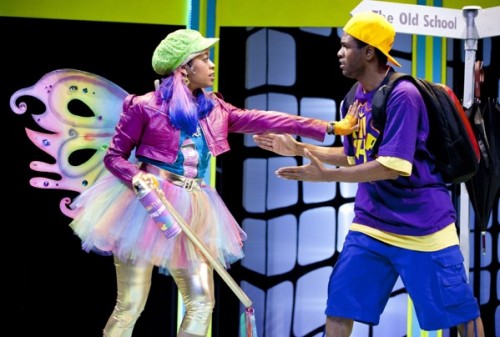 Paige Hernandez as Graffiti Fairy and Psalmayene 24 as P.Nokio. Photo by Scott Suchman.

P.Nokio: A Hip-Hop Musical, written and directed by Psalmayene 24 for Imagination Stage, takes the old-school tale of the 1883 children’s novel The Adventures of Pinocchio by Carlo Collodi, and propels it into the modern world by rocking the mic with catchy rhythmic music and chanted rhyming speech.

…an amazing job of making this show look and feel like a large Broadway musical.

The original Pinocchio was created as a wooden puppet but dreamed of becoming a real boy.  In this remixed version, P.Nokio (Psalmayene 24) is a computer-generated boy created by G.Petto (James J. Johnson) for a video game that, with the help of the Graffiti Fairy (Paige Hernandez), jumps off the 3 screens framing the top of the stage and becomes a 3-dimensional digital boy.   The audience is then invited to celebrate G.Petto’s joy of becoming a “father” by joining in the rap with G.Petto and P.Nokio for the song, “When I Say Father, You Say Son.”

G.Petto encourages P.Nokio to go to school to be the best rhymer he can be, because in their town of Hip-Hopia, a great rhyming style means success.  With the precious “Book of Rhymes” and all the money G.Petto has (5 street credits), he sends P.Nokio, off to school.  P.Nokio encounters a Fork (Katy Carkuff) in the road and is tempted to dance down the path toward the raucous music coming from Fun instead of boring school.  Choosing the easy path to Fun, P.Nokio soon runs into Fox (Jacob Yeh) and Cat (Katy Carkuff) and they are nothing but trouble.  Fox and Cat weasel P.Nokio’s street credits from him with lie after lie.

Sadly, P.Nokio returns home from Fun and finds that his father was kidnapped by the Machine Master (Jacob Yeh) and taken to, gasp, Disco Land, where he tries to force G.Petto to make a boy for his video game.   P.Nokio tries lying to help his father and to get his street credits back, but true to the classic story, his nose grows with every lie.  Ashamed, P.Nokio realizes his lies and poor choices have hurt the one he loves most and with his newfound courage goes to Disco Land to free his father.  The audience is encouraged to cheer P.Nokio on as he makes the ultimate sacrifice to save his father, and because of that sacrifice P.Nokio becomes a real boy.

The small cast and production staff of P.Nokio does an amazing job of making this show look and feel like a large Broadway musical.  Each actor has multifaceted talents that contribute to the vitality and flair of this contemporary and interactive hip-hop fairy tale.  Jiminy Cricket himself could not wish for more.