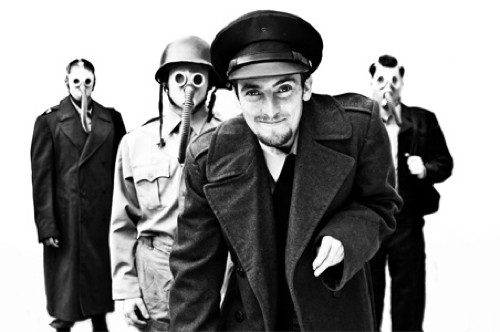 To quote one of Richard III’s henchmen, “Tis better to be brief than tedious.” Bearing this in mind, Chesapeake Shakespeare Company’s outdoor production of this great tragedy could be reviewed in four words:

The latter can be addressed first. Fall is hardly the season for outdoor theatre, and cold noses and toes are among the play’s many villains. Audiences should come prepared to be mobile and spend three hours in the October night.

Vince Eisenson, whose sensational performance as Richard is disarmingly affable from the start; his sickening smile is worn like a mask, right through to the play’s brutal conclusion.

That said, this particularly unsettling production comes just in time for Halloween and, in its staging, calls to mind a bloody, haunted house.  As the series title, “Movable Shakespeare” suggests, the audience follows the actors from scene to scene, winding around and through the ruins of an Antebellum school for girls.  The location is well-suited for the text, and resonates with the play’s unrelenting violence against women and children.  The building also served as a hospital during the First World War, in which this production is capably set. 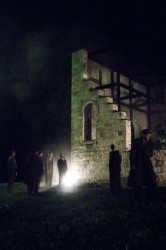 The play is the culmination of Shakespeare’s histories and chronicles Richard’s treacherous rise to the English throne.  His defeat marked the end of the Wars of the Roses, which established and legitimized the Tudor dynasty. Shakespeare, writing under Queen Elizabeth, a Tudor, had a vested interest in painting Richard III as a sociopathic tyrant, and in doing so, created one of the greatest villains of all time.

The cast is lead by CSC company member Vince Eisenson, whose sensational performance as Richard is disarmingly affable from the start; his sickening smile is worn like a mask, right through to the play’s brutal conclusion.  While Richard’s physical deformity is consistent, visible, and grotesque, his ambition takes on many forms, and Eisenson does a good job of letting the audience in on the joke.

Indeed, the central strength of this production (aside from the visual landscape) is that director Ian Gallanar doesn’t shy away from the play’s dark comedy. Instead, he grapples head on with Richard’s notion that murder isn’t just fun; it’s sexy, too. The tone swings back and forth with rapid delight—most dramatically between Clarence’s (Ron Heneghan) chilling premonition of death and his murderers’ (Jared Murray and Rebecca Dreyfuss) hilarious arrival.  The ensemble is well-selected, and some of the best performances are in smaller roles; Catesby (Jonas Grey) and Richmond (James Jager) are particularly strong. 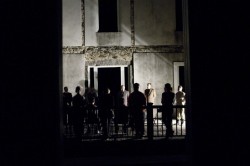 The design is appropriate for both the play and the time period; some ill-fitting jackets and anachronistic strobe lights aside, the stage picture is deeply compelling. Unfortunately, some scenes are blocked as if this was a proscenium theatre, or laterally with actors performing far off in the imaginary wings, but with the right seats or standing positions, this becomes less of an issue.  The ominous sound design (Ian Galanar) aides the transitions, and contributes to the overall, creepy feel.

Be warned; the location is not easy to find and requires a short walk to the entrance. Once there, however, the company directs the audience with efficiency and grace.

Running Time:  2 hours and 50 minutes with one intermission.