Theatre Review: ‘Titanic: The Musical’ at the Dundalk Community Theatre 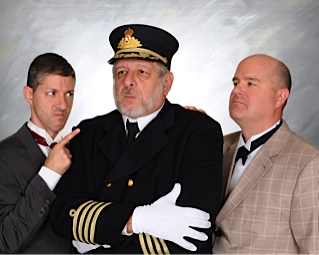 The Dundalk Community Theatre navigated the poignant and touching production of Titanic:  The Musical to the greater Baltimore area on October 26, 2012 at the Community College of Baltimore County in the John E. Ravekes Theatre.

The Baltimore docking of Titanic:  The Musical brought with it the story that originally opened on Broadway, in New York City, in 1997, is based on the ill-fated maiden voyage of the RMS (Royal Mail Ship) Titanic.  Beginning its voyage at the departure point of Southampton, England with plans to sail to New York in six days, struck an iceberg on April 15, 1912 and the ship that was known as unsinkable, sunk one hour from dry land.  One thousand, five hundred and fourteen lives were lost.  Most were lower class passengers (second and third class) that were excluded from the lifeboats due to the shortage of lifeboats installed on the RMS Titanic and the lack of access of the lower class passengers had to the upper decks.

…this production of ‘Titanic’ could hold its own against any Broadway cast and definitely deserved the standing ovation.

With such a grim outcome Broadway analysts and theatre gossipers doomed the show before it opened.  However, because its story and songs address the disparities of the class system, the struggles of immigration, and mankind’s vulnerability in the face of nature, and it follows passengers and crew members that actually existed and were aboard the Titanic back in 1912, the Titanic went on to win five Tony Awards for Best Musical, Best Book, Best Original Score, Best Scenic Design, and Best Orchestrations in 1997. 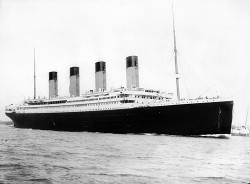 Another difficulty is staging the sinking of the largest ships and how to portray the utter devastation in live theater.  Marc W. Smith (Scenic/Lighting Design/Technical Director) did a brilliantly realistic job by using a diagonally hung scaffolding as the deck of the sinking ship, and the during the “Mr. Andrew’s Vision”, the actors had to help themselves and others fight gravity to make their way up to the prow of the boat. 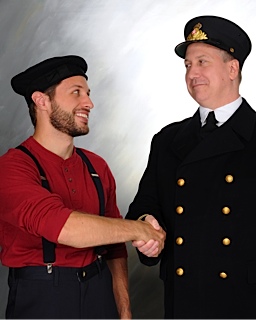 I also must mention two cast member standouts.  The first, Rob Tucker as Fred Barrrett, had wonderful stage presence as the muscular coal stoker for the ship, and his voice is as good as, if not better, then all his muscles.  The second is Chuck Graham for his very believable delivery of a self-important, all-knowing ship’s radioman, Harold Bride.  He brought many smiles to a very sad show.

The only piece of this production that was a bit off course were some of the costumes, some were right on period and with fit (most of the first class women passengers), but others were a bit distracting, (the Capitan’s coat not buttoned correctly, no dirt on the white shirts of the coal stokers, Billionaires in “formal” wear without white bowties and some ill-fitting and unnecessary wigs).

Never the less, this production of Titanic could hold its own against any Broadway cast and definitely deserved the standing ovation.