‘A Quick 5′ with Chic Street Man 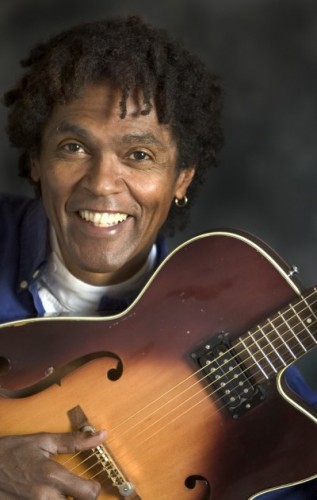 Chic Street Man is currently playing the role of Professor Slick in Arena Stage’s production of Pullman Porter Blues.  He is the composer of Spunk, a show in which he originated the role of Guitar Man at Joseph Papp’s Public Theatre in NYC. He has since performed the show at the Oregon Shakespeare Festival, the Crossroads Theatre in New Brunswick NJ, the Mark Taper Forum, and at Centerstage. Other regional credits include Ma Rainey’s Black Bottom (Seattle Repertory), Lost Highway (Mark Taper Forum), Native Son (Intiman Theatre), The Caucasian Chalk Circle (Berkeley Repertory Theatre), Touch the Names—Letters to The Vietnam Veteran’s Memorial (Cleveland Playhouse), A Lesson before Dying (Alabama Shakespeare Festival), It Ain’t Nothin’ But the Blues (Denver Theatre Company) and Polk County (McCarter Theatre, Berkeley Repertory Theater). He has seven albums to his credit including his latest Lullablues. He is the founder of Chic Street Man’s School of Performing Arts; has been a featured performer at various U.N. events; and is the composer of Permutations, which was aired on PBS Great Performances. Film credits include Triple Bogey, Hangin’ with the Home Boys. Chic Street’s many awards wins include an Audelco Award, NAACP Theatre Arts Award and a San Francisco Bay Area Theatre Critic’s Circle Award for Musical Direction. He is on the teaching staffs of the Heifetz International School of Music and the Seattle Conservatory of Music.

My mother sang with Fats Waller. When I was seven, she bought me my first guitar. However, I had no interest in playing it. It was just something I could call my own and didn’t have to share with my brothers and sister, and that made me fall in love with it. I would go to sleep at night staring at it. And then one day our house was broken into and the guitar was smashed. A second guitar made it into our home when I was sixteen. My older brother showed me a couple of chords and I took it from there. It was fun to have with me wherever I went, and I played it all the time, especially when I wound up in the USAF. I constantly listened to Sonny Terry & Brownie McGhee, Big Bill Broonzy, Lightnin’ Hopkins and BB King. It was their influence and that of my mother’s singing around the house that focused my musical journey.

You composed the music for the play Spunk and have performed in multiple productions. How did you originally become involved with the show and what are your memories of putting together the original production?

I was living in Santa Barbara, CA. I had founded Chic Street Man’s School of Performing Arts when a call came to do Lost Highway: The Hank Williams Story at the Mark Taper Forum in Los Angeles (my first professional theater experience). George C. Wolfe was about to workshop Spunk some months after Lost Highway closed and called me for the music. We did a reading of Spunk and then workshopped it at the Mark Taper forum. I worked directly with George designing the music. He would say “I need something here and there.” I would propose what I could from my arsenal of folk blues. He would say yay or nay. Working with George was the quintessential experience for me because of the profound way he had of explaining what he was looking for.

Can you please tell us about your character in Pullman Porter Blues? 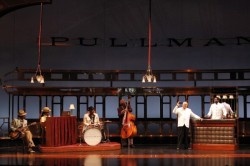 In Pullman Porter Blues, I play a character called Professor Slick.  Cheryl L. West has written a very important piece of theater. The story is one that has implications far beyond a brief expose of the blues. It displays an important part of the growth of African-American culture heretofore not so much revealed as blacks migrated north, east and west. Professor Slick plays a small part in bringing some levity to the story with his bluesy guitar musings.

Can you please tell us about Chic Street Man’s School of The Performing Arts?

I am a great believer in the healing power of music…the power to heal the spirit, transform emotions, bridge cultural and social divides and inspire hope. I have a degree in psychology. I worked for a year as head of the Psychodrama Department at the Community Hospital of the Monterey Peninsula in Carmel, CA, and then decided it was time to take my chances with pursuing a career in music. I left for Europe and recorded my first LP (album) in Paris, France in 1975. I toured throughout France for more than a year and finally returned to California. I saw that the two worlds of psychology and music overlapped. Time and again, doctors, patients, staff and families back at the hospital would all say “The best therapy we ever get around here is when Chic brings his guitar to work”. And, that’s how I got the idea for Chic Street Man’s School of Performing Arts. I ran it as a grass roots kind of operation for anyone looking to become more comfortable expressing themselves. We had voice teachers, improvisation teachers, dance teachers, etc… My class was all about stage presence and just being comfortable as yourself. The classes were really open to doctors, plumbers, secretaries, gardeners, poets, musicians, dancers, lawyers, clerks, and more. I ran the school for nearly eight years until I was informed by a handful of consultants that if the school were going to grow and establish long-term security, I would have to stop doing my own music and become executive for a good five years. I was unwilling to do that and so the school closed, although I have taken it on the road with a series of workshops called “The Freedom of Expression.”

What are your next few projects after Pullman Porter Blues closes?

I am on faculty at the Heifetz International Music School in Staunton, VA, as well as the Seattle Conservatory of Music. I have written a piece for theater called “Hattie’s Ax” which I am hoping to get put up. I have several middle, elementary and high school assemblies lined up in the coming year. I am working on a new CD with somewhat of a Brazilian flavor, I have a few children’s stories I want to have published and am completing my first feature mystery novel. I also have more “Freedom of Expression” workshops lined up. And the beat goes on.