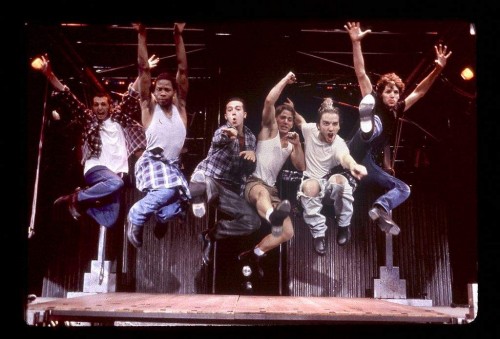 Saturday’s performance of Dein Perry’s Tap Dogs at Strathmore combined performative genres in ways I could have never predicted. If six tap dancing construction workers teamed up with the Jets and the Three Stooges, and they all put on a rock concert–that might come close to describing this show. With original set design and direction by Nigel Triffitt, Tap Dogs kept us on our toes. It was an immensely unique and brilliant performance. 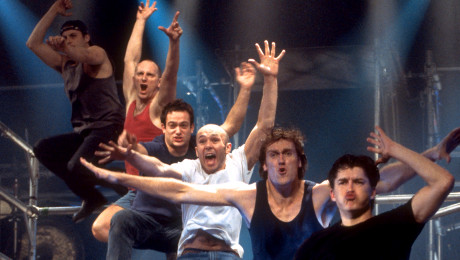 In actuality, Tap Dogs originated in Newcastle, Australia, the home town of creator Dein Perry. The show has its roots in the steel industry of Australia, where Perry worked before starting a career in show business. The set looks like a construction site and is rearranged and reassembled throughout the performance by the team of dancers. These Australian industrial roots explain not only the set design, but also the intentional lack of formal costuming and footwear. Dancers James Doubtfire, Mackenzie Greenwell, Donovon Helma, Anthony Locascio, Dominic Mortezadeh, Chaise Rossiello, Anthony Joseph Russo, and Matt Saffron were all dressed in some combination of flannel shirts, ragged jeans, and T-shirts and wore “tap shoes,” which, in this case were actually work boots fitted with metal plates on the soles. The effect was that of an ordinary day on the construction site: burly men using heavy machinery, and furiously tap dancing while they work.

With a continuously changing set, a percussion artist, and six outstanding tap dancers, Tap Dogs take tap dancing to places it has never been before. The 80-minute performance without intermission was broken into several “scenes,” ranging from slapstick comedy routines to a tap dance and basketball number. I even had to be thankful for my seat in the back of the orchestra during a scene in which water was splashed all over the stage and audience. The Dogs were perpetually entertaining, outrageously talented, and full of surprises. 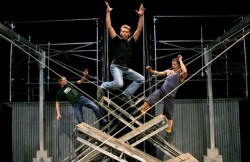 Although there was no narrative, there was no shortage of character. Each dancer had a different personality, which was revealed to the audience in pieces. There was your smooth-tapping lead “dog,” who acted as mentor; the eager show-off, who more than once ended up on his face; and the baseball-cap-wearing goofster, who loved to be the center of attention. There was not a single weak link, as every dancer showcased his individual talent and engaged expertly in complicated group choreography (not to mention the bit where they hoisted a fellow dancer into the air for an upside down number).

…an immensely unique and brilliant performance.

The intermittent belts of “Yo!” may have been the sole verbal exchange, yet this “conversation” of feet said a lot. It said that fine arts doesn’t necessarily mean fancy costumes and beautiful sets, and that manly men can also be exquisite dancers. The coolest thing about Tap Dogs was how “cool” it made tap dancing.

Tap Dogs was presented at Strathmore Music Center in Bethesda on November 24th, with performances at 4 pm and 8 pm. For more information about shows at Strathmore click here.