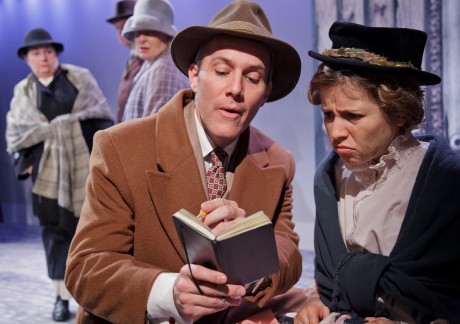 The beauty of a George Bernard Shaw play is in the dialogue, and in Pygmalion, no one has sharper lines than the phonetician Harry Higgins (Steven Carpenter), who from the beginning sets the stage with his punchy bravado and an almost annoying amount of self-confidence. Although some of the other actors don’t match Carpenter’s aura or wit, they set him up perfectly for zingers that keep the audience on its heels, waiting for the romantic twist or Hollywood ending that never comes. 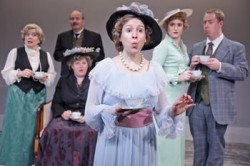 Based on the Greek myth of Pygmalion’s love affair with the statue he created, the play, which debuted 100 years ago in England, centers on Higgins’ experiment in trying to transform Eliza Doolittle (Rana Kay) from a poor flower girl to a lady of society. The transformation inevitably goes a little bit too well, and Doolittle asserts her rights as a new member of society.

Kay’s accent and opening lines as the flower girl, however, seem forced, but she executes the transition into society well. And when trading barbs with Carpenter in the final act, Kay unveils her newly-found independence and her talent as an actress.

…keeps the audience on its heels, waiting for the romantic twist or Hollywood ending that never comes.

Doolittle’s father (Conrad Feininger) is perfectly cast and Feininger offers a disturbingly believable showcase of the British middle class – astonishing both Higgins and the audience. His longer, articulate speeches are particularly well suited to his skill. Higgins’ mother (Lynn Steinmetz) also serves as a great foil to her son’s over-exuberance as she accurately portrays the British upper class without overdoing it. 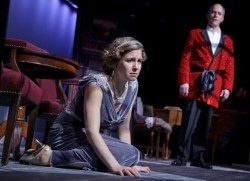 Perhaps better known as the musical My Fair Lady, which was adapted from the film version of the play, the play offers the same biting social critique of the British class system and the same questions on whether hard work, proper manners, and stilted speech are all that separate the classes. Shaw’s dark comedy also seeps through in some of the more dramatic scenes, such as when Doolittle and Higgins spar over his intentions in transforming her.

Although Kirk Kristoblas’ set design lacks the punch of some of the more well-funded theater groups in the area, the interesting lighting design and the presence of the actors makes up for it.

Pygmalion runs through Nov. 18 at the Undercroft Theatre, Mount Vernon Place United Methodist Church, 900 Massachusetts Avenue NW, Washington, D.C. Tickets can be purchased for between $40 and $50, either by calling (240) 582-0050 or ordering them online.