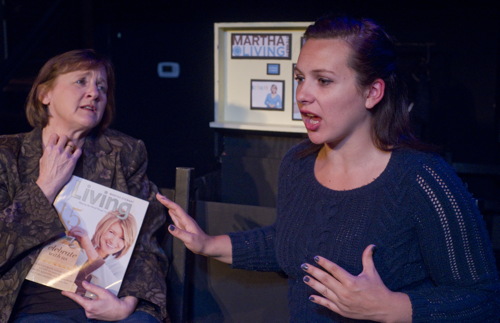 The Strand Theater Company’s Inexcusable Fantasies is an ode to skeletons in the closet. Playwright and lead actress Susan McCully opens the play with a nervous wringing of her hands and a sudden outburst of words, like a slam poet who has waited anxiously for her turn at the mic all night. She takes the audience on a journey through her complex identity, and the ride is deceptively funny.

McCully’s self-deprecating humor keeps the play moving, but the strength of her characters stick with you after the last laugh. The play has a frantic energy, like living inside the brain of someone who thinks ten thoughts at once. McCully portrays the sort of multifaceted female character that ought to appear more often in the theatre. She’s too smart for her own good, hopelessly verbose, and drunk on her own words. Obsessive perfectionism and exquisite sentence structure are like aphrodisiacs to her.

The play never veers into the self-serving, woe-is-me trap that has garnered many autobiographical plays notoriety.

She monologues about “the trope of blindness” and how her eyes, transplants from a cadaver, do not allow her to cry without physical pain. She has male swagger in place of feminine wiles, but longs to be desirable as a woman. She worships Martha Stewart and aspires to be like Davy Crocket and “swig whiskey without wincing.” At times, her heightened language feels forced, but she counters those moments with sublimely simple lines like “I’ve been at war with my body as long as I can remember having one.” She captures what it’s like to feel inexplicably screwed up.

It’s inspiring to see a woman onstage whose neuroses are not downplayed as cute. Her quirks have a mind of their own. She is fully aware that she makes some people uncomfortable. “I’m afraid there’s something very wrong with my desires,” she says. The play never veers into the self-serving, woe-is-me trap that has garnered many autobiographical plays notoriety. McCully spends her time analyzing her issues, not wallowing in self-pity. 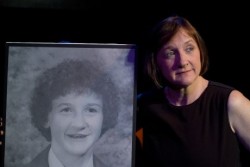 Sarah Ford Gorman and Wendy Salkind complete the cast. Gorman delivers equally solid performances as a germophobe copy editor for Martha Stewart Living, and as McCully’s frustrated partner Joan. Salkind plays McCully’s scientist mother, who praises genetic engineering as a way to ensure that future children will not end up “less than pretty” (or worse, feminists) like hers did. Salkind plays the satire of the scene without losing the undercurrent of genuine disappointment.

The production feels homemade, like a group of neighborhood kids putting on a play in someone’s backyard. Set pieces are minimal and serve multiple functions. The costumes are requisitioned street clothes from the actors’ closets. The actors create the world without help from a heavy-handed design concept. Most of the time, director Eve Muson’s handiwork operates without calling attention to itself. The homegrown sensibility works for the piece, but makes the rare unjustified directorial choices feel extraneous.

The result of Inexcusable Fantasies is a reassuring sort of weirdo solidarity. Through the filter of her experiences, McCully encourages you to feel at home with your own strangeness. The production provides laughs for people who like to be entertained and substance for those inexplicably weird people who like an emotional workout with their theatre.