Theatre Review: ‘Into the Woods’ at George Mason University’s Center for the Arts 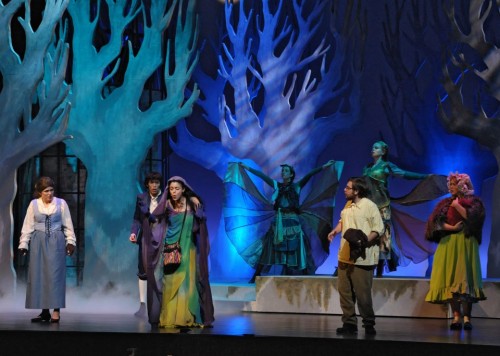 Into the Woods. Photo by Beth Rado.

What if happily-ever-after doesn’t turn out that happy? Into The Woods, the 1987 Sondheim-Lapine musical, performed spritely in a collaboration between George Mason University’s School of Music and its Department of Theater, ponders this question and offers a sobering answer in song and dance.

Based on the Brothers Grimm fairy tales, the piece whimsically presents the lives of the beloved children’s stories we’ve come to know. The original stories collected by Jacob and Wilhelm Grimm in the early 1800s serve up life as generations of central Europeans knew it—capricious and often cruel. We’ve sanitized some of these tales for bedtime reading, but the original versions were more grim and realistic than we ever knew.

… a vibrant exposition of the tales…

The musical intertwines the plots of several Grimm fairy tales and follows them to explore the consequences of the characters’ wishes. The main characters are taken from “Little Red Riding Hood”, (Lil Red and Mr. Wolf), “Jack and the Beanstalk” (Jack and Mom), “Rapunzel”(the flaxen haired damsel), and “Cinderella” (Cinderella, the prince, and her nasty family). 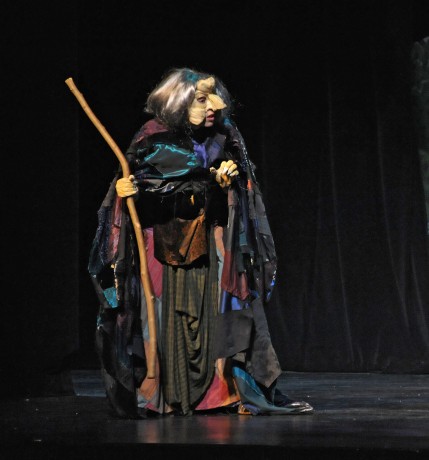 It is all brought together by an original story involving a baker and his wife–the one truly realistic story. They wish to begin a family, and are caught up dealing with a neighboring witch, who sets them off on a quest to lift a curse from their family. This erupts in a dizzying display of interconnected storylines, as they strive to complete their quest to bring to the witch what she desires for a special potion.

Much credit is to be given the collegiate performers, ably directed by Ken Elston, with Music Direction by Dennis M. Layendecker, for nimbly handling the frantic activity in a fun and fresh manner. Sondheim’s music, notoriously quick and quippy, can be a challenge for young performers, but there were few signs that they were over-matched by the material. They created a vibrant exposition of the tales as it unfolded.

Act I standouts were Rob Swanson as the Wolf singing “Hello, Little Girl” to Little Red Riding Hood as he playfully and ominously circled her. Jack , played by Rafael Medina, wondering about “Giants In The Sky” and the Baker and his wife, Kyle Imperatore and Cara Pelligrino, in a heartfelt “It Takes Two.”

But as Act 2 opens, fairy tale, version 2.0 sets in. All the characters seem happy but are, ironically, still wishing: The Baker and his Wife have their precious baby boy, but wish for more room; Jack and his mother are rich and well-fed, but Jack misses his kingdom in the sky; and Cinderella is living with her Prince Charming in the Palace, but life is ho-hum (“So Happy”). Even our Prince Charming has a wandering eye stating “I was raised to be charming, not sincere. ” We also have The Witch dealing with the loss of her powers, which is never good.

And then a Giant problem appears. This Giant is a woman (visually portrayed by a ten-foot hand operated by magic makers, the faerie-like enablers of the otherworldly action), the widow of the Giant that Jack killed in chopping down the beanstalk. She is terrorizing the kingdom and her booming voice proclaims that she wants Jack’s blood in revenge. The Witch has the voice of calculated survival, even without her powers. (“Witch’s Lament”).

After exposing their insecurities, each character takes responsibility for their future as best they can, banding together even as they watch several die, to finally slay the Giant. A more sober, thoughtful group remains, and the cast did well in transition to reengage their roles in a realistic way.

Many notable performances were given. The Baker played his nebbish role convincingly. Partnered with his wife, they provided voices of reason in an upended world. Cinderella, played by Kate Merryman, showed nice vocal range and stayed away from the cliché in her role. The Witch, played by Brittany Martz, showed such stage command and emotional and vocal range that you were hard pressed to take your eyes off her.

Set design was clean and functioned well, but ended up a bit stale, relying on the several trees that simply went up and down. (we get it, we’re in the woods…) Dramatic lighting would have been an effective tool for creating mood and offset, but was not used as well as it could have. Costumes were nicely balanced in bright primary colors. The narrator and magic makers were especially dressed in imaginative, fanciful costumes.

This fanciful turned evocative production is the start of a collaboration between GMU’s School of Music and Department of Theater and launches a partnership for a certificate program for musical theater studies at Mason.

With this talented cast and crew, they have exhibited the resources they can draw from to deliver quality musical theatre to Northern Virginia. We are looking forward to their next ambitious collaboration.

Running Time: 2 hours and 50 minutes with an intermission.