Theatre Review: ‘Love, Loss and What I Wore’ at the Fells Point Corner Theatre 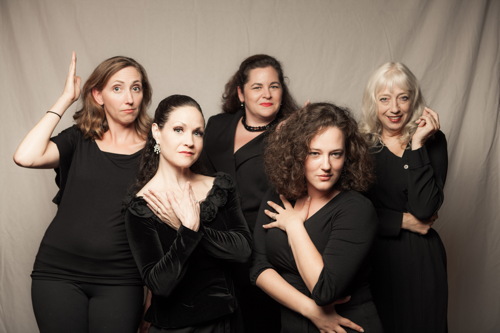 The late, great Nora Ephron once said: “I try to write parts for women that are as complicated and interesting as women actually are.” Love, Loss and What I Wore, co-written with her sister Delia and currently playing at the Fells Point Corner Theatre, is the culmination of that ideal.

This play began as a questionnaire that Nora and Delia Ephron sent to a hundred friends. It evolved into a story about the associations women make with clothes—how they relate them to memories, feelings and pivotal moments in their lives. Five actresses depict the narratives of over a dozen different women, dealing with issues that range from gay marriage to breast cancer to the relative merits of Birkenstocks. It’s a surprisingly interesting and moving narrative—every woman can relate to the humiliation of buying the first bra, or of an unexpected period. These various stories, told against a backdrop of fuchsia rose petals, are occasionally punctuated by the amateur drawings of Gingy (Helenmary Ball), a woman who catalogues every event in her life through the clothes she wore: a homemade Brownie uniform, an elegant gown, the first store bought dress occasioned by her mother’s death.

Particular highlights include a rant by Andrea Bush about the inconvenience of purses, Anne Shoemaker as a rape victim who foreswore miniskirts but retained her favorite boots, Beverly Shannon as a Latin gang member talking about her first sweater, and Kate McKenna as a woman in love with a convict. It was a good ensemble, the group occasionally unifying to agree on something (in one memorable instance, all dancing to Madonna’s “Vogue”). While often funny and occasionally touching, it did feel as though there were some missed punch lines, or moments that might have been funnier with adequate delivery.

In terms of set design, the play is by definition pretty minimalist, but set designer Roy Steinman and set builder Kevin Heckathorn deserve kudos for an absolutely stunning backdrop. There were blackouts, which, as I’ve noted before, I mostly despise, but they were relatively brief. Some light, relevant music might be beneficial as a relief during blackouts.

Personally, I’m not a fan of fashion. A lot of people may likewise be turned off to the idea of this play for the same reason: who wants to hear about clothes for an hour and half? But the fashion aspect is really more of a story telling mechanism than a focal point—this is really a series of monologues about the everyday human experience, and how we can keep memories alive by retaining objects that remind us of them. It also serves as an important reminder of the important things in life: love, loss, and a good pair of boots.

Love, Loss and What I Wore is playing at the Fells Point Corner Theatre, 251 S. Ann St, Baltimore, through December 9, 2012. Click here to purchase tickets online.