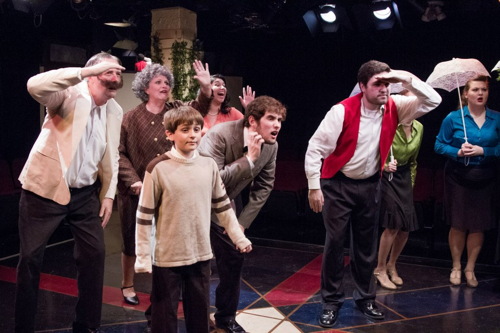 The cast of Mame at Spotlighters.
Photo by Ken Stanek.

When you think of a big-time, splashy, iconic musical such as Mame, you imagine (or recall) it unfolding on a grand stage of a Broadway theater.  You also picture colorful scenery, period costumes, a huge orchestra in the pit and a terrific storyline with a memorable musical score.  Mame ran on Broadway from 1966-1970 for over 1,500 performances and garnering three Tony Awards (Angela Lansbury, Bea Arthur and Frankie Michaels) and was nominated for five other categories.

So when Fuzz Roark, artistic director for the Audrey Herman Spotlighters Theatre, booked the show for the friendly confines of that venue during its 51st season, one can appreciate the challenges that awaited him and his staff.  But the courageous Roark and company pulled it off.  The production of Mame at the Spotlighters plays big in the little theater that could.

…it triumphed because of the magnificent book and score, direction, execution by the talented cast and crew, creativity, and the fearlessness of Fuzz Roark for taking on this ambitious treat for an appreciative audience.

Mame is an extremely fun musical with the book by Jerome Lawrence and Robert Edwin Lee and music and lyrics by Jerry Herman (Hello Dolly, La Cage Aux Folles). Originally titled My Best Girl, it is based on the 1955 novel Auntie Mame by Patrick Dennis and a 1956 Broadway play, by Lawrence and Lee, which starred Rosalind Russell.

The Spotlighters version boasts well-casted, talented performers and a strong supporting crew.  Director Allan Herlinger is masterful in keeping the production as close to the original as possible and was creative in making use of the limited space to allow this show to be as strong as it is.

Set mainly in New York just before the Depression, the show centers on the title character, Mame Dennis played delightfully by Michelle 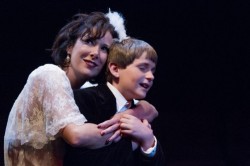 Michelle Guyton as Mame and
Austin Brannan as Patrick.
Photo by Ken Stanek.

Guyton.  Mame, an eccentric fun-loving sort had her life change when her late brother’s 10 year-old son Patrick (Austin Brannan) was entrusted to her care.  Her lifestyle did not meet the standards of the executor of Patrick’s father’s estate, Mr. Babcock (Larry Pinker) and shipped the boy off to a boarding school in Massachusetts.

Mame tried to cope with this loss as she had developed a deep love for the boy as her only living relative.  When the stock market crash hit in 1929, Mame lost everything and tried a string of odd jobs, which comically ended up in failure.

While working as a manicurist she met an aristocratic Georgia plantation (Peckerwood) owner Beauregard Jackson Pickett Burnside (Greg Guyton—Michelle’s real-life husband).  Mame won over his skeptical family with her charm and her astounding fete of catching a fox in her hands during a hunt.  They married but alas, he was killed in a mountain-climbing accident while on their honeymoon.

Flush with cash from the inheritance, widowed Mame began her new life of comfort still surrounded by her “bosom buddy” Vera Charles (Eleni Densmore), her secretary Agnes Gooch (Allie Dreskin) and her housekeeper Ito (Patrick Long).  Mame reunites with grown-up Patrick (James Ruth) only to discover he became a snob and plans to marry Gloria Upson (Sara Ritmiller) who is also a snob from a family of bigots.

But Mame, using a devious, hilarious plan, sets up an event that brings Patrick to his senses and ends his marriage plans to Gloria.  He goes on to marry another young lady, and Mame takes Patrick’s young son to India as the show ends.

As enjoyable as the plot is, Jerry Herman’s superb score is the backbone of the show.  He had originally tried to cast Judy Garland to play the original Mame but her managers believed she couldn’t handle the stress of an eight-show per week Broadway regimen.

Of course, the title song “Mame” is a well-known smash hit that was performed magnificently by Greg Guyton and the chorus.  Yet, the score is so excellent that there are several other numbers that have become favorites over the years and are synonymous with Mame.  Among them are: “We Need a Little Christmas,” “Open a New Window,” “My Best Girl,” “If He Walked Into My Life,” and the wonderfully comedic song “Bosom Buddies.” 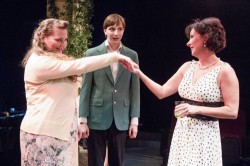 Michelle Guyton has an abundance of personality to play the likable Mame.  Her movements were fluid, and she commanded the stage as one would expect from her character.   Guyton’s lovely singing voice excelled throughout the show; her rendition of “If He Walked Into My Life” was as emotional highlight.

Eleni Densmore as Vera Charles, Mame’s sidekick, an actress who enjoyed a cocktail or ten, was also strong in her role.  Though lacking the baritone voice that only Bea Arthur could serve up as she did in the original Broadway production, Densmore played the role to the hilt.  The duo knocked “Bosom Buddies” out of the park.

Austin Brannan as young Patrick is a scene-stealer.  He sings well, dances, acts and has precise timing which is quite amazing for an 11 year-old.  His future in theatre is bright.

Another standout is Larry Pinker as the stuffy Dwight Babcock. He played the villain role deliciously.

The remainder of the cast also excelled especially during their musical numbers.  All were involved in scene changes, and with nearly 20 cast members in the action, they were able to move freely without bumping into each other.

Kudos to Michael Tan and his 3-piece orchestra for skillfully presenting the tuneful songs and enhancing the quality of the vocals.  And Laura Nicholson did a fine job of designing costumes that were true to the era.

Mame at the Spotlighters does not have the benefit of a spacious stage with vast wings to mount this wonderful production.  But it triumphed because of the magnificent book and score, direction, execution by the talented cast and crew, creativity, and the fearlessness of Fuzz Roark for taking on this ambitious treat for an appreciative audience.

Running Time: Two hours and 20 minutes with one 20 minute intermission.

Mame runs through December 23 at the Spotlighters Theatre, 817 Saint Paul Street, Baltimore.  Tickets may be purchased by calling 410-752-1225 or online.