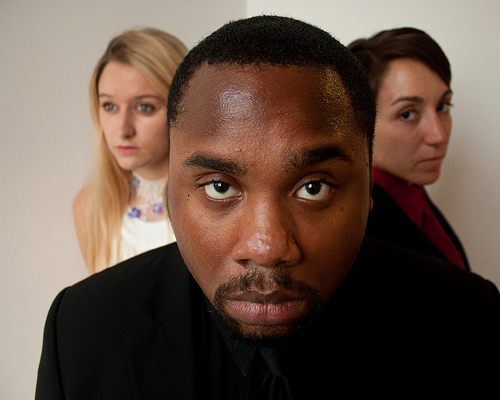 Madi Furguson is Desdemona, Will Carson is Othello, and Melissa O’Brien is Iago in the Mobtown Players’ production of ‘Othello.’
Photo by Kelly Brady.

Othello is “the greatest love story Shakespeare ever wrote,” explains Marshall B. Garrett in his director’s note for Mobtown Players’ production. He’s not talking about the doomed romance of Othello and Desdemona. He means the love Iago has for Othello. He means a story of betrayal and jealousy, but from the villain’s perspective. It’s a concept with tons of potential, a fresh spin on the cautionary tale to end all cautionary tales.

Unfortunately, the execution of Garrett’s direction does not deliver. Instead of using his innovative perspective to build on what Shakespeare provides, Garrett has a serious case of tunnel vision, and strips the play of its complexity. He focuses so much on the pathos of Iago that the other characters lose much of their substance.

Melissa O’Brien and Will Carson breathe new life into old characters, and live up to the potential of an original, thought-provoking concept.

Garrett’s narrow focus is most apparent in the staging, which lacks creativity and a sense of spatial reasoning. The group scenes are sloppy, with characters strewn about the stage, engaging in the action only with their facial expressions. Important conversations take place at odd ends of the stage, behind draperies, and so far upstage that you can hardly see the actors. A good five seconds of dead air creeps into the play at each scene transition, as actors wait for everyone on the stage to vacate before making their next entrance. 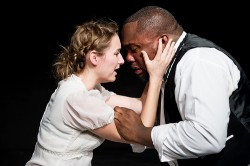 The design concept employs amateur symbolism to tell the story, and it just isn’t necessary when the play has been stripped down to its most obvious parts. The characters are dressed in black, white, and red, according to their moral standing. Desdemona, the innocent, wears white. Othello wears white at the top of the play, but is dressed in black as jealousy consumes him. Iago, the villain, wears red. It’s fitting that the characters are dressed in extremes, because the production implies no moral ambiguity. You know for sure that Desdemona is faithful. You know that Iago is up to no good. There is no grey area. Garrett makes a bold choice in presenting the characters as absolutes, but is it the most interesting choice? He does his concept a disservice by suggesting with the design that there is no more to Iago— or anyone else— than meets the eye.

Garrett’s concept does peek through in the scenes between Iago and Othello. Melissa O’Brien’s Iago is all smarm and charm, a decadent parasite feeding off the energy of his surrounding hosts. This is not a cerebral, brooding villain— this is a man of action. Will Carson’s Othello is all savagery and eloquence. He delivers his lines with honesty and conviction, making his transformation into a savage, spitting maniac even more disturbing. There are moments between Iago and Othello that are truly extraordinary. Watching the disintegration of Othello and Desdemona’s relationship is nowhere near as haunting as watching Iago pull a shroud over Othello’s body in the final moment of the play. Their relationship is varying and intangible. Iago, who is usually bombastic and wins every argument with no more than a glare, relates to Othello with a fascinating sort of fear and respect. Othello, who is suspicious of everyone, trusts Iago completely. You don’t understand the exact nature of their relationship, but you sense its importance, and that’s what makes their end so tragic. 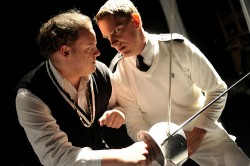 Roderigo and Cassio.
Photo by Will Kirk.

The supporting characters get a little lost in the background. Madi Ferguson plays an innocent, reliable Desdemona, who is most noteworthy in moments of complete meltdown. Tess Pohlhaus’ Emilia is as flighty as Desdemona, and you have wonder why Iago married her. She doesn’t provide much of a challenge beyond the occasional nagging comment. Her words of wisdom come from the page, not from the heart or a wealth of personal experience (that she must have, being married to a man like Iago). The male supporting actors are not entirely believable as men of the military, dukes, or senators. You are never quite sure what objectives they are pursuing, or if they’re really all that interested in pursuing them in the first place. Perhaps this is because they are left high and dry in the group scenes, with little to do besides playing eye ping-pong when an argument breaks out.

It is unfortunate that Garrett was unable to pay the same attention to detail to all aspects of this production, rather than staying wrapped up in the “love story” and expecting the rest of the play to fall in line. What separates this production from scores of other Shakespeare reimaginings is the performances of its two lead actors. Melissa O’Brien and Will Carson breathe new life into old characters, and live up to the potential of an original, thought-provoking concept.