Theatre Review: ‘The Strange Undoing of Prudencia Hart’ by the National Theatre of Scotland at Shakespeare Theatre Company 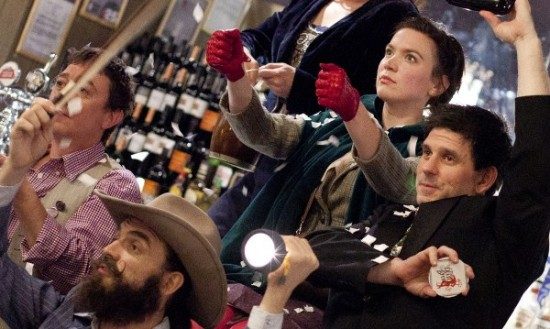 Midwinter, 2010. It is the worst winter in seventeen years on the island of Great Britain, with record low temperatures and a steady cover of snow over the nation of Scotland. On this, the longest night of the year, academic Prudencia Hart sets out into the cold from Edinburgh to a lecture in Kelso, a distance of some forty miles. Little does she know that the longest night will last approximately four thousand years.

… there is a sense of wonder and mystery to this play reminiscent of old campfire stories, told on a dark, chilly night.

This is the premise of the National Theatre of Scotland’s The Strange Undoing of Prudencia Hart, a funny, brilliant, and fascinating production from the Shakespeare Theatre Company. It is also a truly unique experience.

So-called “found” theatre productions tend to be rare, and generally serve a specific purpose. In this case, for the first time in the STC’s history, one does not attend this show in a theatre, but in a pub—the Bier Baron Tavern, to be exact. It is a very casual atmosphere, punctured with small cups of Speyside scotch and the sharp, haunting sounds of bagpipes. This is not only a play but a story, in the vein of a Scottish folk ballad, told in rhyme, about a young woman lost in the cold on the night of the Devil’s Ceilidh. 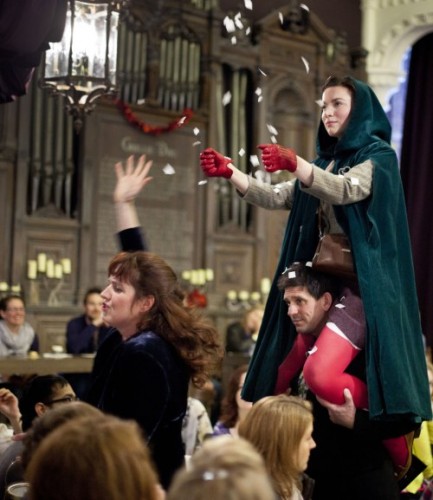 The blend between modern and ancient is in fact captivating. The conflict arises in superficial form as Prudencia (Melody Grove) attempts to lecture an audience (the audience, in point of fact) on the merits of the Scottish Border ballad, while her Hawaiian shirt-clad rival Colin (Andy Clark) believes that study of folklore should be “less Tam Lin and more like SuBo.” At the pub after the conference, the night’s revelries include a bacchanal to Katy Perry’s “I Kissed a Girl,” Prudencia does her makeup to a folk incantation, and a group of middle-aged Scottish women (played mostly by men) describe a session of drunken debauchery that would have made the Marquis de Sade wince. And that’s just the first act, before Prudencia discovers that hell is not other people but a Bed and Breakfast run by the charming, terrifying, and ultimately vulnerable Devil (David McKay).

As far as performances go, this is hands down one of the best ensembles I have ever seen. It takes a certain amount of finesse to cavort around a space limited by any number of bar tables and drinking patrons. Choreographed special effects enabled the cast to mimic the actions of a car in the snow—one waving a stick for a windshield wiper, another lifting the driver and moving her around the bar, another turning on a flashlight to mimic bright headlights. Audience members were encouraged to tear apart napkins and throw them at the actors as snow. The blare of a kazoo sounded like the revving of Colin’s motorcycle. And the music? Masterfully played and arranged by musical director/composer/actor Alasdair Macrae, while Annie Grace’s singing (as a council estate specter) was simply stunning, lilting and oddly affecting. 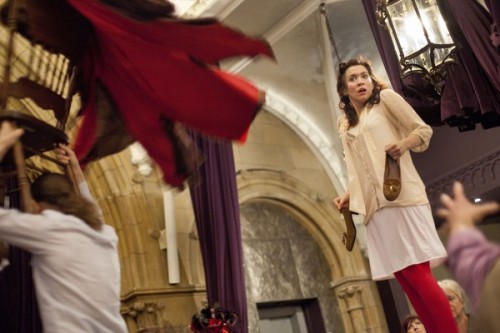 Clark’s performance as Colin exhibited a sense of excellent comedic timing and abundant enthusiasm, at once insufferable and hilarious, with a character arc that gained real humanity as the show went on. Grove’s turn as Prudencia was great, as she went from a cold-hearted academic to a shy wallflower to a frantic captive to a woman in love. Her chemistry with McKay’s Satan was electric, while her ballad rendition of Kylie Minogue’s “Can’t Get You Out of My Head” was not amusing as expected, but virtually heartrending.

This is not a show for children, but seeing as it takes place in a bar, perhaps that can go without saying. Even so, there is a sense of wonder and mystery to this play reminiscent of old campfire stories, told on a dark, chilly night. A knowledge of Scottish culture is not necessary to recognize and enjoy a good old-fashioned supernatural tale, and this is a ghost story for a new age, but as touching and interesting as Tam Lin must have been centuries ago.

Running Time: 2 hours and 30 minutes with a 15-minute intermission.

Advisory: Not for children.

The Strange Undoing of Prudencia Hart is playing at Bier Baron Tavern, 1523 22nd Street NW, through December 9th. Tickets can be purchased by calling (202) 547-1122 or by clicking here.