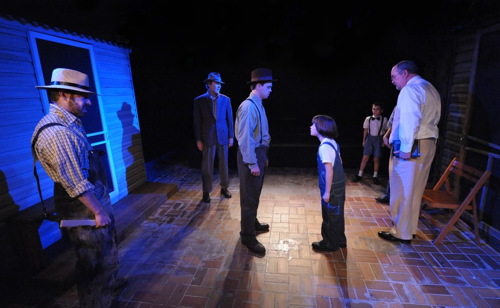 The cast of ‘To Kill a Mockingbird.’
Photo by Stan Barouh.

Compass Rose Studio Theater is kicking off their second season with Christopher Sergel’s adaptation of To Kill a Mockingbird, the Pulitzer Prize-winning novel by Harper Lee.  The iconic story—a child’s perspective on her father’s defense of an innocent black man in Depression-era Alabama—may be familiar to most theatergoers, but is delivered with vigor and immediacy by this intimate production.

According to their mission statement, Compass Rose is “both a workshop studio and professional performance theater founded in the belief that theater education creates performance excellence.”  Judging by this production, that mission is a smashing success.  The children in the production—who are cast age-appropriately—are clearly receiving both excellent training and the opportunity to showcase their talents. Nine-year-old Maggie Baum, who plays Scout, a younger version of the narrator (played capably by Elizabeth Jernigan), leads this coming-of-age story with remarkable confidence and skill.  She is well complemented by Timothy DeSimone, who gives a charming performance as her childhood friend, Dill.  Their innocence and curiosity about the unfamiliar—those who differ from themselves, behaviorally, racially, and otherwise—provides a lens through which the audience can view their prejudiced society.

…is delivered with vigor and immediacy by this intimate production.

Still, this is a world dominated by adults (for better or, more often, for worse). Gary Goodson is spot-on as Atticus Finch, and leads a well-rounded ensemble through the world of the play. The trial scene is particularly successful, with striking performances from Lonnie Simmons (Tom Robinson, the accused) and Olivia Ercolano (Mayella Ewell, his white accuser).  Michael Dunlop, as Sheriff Heck Tate, has a solid sense of character and gives voice to the play’s take on justice and morality. 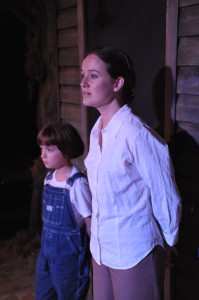 Indeed, Lee’s profound humanism—her belief in the essential goodness of man, however corrupted—is well suited to the stage. Seeing these established characters in flesh and blood, the audience is drawn into the racial conflict at hand and silently invests in the assertion that progress is happening, if not as quickly as we might hope—an argument that seems as relevant today as it did in 1935.

Under the direction of Brandon McCoy, the play is staged in the center of the theatre, more-than-subtly placing the audience in the position of jurors, often to great success. The lighting (Eric Bowers), while necessarily simple in such a small space, shifts noticeably to facilitate the moments of storytelling, in which the piece reveals itself as a memory play.  Meanwhile, Julie Bays’ costume design gives an excellent sense of both period and status within a sharply divided world.

Audience members should get their tickets early, as performances are already selling out, and, having attended the production, it’s easy to see why.