Tops 5 Shows of The Week

1. My Fair Lady at Arena Stage

During the show I had to ask my friend several times for tissues because I was crying with joy.  That is a good sign that I truly enjoyed the show!

“…a TRIUMPH…. I could have watched this show all night and still have begged for more!” -Mark Beachy, MD Theatre Guide

Synopsis: Just as Molly Smith’s record-breaking production of Oklahoma! was enthralling audiences at Arena, her fresh reinterpretation of My Fair Lady set the all-time box office record at the prestigious Shaw Festival in Canada. And now Molly is reassembling her creative team to bring this breathtaking musical to Arena Stage. When Professor Henry Higgins wagers he can transform a Cockney flower girl into an aristocratic lady, he never guesses that Eliza Doolittle will in turn transform him. Lerner and Loewe’s sparkling score includes such enduring favorites as “I Could Have Danced All Night,” “Wouldn’t It Be Loverly,” “The Rain in Spain,” “On the Street Where You Live,” and “Get Me to the Church on Time.” Based on Shaw’s most incisive social satire, My Fair Lady is a joyful, crowd-pleasing celebration for the entire family. 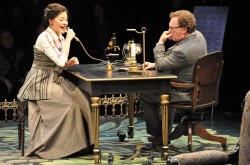 2. Million Dollar Quartet at the Hippodrome

Wear your blue suede shoes and walk to the Hippodrome to see this fun show!

Synopsis: MILLION DOLLAR QUARTET is the smash hit musical from Broadway, inspired by the true story of the famed recording session that brought together rock ‘n’ roll icons Elvis Presley, Johnny Cash, Jerry Lee Lewis and Carl Perkins for the first and only time. On December 4, 1956, these four young musicians gathered at Sun Records in Memphis for what would be one of the greatest jam sessions ever. MILLION DOLLAR QUARTET brings that legendary night to life, an irresistible tale of broken promises, secrets, betrayal and celebrations featuring a score of rock hits including “Blue Suede Shoes,” “Fever,” “That’s All Right,” “Sixteen Tons,” “Great Balls of Fire,” “Walk the Line,” “Whole Lotta Shakin’ Goin’ On,” “Who Do You Love?,” “Matchbox,” “Folsom Prison Blues,” “Hound Dog,” and more. This thrilling musical brings you inside the recording studio with four major talents who came together as a red-hot rock ‘n’ roll band for one unforgettable night. Don’t miss your chance to be a fly on the wall of fame… at MILLION DOLLAR QUARTET! 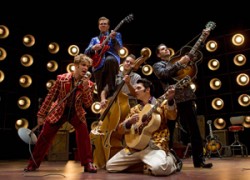 The cast of ‘Million Dollar Quartet.’ Photo courtesy of the Hippodrome.

3. The Princess and the Sprout at the British Players

The British Players keep their traditional holiday pantomime alive with this production which will surely bring a smile to your face.

Synopsis: Queen Snobalott is determined her son shall only marry a true princess, so when one turns up in the middle of the night, a pea under the mattress is the least of her problems. But the Prince’s heart has already been lost, and the Princess has set her heart on someone else too… 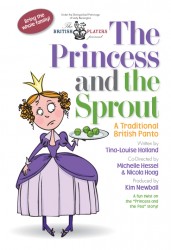 Synopsis: The Ingalls are hosting some of their friends and relatives for a pre-Christmas dinner when a sudden storm threatens to cut off access to the town from which most of the guests have come. What will happen if Santa can’t make it for Christmas due to the danger of the rising creek? Come home for the holidays with this heartwarming adventure that shows that the simple things make living worthwhile as Mary and Laura learn the true meaning of Christmas.

5. The Strange Undoing of Prudencia Hart by the National Theatre of Scotland at Shakespeare Theatre Company

“… there is a sense of wonder and mystery to this play reminiscent of old campfire stories, told on a dark, chilly night.” -Morgan Halvorsen, MD Theatre Guide

Synopsis: Following a hit run at the 2011 Edinburgh Festival Fringe, The Strange Undoing of Prudencia Hart is embarking on an international tour to share its dream-like journey of self discovery, magical moments, devilish encounters and wittily wild karaoke. Performed in an actual pub and inspired by the Border Ballads, The Strange Undoing of Prudencia Hart will move and amuse as the peculiar twists in the tale unfold around you. 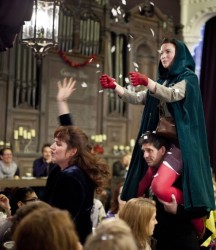