‘A Quick 5’ with Casey Kaleba 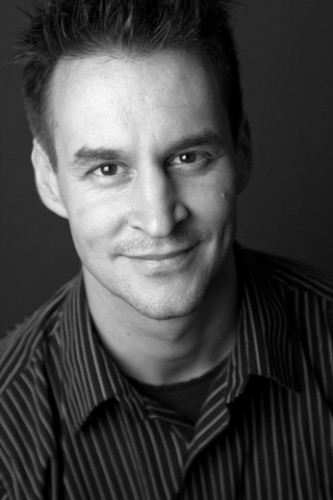 Casey Kaleba is a fight choreographer whose work can currently be seen in Young Robin Hood at Round House Theatre. Casey’s work has been keeping actors safe in music videos, and more than 300 productions with professional, community, and academic theatres. DC area credits include Folger Theatre, Signature Theatre, Washington Shakespeare Company, Forum Theatre, Hub Theatre, Source Festival, Olney Theatre, Studio Theatre 2nd Stage, and coming up Constellation Theatre Company. He is a company member with Rorschach Theatre where he has staged fights for knights, musketeers, princesses, zombies, wolves, pirates, ninjas, and at least one alien tentacle. Casey has trained with movement artists from across the globe, including Fight Directors Canada, the Society of Australian Fight Directors, British Academy of Stage and Screen Combat, Dueling Arts International, Dell’Arte, Combat Circus, Rapier Wit, and the British Academy of Dramatic Combat. Casey is a certified instructor with the Society of American Fight Directors and has taught theatrical combat workshops and courses for a wide range of programs – from elementary schools to senior citizens. He has taught at the University of Maryland, Old Dominion University,Chesapeake College, Shepherd University, Davidson College, James Madison University, Montgomery College, the Virginia Governor’s School, and Virginia Theatre Association, as well as scores of high schools, festivals, professional development workshops, libraries, and camps. He serves as an area teaching artist for the Shakespeare Theatre Company, Round House Theatre, English Speaking Union, and Folger Library. Casey has been a guest instructor for Fight Directors Canada and the Nordic Stagefight Society, and an instructor and Workshop Armourer at the Paddy Crean Workshop which is the the largest international stage combat workshop. He is a graduate of the International Stunt School, holds an MA in Theatre History, and is a Doctoral Candidate in Performance Studies. Part of the job of a fight director is to make the fights look natural and Casey’s work definitely does that. When you watch a Casey Kaleba fight it is always very realistic and creative. If you can catch Young Robin Hood at Round House Theatre before it closes this weekend you will see exactly what I am talking about.

Who did you study with for stage combat?

If I could open with an argument for physical education, my training really began with having a great outdoors to play in and having recess and gym classes.  I was never a great athlete, but I liked swinging sticks in the woods, climbing rocks and trees, and mucking about in streams.  All of that a childhood in Northern Virginia gave me, and all of those feelings of physical exploration and engagement still guide my work as an audience member, a teacher and an artist.

My formal training began under the great Brad Waller, first through summer arts programs and eventually through the Master Acting Class program at the Shakespeare Theatre.  I apprenticed under him for a decade and through him met many of my other foundational teachers, and tested under the Society of American Fight Directors.  I was very privileged to train oversees where stage combat is filtered through many other theatrical influences: the Australians bring a strong sense of street performance and clowning, Scandinavians are rooted in mask and commedia dell’arte , and the English and Canadian artists bring everything  from circus arts to fencing.

As for the actual skills, one of the things I love about the art form is that it absorbs and embraces all sorts of personalities and skills.  Whether your passion is ballroom dance, or rock climbing, or yoga, or history, or metallurgy and crafts, stage combat has a way of directly applying those interests and abilities.

Had you been working in theatre in another capacity before becoming a fight director?

I thought I was going to be an actor, but other people wanted to be actors much more than it turned out I did.  I thought I would be a director, or a dramaturg, or a stage designer, or a technician, and I spent time in all of those fields but really got hired as a fight director.   At some point it occurred to me that I could wait a few years to be cast in a show like Robin Hood or Treasure Island, where I would get to do the rope swings and leap over things and have sword fights, or I could become a professional rope swinger, stage leaper and sword slinger instead.

All of those approaches to theatre inform my work as a choreographer.  I still need to be able to speak and think through an actor’s process to collaborate with the actors; I need to talk through the whole story with the director, since I’m often collaborating with them on the climax or emotional pivot of the show; and I always have to navigate the technical challenges and opportunities of sets, lights, costumes, props, architecture, audience sight lines, and everything else that makes up the show. 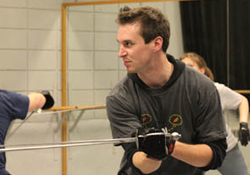 How do you make a performer feel comfortable doing stage combat if it is their first time?

In a sense it’s never their first time – everyone has walked, everyone has pointed, and everyone has knelt down to pick something up.  My job is to translate those skills the actors already have into more technical ideas like footwork, a thrust, or a duck.  For some actors that means speaking through the language of dance, for others it’s saying that something is like power lifting or tennis, for someone else it’s remembering being startled by a spider in the shower.

I try to approach the material the same way the other artists in the room do – as a form of embodied storytelling.  So what is the story of this moment, why does the character do this at this moment, instead of anything else?  If you start by asking those questions, actions become more intuitive for the performer.  I try to be driven by the actor, since they’re the one who is going to have to physically do my choreography over and over.

My own philosophy is that I’m not really a fencer, boxer, wrestler or a martial artist who is adapting their material for stage.  I don’t honestly think that’s what stage combat is.  Really at its core it’s magic – making an audience think they saw something that never really happened, and always chasing that “wow!” moment.

Do you have a general idea of what you want out of a fight going into a show or does it grow out of the rehearsals?

Years ago I worked out what I thought was a brilliant fight for a Romeo and Juliet, and brought it in to the actors.  Our Tybalt picked up his sword with his left hand and my heart just sank – until then it had never occurred to me that I’d actually be choreographing for people who weren’t my build, my flexibility, my mood, my interests, my skills.  It was a good lesson early on, and since then I tend not to build anything until I’ve had a chance to be in the room with the actors.

I do come in with a rhythm and a texture, usually.  This fight feels rhumba quick, or legato, or jagged and full of distortion, and maybe it feels like chunky peanut butter or silk.  They’re abstract ideas, but they also help me tell actors and designers where I think things are going.

Actors and directors bring things to the room, too, and I always want to leave room for their work as artists and people.  Sometimes that means they bring a back injury, or a recent surgery, or the memory of a great (or terrible) experience on another fight in another show, but it also means they bring energy and skills and ideas that I may not have thought of.

What productions do you have coming up?

This is a season of big shows: I opened Young Robin Hood at Round House Theatre and the same night started production on Zorro with Constellation Theatre.  I’m tackling Henry V at the Folger Theatre in January, and have upcoming productions of Macbeth, Rashomon, Romeo and Juliet, an adaptation of Julius Caesar at Catholic University, and a great winter teaching fights at Round House Theatre.