‘A Quick 5’ with Kimberly Gilbert

Kimberly Gilbert is completing a run of You For Me For You this weekend at Woolly Mammoth Theatre Company. She is celebrating six years as a Woolly Mammoth Company Member where in that time she has performed in Cooking with Elvis, Big Death & Little Death, Martha, Josie and the Chinese Elvis, The K of D, Measure For Pleasure, Boom, Fever/Dream, Clybourne Park, In the Next Room, A Bright New Boise and Mr. Burns: a post-electric play. Kimberly is also a company member of Taffety Punk Theatre Company where she was most recently seen in The Rape of Lucerne. Other Taffety Punk shows include Bootleg Cymbelline, Cardenio Found, The Skinhead Hamlet, Damaged Goods, Let X, and Then It Faster Rock’d. Kimberly has graced many area stages including Round House Theatre, The Kennedy Center, Folger Theatre, Source Theatre, Scena Theatre, & WSC Avant Bard. It is always a pleasure to watch Kimberly and as you will read she has lots more stuff coming up.

How did you first come to Woolly Mammoth Theatre Company?

Cooking With Elvis by Lee Hall, Season 24. This was the show I first auditioned for at Woolly. I was in a Macy’s parking lot in Springfield, Pa with my Mom when I got the call with the offer. It had been about a month since I had auditioned so I was sure I didn’t get it.  It is one of my fondest, clearest memories.

In You For Me For You your characters speak in a kind of gibberish style. Was this written in the script or did in evolve during rehearsals?

Yes and yes. Mia (playwright) scripted everything, from the hyphenation to the punctuation to the syllabic stressing. But as she watched me play with these things, she edited, amended, added. I kept on saying I could take it, keep going, keep going, more more more. So ten days before previews she gave me a whole new scene.

…Sometimes I need to shut up. J

I loved every minute of it. 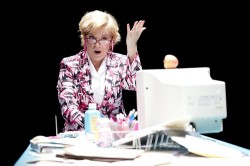 Kimberly Gilbert in ‘You For Me For You.’ Photo by Scott Suchman.

You are a member of Taffety Punk Theatre Company which like Woolly Mammoth Theatre Company performs works that are just a little off center and always push the envelope. Is it coincidence that you are involved with two theatre companies that put up this kind of theatre or is this your favorite type of show to perform?

If you look at my body of work, it primarily comprises of 16th Century playwrights or 21st Century playwrights. I have a 400 year gap in my repertoire and for the longest time I couldn’t understand why. So here’s what I have come up with. I adore working on a new script; seeing the building blocks, the structure, the topography mold and morph before my eyes, being one of the trailblazers in a brave, new world. Woolly has been my home for this and I am humbled every time they let me come play.

And, for me, when it comes to Shakespeare, you have the opportunity to rediscover, reinvent. The universe that is his canon, it is filled with innumerable dimensions to discover, and when a fresh company of actors-designers-directors get together and explore his universe they find a whole new truth, their own brand new brave new world.  The Taffety Punks seek out that brave new world any and every which way we can.

When not performing what do you like to do for relaxation?

Where can we see you next after You For Me For You closes?