‘A Quick 5’ with Nicholas Rodriguez 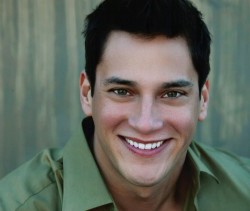 Nicholas Rodriguez is currently playing Freddy Eynsford-Hill in My Fair Lady at Arena Stage where he was last seen as Curly in Oklahoma! which won him a 2010 Helen Hayes Award,for Outstanding Lead Actor in a Musical. He has also appeared at Arena Stage as Fabrizio Nacarelli in Light in the Piazza. He was  seen on Broadway in the title role in Disney’s Tarzan. Off-Broadway Nicholas has appeared in The Toxic Avenger, Almost Heaven, Bajour and Collete Collage. National tours include Jesus Christ Superstar (Jesus), Evita (Che), and Hair (Claude). Regional credits include The Ten Commandments (Kodak Theatre), JCS (Jesus), Beauty and the Beast (Gaston), Damn Yankees (Joe), Cinderella (Prince), South Pacific (Cable), Master Class (Tony), Love, Valour, Compassion! (Ramon), and The King and I (Lun Tha). He was in the film Sex and the City 2, and is featured on the film’s soundtrack. Soap Opera fans will definitely recognize Nicholas for his portrayal of Nick Chavez on ABC’s One Life to Live for which he received a GLAAD Media Award. Nicholas is the proud Artistic Director of the Broadway Dreams Foundation. He holds a BM and MM in vocal performance from the University of Texas at Austin. I have seen Nicholas in all three shows he has performed in at Arena Stage and he never disappoints. His “On The Street Where You Live” is definitely a highlight of the production. Actually Nicholas Rodriguez is a big highlight of any production.

My first professional performing job was in a regional production of SHE LOVES ME at Live Oak Theatre in Austin, TX. I was in high school, and played Arpad. I was instantly bit by the bug. I stood in the wings every night watching the actors playing George and Amalia and wanted to follow in their footsteps. That experience changed my life, and so many of the people from that production remain dear friends and role models to this day!

My Fair Lady is your third production at Arena Stage. The other two shows were The Light in The Piazza and Oklahoma. All three times Molly Smith has been your director. What do you enjoy the most about working with Molly Smith and performing at Arena Stage?

Where to begin? Molly is an amazing collaborator, she expects nothing but the best from herself and those around her. She allows actors room to flex their muscles, and directs by asking questions that will help you find your way into a character rather than just supplying you with all the “answers.” She really believes in the educational aspect of regional theatre. It’s a place for us all to continue to grow and hone our craft. She believes in and focuses on the process more than the “bottom line.” It’s an incredibly enriching (and unfortunately not all that common) experience. In addition to being an amazing director and collaborator, she’s become a mentor and dear, dear friend. She’s extremely loyal and deeply caring. I love her very much. 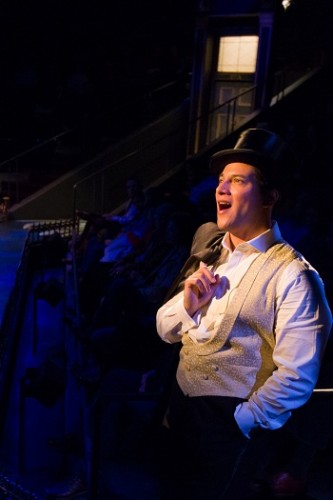 Nicholas Rodriguez as Freddy Eynsford-Hill in Arena Stage at the Mead Center for American Theater’s production of ‘My Fair Lady.’ Photo by Richard Anderson.

You performed the lead role in Tarzan on Broadway. Can you please tell us about your experience working on that show?

It was my Broadway debut, and it took many auditions to get there. It was such a fun company to be a part of, and I learned so many skills I’ll have for the rest of my life. Although it wasn’t the critical hit everybody hoped it would be, artists really pushed themselves to think outside of the box. I can’t think of a bigger adrenaline rush than running on from the wings to take the final bow in a Broadway show and realizing that all the years of training and preparation led to that moment. It was a dream come true.

A lot of people know you as Nick Chavez from the soap opera One Life to Live. Soap fans are known to be quite fanatical. What is your strangest soap fan encounter?

OLTL was truly a blessing. I was originally hired for 3 episodes, and the producers and writers kept writing me into more and more story lines. I was so proud of the stories we told. There were constantly fans at the stage door for all of the actors. I also happened to be doing an Off-Broadway musical called the Toxic Avenger at the same time, and often times, OLTL fans would show up at the theatre. I didn’t have any particularly “crazy” fan experiences, but I had a lot of rather touching ones. Nick Chavez was an openly gay political advocate, and I would get letters of thanks from all around the country from people of all ages saying “thank you” for being a role model or just simply telling me their story. I could have never imagined that being on a soap opera might inspire other people who might be struggling with their identity, or offer encouragement to a young person who might be a victim of bullying. It was/is truly humbling.

After My Fair Lady finishes its run where can we see you onstage next?

I am so excited to be going back to New York to do 4 shows at 54 Below  in January (23, 24, 30, 31). It’s a tribute show to the incredible Joni Mitchell, and it is such amazing music to work on. I’m also continuing to travel around the country doing concerts and teaching as the Artistic Director of the Broadway Dreams Foundation.