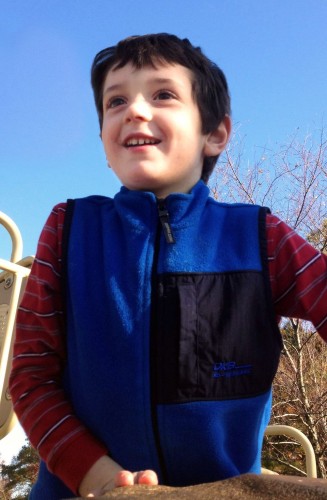 Unfortunately, the Newtown tragedy has touched Lancaster, PA’s Dutch Apple Dinner Theatre, as the young woman who played Maria (Francine) in their production of West Side Story, lost her 6 year old son Benjamin that day.

About Benjamin Wheeler, 6 (from The Associated Press)

Music surrounded Benjamin Wheeler as he grew up in a household where both his mother and father were performers. They left behind stage careers in New York City when they moved to Newtown with Benjamin and his older brother, Nate.

“We knew we wanted a piece of lawn, somewhere quiet, somewhere with good schools,” Francine Wheeler told the Newtown Bee in a profile.

Ben was spirited and energetic. He was taking swim lessons, and at soccer practice, he’d often be running across the field long after it was necessary. A recent accomplishment, his family said, was performing at a piano recital this month — and sitting still long enough to play one piece.

Francine, a music educator and singer-songwriter, used to make up songs for Ben when he was a baby. Some eventually found their way onto a CD, she told the local newspaper. Ben’s father, David, still writes and performs, according to a profile on the website of the Flagpole Radio Cafe theater.

Before school on Friday, Ben had told his mother he wanted to be an architect — but also a paleontologist.

“That’s what Nate is going to be,” he told his mom. “And I want to do everything Nate does.”

A fund as been set up in his honor, THE BEN WHEELER FUND, that was originally set up by the parents of Francine’s music students. The Dutch Apple Dinner Theatre will be collecting donations following the performances of their current production. You can also send your checks to The Benjamin Wheeler Fund c/o Newtown Savings Bank on Main Street in Newtown.

More about Benjamin Wheeler (from Obituary)

Benjamin Andrew Wheeler, 6, departed this life on Friday, December 14, 2012 at the Sandy Hook Elementary School. Benjamin was born in New York City on September 12, 2006, a son of David Cole and Francine (Lobis) Wheeler. Ben was an irrepressibly bright and spirited boy whose love of fun and excitement at the wonders of life and the world could rarely be contained. His rush to experience life was headlong, creative and immediate. He was a devoted fan of his older brother, Nate, and the two of them together filled the house with the noise of four children. He loved the local soccer program, often running across the field long after it was actually necessary, but always smiling and laughing as he moved the ball nearly always at full tilt. He was becoming a strong swimmer and loved his lessons. Eager to learn, he couldn’t wait to get to school to see his teacher and his growing group of new first grade friends. Ben was also a member of Tiger Scout Den 6 which met at the Sandy Hook Volunteer Firehouse. Earlier in December, Ben performed at his piano recital and sitting still long enough to play one piece was an accomplishment he reveled in. He loved The Beatles, lighthouses, and the number 7 train to Sunnyside, Queens. In a conversation with Francine before school on Friday, he said, “I still want to be an architect, but I also want to be a paleontologist, because that’s what Nate is going to be and I want to do everything Nate does.” He will be sadly missed by his loving parents, David and Francine Wheeler; his brother Nate; his grandparents Carmen and Annette Lobis of Garnet Valley, PA, Ellsworth and Kay Wheeler of Charleston, SC, and Harry Berquist of Newport News, VA; great grandmother Sophia Turchi of Broomall, PA; Aunts and Uncles Michael and Sheila Lobis of PA, Anthony and Colleen Lobis of PA, Steven and Ann Lobis of PA, Jeffrey and Dawn Wheeler of WA, and Andrew and Jamie Wheeler of HI; great aunts and uncles James and Nancy Cole of VA, Robert Lobis of CO, Michael Lobis of PA, and Marianne Stewart of PA, Marie Turchi of PA;and numerous cousins and friends. He was predeceased by grandmother Ann Cole Berquist. It is suggested that contributions in Benjamin’s memory be made to the Benjamin Wheeler Fund. The family will receive visitors at the Trinity Episcopal Church, 36 Main St., Newtown on Wednesday, December 19th from 4:00 – 8:00 PM. The funeral will be held at the church on Thursday, December 20th at 11:00 AM. Burial will be private. The B.C. Bailey Funeral Home of Wallingford has been entrusted with the arrangements.