Theater Review: ‘You Can’t Get a Decent Margarita at the North Pole’ at Grain of Sand Theatre 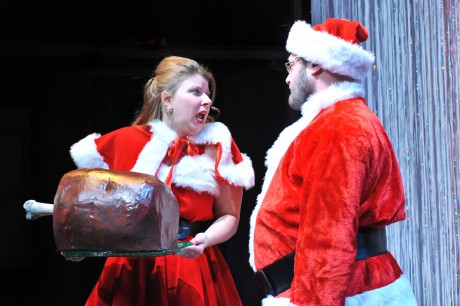 We all know how stressful holiday time is, but it appears that even the inhabitants of the North Pole are not even immune from it. Santa is over worked, Mrs. Claus can’t take any more of his sixteen hour days, Rudolph is looking to unionize the reindeer, and Santa has a very overzealous office manager. Put this all together and you have a very funny and entertaining play called, You Can’t get a Decent Margarita at the North Pole, which is presented by one of my favorite Capital Fringe theatre companies called Grain of Sand Theatre. This is their first attempt at a comedy, and they have come through with flying colors.

Hold on to your antlers and enjoy.

Director Sara Bickler has staged Matt Hanf’s script at a good clip and, with this being her first big production as a director, I suspect we will be seeing much more of her work soon. I hope so because comedy is very hard to stage, and this script could have been ghastly in the hands of someone less talented. 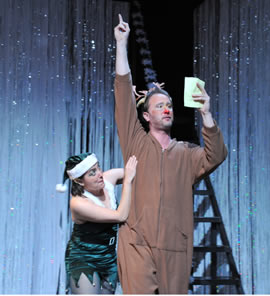 The basic plot as stated previously concerns Santa Claus (Carl Brandt Long) who is over worked and is never home. His really overzealous office manager named Rita (Christine Lange) is well intentioned but tries way too hard to impress. This is all too evident when Mrs. Claus (Heather Whipan) whose real name is Marjorie (who knew) is trying to have some intimate time with Santa. Rita keeps calling the home phone and Santa’s cell to discuss with Santa the possible choking hazard of toggle switches on certain toys.

While all of this is going on, Rudolph (John Stange) is trying to unionize the reindeer while favoring the audience with Shakespeare like monologues. I must say to see John Stange in a reindeer costume is one of the more hysterical things I have seen all year and, because he is so talented, the character as written totally works. Stange primarily plays dramatic roles so to see him in a comedy was a nice change.

Christine Lange is very very good as Rita and has all of the energy that the character requires. She even gets to favor us with a few Christmas songs. 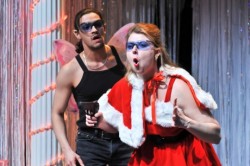 As Santa, Carl Brandt Long does our holiday hero real justice with good comic timing, great chemistry with the rest of the cast, and nifty guitar and ukulele skills.

Heather Whitpan’s Marjorie, while angry and manic, is never too much for the audience to handle. This character could have been way over the top but Whitpan’s emotions are contained until they have to be a little more hysterical. I guess with a office manager like Rita, it’s hard to contain yourself sometimes.

If there is anything off with this show, it is the gangster like character of the Tooth Fairy (Ryan Sellers). There is a subplot about him being Mrs. Claus’s gun instructor and whether or not Mrs. Claus will leave Santa to be with him. I wonder if this plot point is needed. Ryan Sellers plays the character well, (although I did have a little trouble understanding him in spots) but you have to ask what Hanf was going for with this story line.

All in all, I recommend for some slightly twisted holiday cheer, you check out You Can’t Get a Decent Margarita at the North Pole. It has a good cast, solid direction, and a talented playwright attached to it. As of now Grain of Sand Theatre Company is three for three with me which is a rarity for such a small theatre company. Hold on to your antlers and enjoy.

You Can’t Get a Decent Margarita at the North Pole plays at The Shop at Fort Fringe which is located at 607 NY Avenue, NW, in Washington, DC. Tickets can be purchased online.