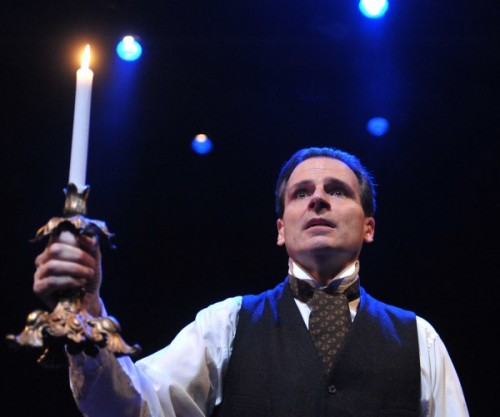 Paul Morella in ‘A Christmas Carol.’ Photo by Stan Barouh.

Paul Morella’s one-man adaptation of A Christmas Carol is a timely feat of storytelling; a marriage of Dickens’ original text and modern theatrical magic, the show invites the audience into a whirlwind of ghosts, greed, and personal redemption.

As Morella plays the narrator and all of the characters—essentially speaking the text as it appears in the novella—the audience can enjoy Dickens’ disarmingly precise descriptions of Victorian London and its inhabitants. Often omitted in performance, the clever voice of the narrator forms the backbone of this production.

…of all the events produced this holiday season, this production may be one of the very best.

Still, Morella’s characterizations demonstrate great range—from Tiny Tim’s adorable proclamations to Scrooge’s horrifying premonition of death and posthumous disrespect—and prove relentlessly entertaining over the course of the evening. He succeeds in distinguishing countless individuals (albeit with the use of some transatlantic accents) and paints a vivid picture in the minds of his audience; the Christmas dinner scene at the Cratchit’s house is particularly moving, as Morella enacts Dickens’ ode to the pleasures of honest simplicity. He also finds the humor embedded in the text, especially in contrasting Scrooge’s malicious Christmas Eve interactions with his reformed self the following day. 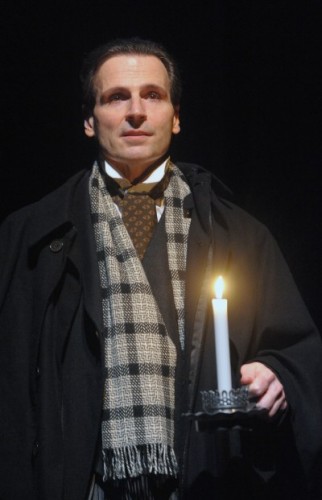 Paul Morella in ‘A Christmas Carol.’ Photo by Stan Barouh.

Olney Theatre’s intimate black box space is the perfect venue for this project—now in its third year. Morella works his way masterly around the space, even venturing out into the audience itself. The spare set—a chair, a desk, piles of books strewn across the stage—lends itself to countless situations, while the costume pieces economically conjure the phases of Scrooge’s transformation. The lighting design (Sonya Dowhaluk) occasionally fails to show Morella’s eyes, but comes hurtling back with several epic shifts—courtesy of the hidden footlights at the edge of the stage. Audiences should note that fog is used profusely throughout the show, though not without cause.

Despite its very traditional take on Dickens’ classic text, A Christmas Carol feels incredibly fresh, and of all the events produced this holiday season, this production may be one of the very best.

A Christmas Carol: A Ghost Story of Christmas plays at the Theatre Center, Maryland Route 108, Olney-Sandy Spring Road) in Olney, Maryland, and runs through December 30th. Tickets are available at click here.