Theatre Review: ‘A Christmas Carol’ at Colonial Players of Annapolis 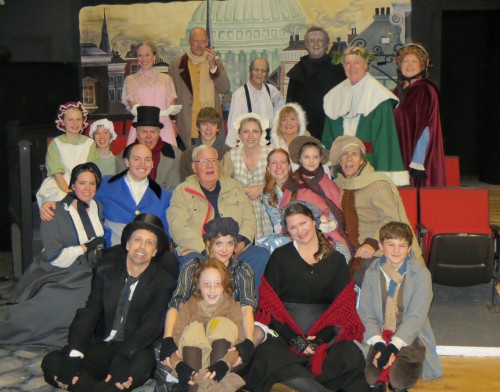 On Sunday, December 9, the cast and crew had the pleasure of performing for the one and only Dick Gessner, the composer of ‘A Christmas Carol.’ Photo courtesy of the Colonial Players of Annapolis.

You know the story. It’s Christmas Eve, and Ebenezer Scrooge dons his nightcap and bah-humbugs his way into bed, the same thing he does every year. Much to Scrooge’s surprise, four ghosts come a-calling, and teach the old grouch the real meaning of Christmas. While you can certainly argue that Dickens wrote A Christmas Carol as a scathing indictment of 19th century industrialism and capitalistic greed (and so on and so forth), the story is a classic of Christmas culture for a more simple reason. It is a story about embracing tradition, and the Colonial Players of Annapolis’ original musical adaptation (play and lyrics by Richard Wade, music by Dick Gessner) delivers exactly that.

Colonial Players’ A Christmas Carol is the theatrical equivalent of a Hallmark Channel movie— no grand philosophical statements, just a familiar story that transports the audience from the hustle and bustle of modern life to a world of nostalgia. You may feel claustrophobic in the small lobby before the show, but once you enter the theater, you are welcomed in with warm lights and paintings of a 19th century London skyline.

The production rekindles Christmas spirit, even in the most curmudgeonly of Scrooges.

A Christmas Carol takes a less-is-more approach to the material, using carol-style musical interludes and a simple design concept to suggest an atmosphere that is more idyllic than realistic. The actors never sing loud enough to blow the roof off the place, but harmonize with each other with the understated elegance of an intimate church choir. Highlights of Richard Wade’s lyrics and Dick Gessner’s score include “Mind Your Own Business,” which features Scrooge scuffling through the streets of London barking at people to leave him alone (echoing a sentiment that I and a few audience members shared while trying to avoid getting stepped on in the aforementioned lobby). “Keeping Christmas” will have you tapping your toes, although tune sounds a bit like “We Need A Little Christmas” from the musical Mame.

Duncan Hood, who plays a particularly lithe Scrooge, leads a strong cast of actors. Hood transforms Scrooge from a scuffling old man to a jolly chap bounding across the stage like a Muppet drunk on eggnog. Notable performances from the ensemble include Lesley Miller’s sarcastic Mrs. Cratchit, who delivers the biggest laugh of the show. Doug Dillner plays Mr. Fezziwig with all the silliness and jollity that a name like Fezziwig implies. 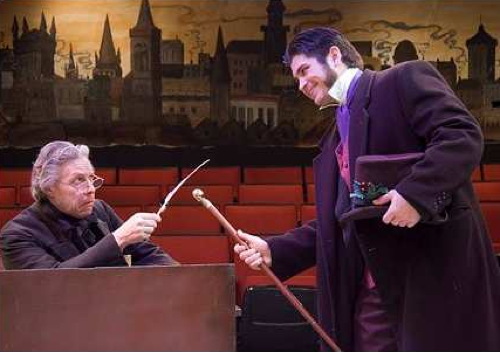 The production shines in the group scenes, staged with clarity of focus by director Jill Sharpe Compton. It’s refreshing to see a play where the supporting actors aren’t pretending to talk among themselves when they aren’t the center of attention. The play is constantly changing from time to time and from place to place, and the scene transitions are quick and efficient. An imaginative sound design by Wes Bedsworth provides ghostly voices in the darkness of the transitions. So often, voice-overs in sound design function more as cop-outs rather true theatrical effects, but this is not the case in A Christmas Carol.

The play is fast-paced, for the most part, but drags through moments of exposition. The pace dwindles during “In Your World,” sung by Scrooge’s old flame, Belle, played by Kaelynn Miller. Belle admonishes Scrooge for focusing solely on his work, rather than on her. Miller plays the scene sickly-sweet and patronizing to a point where you’re almost glad it doesn’t work out between Belle and Scrooge.

The costume design lacks the same attention to detail as the other design elements. You expect more from a well-acted, well-directed production than stock costumes with mismatched seams and wrinkled polyester. The Christmas ghosts provide a fantastic opportunity for theatrical magic, but are short on imagination. Marley’s appearance is drab, even for a corpse. The Ghost of Christmas Past is more schoolteacher than specter, dressed in a white robe and what looks like a feather boa purchased last minute from a craft store. The Ghost of Christmas Past is a confusing mix of Santa Claus and Socrates, dressed in a red robe and wearing decidedly un-holly-jolly laurels around his head. I hoped for better things from my favorite character, the Ghost of Christmas Yet-to-Come, but he was so obviously an actor wearing an oversized black robe that there was no possibility of imagining the elegant and terrifying personification of Death.

A Christmas Carol has become an Annapolis tradition since its opening at the Colonial Players in 1981, which comes as no surprise. Walking out into the cobbled streets of downtown Annapolis after an evening of old London nostalgia allows the theatrical illusion to trickle into real life. The production rekindles Christmas spirit, even in the most curmudgeonly of Scrooges.

Advisory: The 2012 run of A Christmas Carol is sold out, so be prepared to wait for standby tickets, or purchase tickets early for next year’s run.