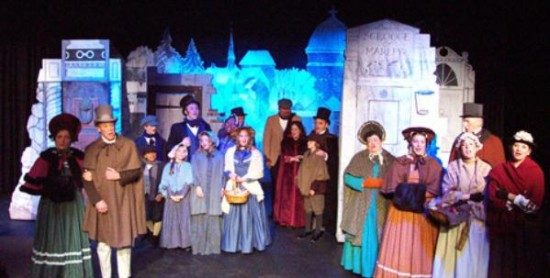 The cast of ‘A Christmas Carol.’ Photo courtesy of Musical Artists Theatre.

Musical Artists Theatre’s production of A Christmas Carol spreads Christmas cheer in abundance, but does not breathe new life into the story of Scrooge and his ghosts. Patrons looking for faithfulness to Dickens’ original work will not be disappointed, but patrons looking for a new spin on the old tale will find this adaptation lacking.

Ifetayo Kitwala delivers her lines as Martha Cratchit with a presence that lights up the stage.

That being said, one moment of the show has the potential for theatrical magic. The appearance of Marley’s ghost makes use of some innovative, backyard puppet-style theatrical tricks, and the production veers in the direction of a quirky, campy genre piece. Marley’s song “Link By Link” features a chorus of Marley wailing like a sea creature about his woes while wraith-like skeletons dance around a cowering Scrooge. (The scene elicited a laugh from me, and I almost never laugh audibly in the theater. But then again, I do have a fondness for dancing skeletons.)

Ifetayo Kitwala delivers her lines as Martha Cratchit with a presence that lights up the stage. Greg Coale, who plays Marley’s ghost, unfolds his comedic scene with boundless energy and a straight face. Jim Clelland doesn’t play the most nuanced of Scrooges, but his brooding, resonant speaking voice provides a welcome foil to the cheeriness of the other Londoners. 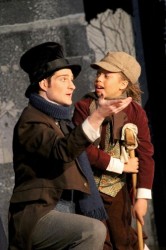 The show experiences some wrinkles due to of the faithfulness of the adaptation. Writer/director/set designer Michael Hulett takes on the challenging task of translating Dickens’ verbosity for the stage, and the pacing of the production suffers. The dialogue is long-winded and sounds unnatural in the mouths of actors struggling with English accents. A trio of women provides extraneous narration during the scene transitions. Patrons who have read or seen A Christmas Carol before need no introduction to the story, and those who are watching the story unfold for the first time are able to follow along without the help of the three storytellers. The narration technique works well on the page, but is not very engaging on the stage.

The musical orchestration is in the style of Victorian-era carols. The melodies belong to Dickens’ world, but the instruments sound unauthentic, possibly recorded from an old electronic keyboard. The lyrics are repetitive, and do not make clever use of Dickens’ famous wordplay. Hulett’s songs are not structured in a way that allows characters to grow or change. The songs establish messages too early, and characters are stuck repeating themselves for several verses. This flaw is most evident in the song “It All Comes ‘Round,” where the characters spend every verse dancing around in circles until even the actors have grown weary.

The visual design elements lack polish. Lights that illuminate some actors leave others stranded in shadow. The Christmas ghosts escort Scrooge through time while colored lights flash on and off, a technique used to exhaustion in the theatre.

Scenic artist Hal Gomer’s set painting, however, is artfully done. His smoky paintings of doorframes and the snowy London background are reminiscent of Edward Gorey’s design for the opening of PBS’ Mystery series.Michael Hulett’s dedication to Dickens’ original style is an ambitious choice, but the results are not theatrically captivating. However, the production was successful in bringing a community together for family-friendly, affordable entertainment.

Musical Artists Theatre’s production of A Christmas Carol runs through December 16, 2012 at Riverside Stage, 1530 Battery Avenue, Baltimore MD. Tickets are free, but reservations are encouraged and can be made by calling 410-837-0971, or click here.