Theatre Review: ‘A Commedia Christmas Carol’ by Faction of Fools at Gallaudet University 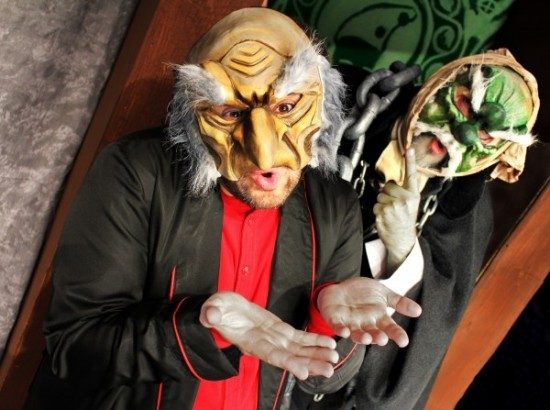 ‘Tis the season to be Scrooge! As the Catholic Church discovered when at the end of the Dark Ages it used theatre to teach the Gospels, people prefer villains. Being good and loving Jesus might be one’s ticket to heaven, but for a solid night of entertainment give us Mr. Bad! And the villain of December is none other than that loveable Scrooge, that Job Creator and Wealth Generator, who has forgotten the meaning of charity and who now has bad dreams.

Faction’s lively ‘Carol’ will entertain the “cheery” in us all…

Donning masks and their favorite two-step, the Faction of Fools Theatre Company has taken on the holiday classic.  A Commedia Christmas Carol combines an array of delightfully portrayed characters, an inventive set, plenty of clever dialogue and Punch and Judy antics, and a bit of audience interaction, which included some dodge ball.  Faction’s lively Carol will entertain the “cheery” in us all from beginning to end—minus one brief and unfortunate interlude with what appears to be Washington theatre’s favorite third wheel, video. 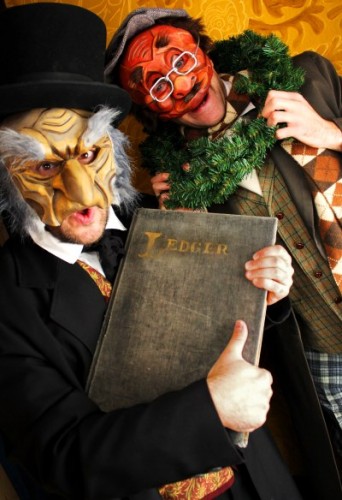 Almost everyone knows the story. Pantalone (Scrooge played by Paul Reisman) thinks the season is full of humbug. Not even family, his Nephew Innamorato (Fred played by Tyler Herman), can pull him away from his obsession with work.  He’d much prefer counting his money and denying benefits to his employee, even though he eventually relents and gives Arlecchino (Bob Cratchit played by Joel David Santner) Christmas day off (If only Walmart and Target had a Scrooge who gave their Arlecchinos Thanksgiving Day off last week.).  Christmas Eve, however, Pantalone is visited by the ghost of his former business partner, Dottore (Jacob Marley played by Toby Mulford). The ghost foreshadows three new ghosts each with its own dream: the ghosts of Christmas Past, Present, and Future.

Paul Reisman’s Scrooge is delightfully grouchy. In fact, Oscar the Grouch, the master of all ornery old bastards, would have a hard time keeping up with this Scrooge. Reisman razzes, zaps, and zings a whole stage-full of blustery good fun.  He also knows how to play with an audience, willingly bantering with the best of them.

This Carol’s supporting cast does a superb job as well. Santner’s Cratchit plays Arlecchino’s physical comedy with precision. He could make a brick upside the head a hoot. Herman’s Fred, one of the few non-masked characters, might as well have worn a mask, as his persistently upbeat, “I love Christmas” attitude could not have been more deliciously sappy.

Bob Cratchit’s family also knocks the comedy over the risers. Without a Christmas dinner, his Arlecchina (Mrs. Cratchit played by Julie Garner) led the family on an hilarious hunt for an out of season insect to brine and bake, with Tiny Tim, played by Michael Sprouse, finally spearing the honors.

The production’s scenography is also excellent. The set design by Ethan Sinnott marvelously conflates the Town Square with the living room, offering a whimsical vision of folk art in the guise of high aesthetics. The costume designs of Denise Umland provide plenty of comic pizzazz to the spectacle, as does the sound and music designed and composed by Thomas Sowers and Jesse Terrill, respectively.  And, of course, the masks, designed by Tara Cariaso and Aaron Elson of Waxing Moon Masks, are eye riveting, particularly the Tiny Tim / young Scrooge mask that beseeches the entire audience whenever it takes the stage.

When this faction of fools sticks to its Commedia focus, it achieves a splendid result. When it ventures into video, however, the results are not so pleasant. Now I applaud a bit of risk taking, even in holiday fare. And the Ghost of Christmas Yet to Come, as in all prophetic undertakings, is the place to take a risk if one is so inclined. In this case, however, the risk is not worth the gamble. Director, adapter, and co-choreographer Matthew R. Wilson elected to transform this pivotal dream into a video nightmare. The problem with such an approach, however, is that the Commedia del’Arte style is where the genius of the actor carries the day. Video is not an actor’s medium, as it buffers the actor’s presence from his or her audience. Although the show’s video, designed by Joel David Santner, is technically proficient, it throws this Carol into another theatrical universe for several minutes. It’s as if someone suddenly stole A Commedia Christmas Carol and stuffed a Video Christmas Carol into our stocking.  As a result, we are left wondering “who Grinched our Carol?”

Fortunately, this nightmare into theatre’s potential future doesn’t last long, and the audience–and the show–wakes up in time for Christmas, returning us to the land of Pantalone and a human-sized chicken, played tenderly by Jessica Willoughby. When Mrs. Cratchit whips out her hatchet and starts chasing that bird around the stage, we can once again imagine a world where we get to have our chicken and eat it too.

Running Time: a fast paced 90 minutes with no intermission.