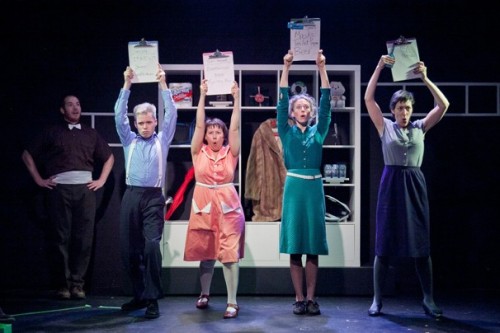 Theatre is very seldom an interactive process. The experience of an audience member generally is as follows: one walks into the theatre, sits down, and watches—the process is voyeuristic, certainly, but not participatory. Dog & pony dc is turning this notion on its head with A Killing Game, their new “audience integrated” show now playing at the Capitol Hill Arts Workshop.

… hilarious and occasionally moving, but ultimately fun, as good theatre should be.

You—that is, the audience member—are suddenly a citizen of a city undergoing a serious health crisis in the form of a plague that causes various citizens to collapse and die around you. Each scene contains a role delineated for each audience member, whether as a coroner, a servant cordoning off seats with green duct tape, or a member of a team in competition for various items in a survival kit. The notion of participation can be bewildering to some viewers, but many took to it with gusto, cheerfully distributing hand sanitizers among the aisles, offering suggestions for diagnostics, and singing along to “Ode to Joy” in German (brush up on the lyrics, as that particular sing-along can be otherwise difficult to follow). 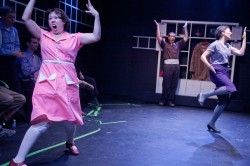 The first scene is a cheerful musical rendition of ELO’s “Mr. Blue Sky” by A Killing Game’s performers—Jon Reynolds (Blue), Yasmin Tuazon (Pink), J. Argyl Plath (Orange), Jessica Lefkow (Purple), Genna Davidson (Green), and Sean Paul Ellis (Brown). In this opening scene, Mr. Orange is caring for his two infants in a carriage, while Misses Purple and Green (a nun) sit in the shade. Blue and Pink are having a picnic, while Brown looks for a particular address as a delivery man. Then everyone begins to die—as if Pleasantville has suddenly been transported into the world of Stephen King’s The Stand.

I missed out on a large portion of the second scene owing to my lack of a smartphone, but the audio overhead made it clear that it was a commentary on the way we experience disaster in a modern world. We are not as far off from Orson Welles’ 1938 War of the Worlds broadcast (on which this was partly based), than we might think. Audience members were treated to live tweets from characters and were encouraged to interact and engage with them over Twitter, revealing yet another level of interaction. In a world where people in New York knew about the 2011 earthquake moments before it happened due to social media, this was a very clever and useful inclusion. I definitely recommend bringing a smart phone of some kind, as I felt I was missing something without one. 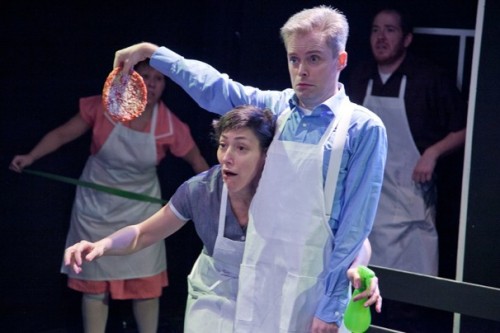 Audience members were asked to provide potential diagnostics (appearance, behavior, sound and smell) for the crisis, and participated with good humor. One member offered the clue that “all four victims were wearing pants” and when asked to elaborate, added that they were being worn on their legs. Tuazon, in the role of Dr. Helen Schmidt (grief counselor), led a round of “Ode to Joy” and ordered the grief-stricken citizens of the city (i.e., the audience) to do The Wave. We were then “redistricted” and forced to move seats into separate teams for “A Killing Game,” the game show where teams compete for their survival. Plath, as health inspector, served as the host, while Ellis played an overly enthusiastic Vanna White to his Pat Sajak. The other performers served as team leaders—my own, Jessica Lefkow, led us in chanting the Barney song as the purple team.

This is an incredibly entertaining show, much better and more fulfilling than a game of Clue. The actors are forced to reinvent themselves with every scene change, and do so admirably, improvising with the audience and each other without a hitch. Instead of seeing yet another rendition of A Christmas Carol this holiday season, why not see something active, engaging, and innovative? A Killing Game is all those things and more, hilarious and occasionally moving, but ultimately fun, as good theatre should be.

Run Time: 1 hour and 20 minutes with no intermission.

A Killing Game is playing at the Capitol Hill Arts Workshop, 545 7th SE in Washington, DC through December 22. Tickets can be purchased online.