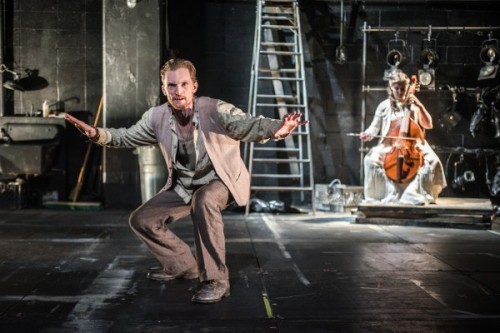 Now, that the Christmas/Holiday season is over, it is time to return to the true meaning of existence—War. In An Iliad at Studio Theatre, a wandering itinerant Homer stumbles into the P Street theatre and reluctantly performs the tale of two great heroes: Achilles and Hector who, though ancient in garb, nevertheless continue to embody the ferocious appetite we mortals have for extermination. Although playwrights Lisa Peterson and Denis O’Hare attempt to inject a bit of humor into the show during the first 30 minutes, it is during the last 60 minutes of Scott Parkinson’s intense monologue that the fatalistic beauty of Homer’s Iliad shines most harshly. In that harsh, unapologetic glare An Iliad succeeds, not so much as an anti-war treatise but as a gem of defiant reportage on what war actually is.

With Landell providing a host of excellent musical effects, Parkinson and An Iliad soar.

Scott Parkinson plays the roaming Homer who has witnessed too much of the carnage of war to ever relish its telling. Parkinson handles the pathos of Homer’s language with wonderful dexterity, mesmerizing the audience with its beauty and terrifying them with its implications. He embodies the various characters vividly. 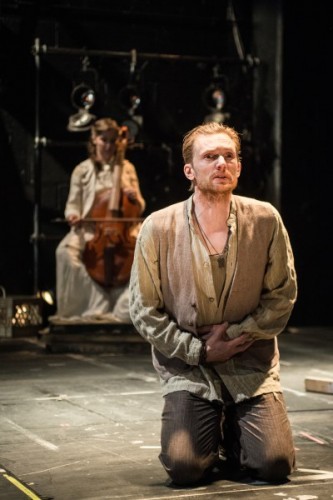 The Trojan War has raged for nine long years. Agamemnon, leader of the Greeks, has taken the priestess of Apollo as his concubine. The god Apollo is none too pleased and forces Agamemnon to surrender his prize. Arrogantly, he takes the woman whom Achilles, one of the greatest of Greek warriors, has taken for himself. Angered Achilles orders his men to stop fighting for the Greeks. He retreats to his tent to brood.

Meanwhile, Hector, the great Trojan warrior, is leading his forces against the Greeks with devastating results. The fate of the war hangs in the balance and will be determined not by weaponry and bravery, but by the fragile human egos that wrestle with their own mortality.

It is this humanity in the face of ultimate horror that makes Homer’s Iliad such an incredible literary accomplishment. To be sure, the text is beautifully written, with this translation by Robert Fagles; but the force of these heroes’ characters lies not in some Rambo-like personality nor in some strange Apocalypse Now Kurtz psychosis, but in Achilles and Hector’s horrible humanness in the face of great grief and loss. As the narrative unfolds, Parkinson embodies that humanness with penetrating effect.

When the piece allows Parkinson to stay within the confines of his Homeresque persona, it works marvelously; when An Iliad pushes Parkinson into the more contemporary parlance of modern America, however, it veers into mundanity. Perhaps, Peterson and O’Hare injected the contemporary analogies into the tale because they thought average American theatre-goers needed a bridge between the pettiness of their own lives and the real horrors of war. Or perhaps they thought that Homer was too old school to work in our narcissistic “me” oriented culture. In any event, their addition of flippant banter into the tale only trivializes the subject Homer examines. 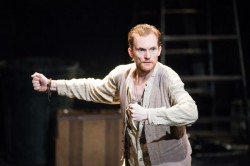 Fortunately, these tangents occur predominantly during the first part of the show before the arrival of cellist Rebecca Landell. That’s when Peterson and O’Hare for the most part stop playwriting and let Homer take over. With Landell providing a host of excellent musical effects, Parkinson and An Iliad soar.

David Muse directed the show, handling the pacing with a craftman’s touch. One could argue that he should have found a less frivolous way of handling the script’s more pedestrian passages: at least a way to allow the war poet Homer to remain war-torn. Such is the challenge of tackling a classic by a muse and singer for the ages.

Muse’s production team included Luciana Stecconi (scenic design), Collin K. Bills (lighting design), Laree Lentz (costume design), and Eric Shimelonis (sound design and composition). The scenography was simple but effective, particularly the lighting and the music. Staying within the concept of an unpretentious theatrical backstage with work lights, Bills kept the audience focused on the action, shifting our gaze subtly with light, while the musical design enhanced the story throughout without drawing attention to itself.

An Iliad might not be your first choice for the New Year. After all, it is a play designed to remind us all of the ravages of war, and not just those wars perpetrated by others in distant lands in times long ago, but by ourselves in the here and now, by our Achilleses against their Hectors. Considering recent events, which look and sound like war even though not named as such, An Iliad is most definitely a timely piece, entertaining not for its comic wit but for its penetrating glimpse into the affairs of men’s hearts, their ego and will to power. If such a show as this helps keep us focused on lessening our temptations to violence as a solution to our ills, then all of us should hasten to Studio to witness its call for a cure.