Theatre Review: ‘Apples from the Desert’ at Theater J 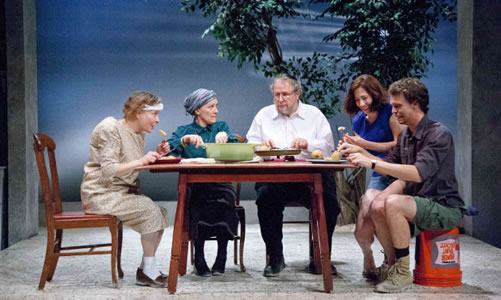 Act I of Savyon Liebrecht’s Apples from the Desert at Theater J ends with a dramatic escape. The eighteen-year-old daughter of a devout Orthodox Sephardic Jewish family living in Jerusalem flees the rigid patriarchal familial structures and her father’s more than traditional limitations on pleasure and joy. During the intermission, we know that the daughter’s act of betrayal—no matter how justified (her father was about to marry her off to a 40-year-old neighbor with three children)—will leave her family mortified in the eyes of the Sephardic community. The only question in anyone’s mind is: to what lengths will the father now go to make his family whole again?

Unfortunately, not nearly far enough for this viewer, as his own witness to familial cultural and generational fireworks have lit the sky with far more firepower. As the second act neatly resolves all the seemingly irreconcilable conflicts ignited in act one, we realize that what began as a tense reality-based play set in the mountains of Jerusalem wants to end as a fantasy-based play set in a desert on a socialist kibbutz six hours away by bus. In this play, however, this shift seems intentional. On this desert commune, apple trees really do bring forth the sweetest apples and patriarchies really do end not with a bang but a whimper.

As far as fantasies go, it is a fantasy worth having: a world where the male heads of household and of States go quietly without excruciating violence. The problem for me lies not in the desire but in the expectations set forth during act one and, then, the speed with which those complex psychological family issues are resolved and forgotten in act two without even a shadow of anxiety or remorse. But then, maybe socialist kibbutzim really are the solution to all our many problems.

Liebrecht’s Apples from the Desert was first published as a short story in 1986, at the beginning of Liebrecht’s career as a writer. Liebrecht only recently adapted the story to the stage, electing to keep the story’s original time period. The absence of modern iconography serves the production well in that it gives the production an historical sensibility. Within that historicism we can better understand the conflict between modernity and its ahistorical posture and an ancient tradition such as the Sephardic.

…a fantasy worth having

Johanna Gruenhut directed Theater J’s production of Apples from the Desert. She deals with the play’s stylistic changes by keeping the play focused on authenticity and the actors on understating the tension. While the authenticity is welcomed, the understatement frequently leaves credulity at the door, as in what happens to a dream deferred? It explodes.

The cast is led by Jennifer Mendenhall playing the part of Victoria, the mother of the 18-year old Rivka, played by Blair Bowers. Mendenhall’s Victoria is a strong somber presence, even if a silent one in her encounters with her husband, family patriarch Reuven, played by Michael Tolaydo. When she finally confronts him in the sands of the desert, we only wonder why it took her so long. Tolaydo gives the play’s nemesis a calm authority, a man who is used to fulfilling his responsibilities as a husband and father and who, in return, is used to having his decisions followed—without back talk or question.

Sarah Marshall plays a different Sarah, Victoria’s mischievous unmarried sister. Marshall gives the older woman a delightful yet reserved persona that counters the gloomy atmosphere. Her subtle acts of rebellion not only amuse the audience but offer us a possible source of inspiration for Rivka’s more full-throated challenge to patriarchal domination. 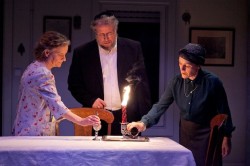 Ms. Bowers has the greatest challenge in portraying Rivka. In her initial scene with the young man Dooby, played by Brandon McCoy, she captures Rivka’s naiveté: her shyness being very endearing. As the first act progresses, however, we come to understand the complex web of lies she has woven around her parents as she prepares to leave them. Her demonstration of such sophistication and worldliness belie those initial impressions of simplicity. When she and Dooby transplant themselves into the desert in act two, her sophistication and worldliness only grow deeper.

McCoy’s Dooby—seen only in quick snapshots during act one—blossoms like an apple bloom in act two: he is the epitome of all level-headed, kind and loving, self-assured and articulate organic farmers. McCoy handles this idealized character with simple authenticity, which is a blessing.

Theater J’s scenography for Apple from the Desert is first rate. Timothy R. Mackabee’s sets and costumes lend a great deal to the play’s authenticity. His set is particularly splendid as the dining area serves both the Jerusalem and desert settings and, thus, operates as a kind of bridge between the otherwise disparate worlds and styles. Dan Covey’s lighting enhances the rapidly shifting tone of the play, as does the sound design by Elisheba Ittoop.

As mentioned earlier, the fantasy offered up by Apples from the Desert is most definitely a fantasy worth having. Although an Israeli play in its specifics, dealing with an issue of growing importance to Israeli society, at a more general level the play’s central focus lies at the root of a great deal of conflicts world-wide. Patriarchy, be it dressed as a Sephardic Jew or a fundamentalist Christian or a Wahhabi Muslim, is looking for ways to preserve its control over discourse and power. I only wish that playwright Savyon Liebrecht and this production would have provided a better psychological ground upon which an audience might suspend its disbelief.

Running Time: one hour and 50 minutes with a 15 minute intermission.