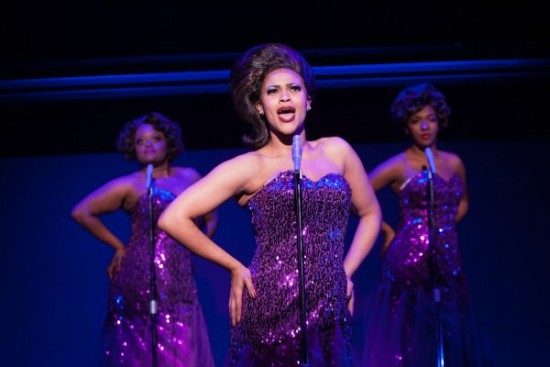 So here I am with a big predicament. I have just seen a show at a theatre that I highly respect. The production at least for me is way under what the house is capable of achieving. Add to that a leading lady that everyone is gaga over–and I don’t understand why. Put this all together and you have in a nutshell how I feel about Signature Theatre’s production of Dreamgirls. My predicament is how do I explain all of this without making me sound really nasty.

Let me start off by saying that Dreamgirls has never been one of my favorite musicals. I always thought that composer Henry Krieger’s score for Side Show was infinitely better and always gets eclipsed by Dreamgirls.  Having said that, I went in with a totally open mind to Signature’s production because a few years back Signature actually fixed another musical that I am not fond of called Chess.  So I said, “If any theatre can make me like Dreamgirls, it would be Signature.”  Then also I figured with Matthew Gardiner directing and co-choreographing with Brianne Camp, the show would have a good chance. It pains me to say that this did not happen. What I got from this production of Dreamgirls were characters that I did not care about and a way over amped sound mix, which is surprising for a Matthew Rowe design because he usually designs shows with just the right nuances.

In Dreamgirls, however, there are no nuances.  So the audience ends up with a show that lives up to its “other” reputation as a “screechfest” with its nickname “Screamgirls.”

For those who don’t know the book by Tom Eyen (who also wrote the lyrics), the story is loosely based on the trials and tribulations that happened to Diana Ross and “The Supremes” during the heyday of Motown. Effie White (Nova Y. Payton) is replaced by another singer in her group the “Dreams” and after many hardships goes on to have a successful solo career. The subplots include issues of race, payola, and how ruthless some of the record producers were at that time. The main problem with Eyen’s book is you know where it is going from the time Curtis Taylor Jr.(Sydney James Harcourt) a sleazy promoter approaches Effie, Deena Jones (Shayla Simmons) and Lorrell Robinson (Crystal Joy) backstage at the Apollo during a talent competition. My other problem with the book is that some of the characters (Curtis in particular) are so undesirable it is hard to care about anyone succeeding.

The matching “Dreams” gowns in particular are sumptuous and really catch the era and the look of Motown.

Again, no one is more surprised than I am at the way this show turned out. While the choreography does have a lot of energy with its slick moves that singing groups of the Motown era had, some of the direction feels rushed and some of the dramatic moments are not as dramatic as they need to be. The scene between Effie and Deena toward the end of the show is just one example of the lack of emotional intensity in this production.

I was always taught to try and find something nice in every show so here are my two pluses. Number one: Frank Labovitz’s costumes are stunning. The matching “Dreams” gowns in particular are sumptuous and really catch the era and the look of Motown. Second: The ten piece band under the direction of Darius Smith plays Harold Wheeler’s orchestrations with all the soul of the period. The orchestration actually makes the score sound better than it is. Kudos to Gabriel Mangiante for reducing the original charts without losing any of Harold Wheeler’s original voicings. 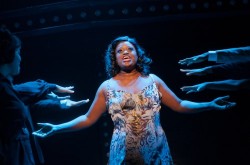 I now come to the issue of the lead actress Nova Y. Payton.  While she has a big voice that is good for this kind of music, it lacks emotional flexibility and all subtlety as well. The same can be said in my opinion for her acting. While Effie is a miserable character, I would like to have seen some reason to root for her. I did not get this from Nova Y. Payton. In fact what I got was a whiny kid who thinks she is better than anyone else.

For me to write this about a theatre that I highly respect and who produces some of the best musicals in the DC area, it really does not feel good to write a review like this. I understand why you would choose to produce it, but if you are going to do so there has to be something or someone that you can care about. Surprisingly, at least for me this production has neither.

Running Time: Two hours and 30 minutes with one intermission