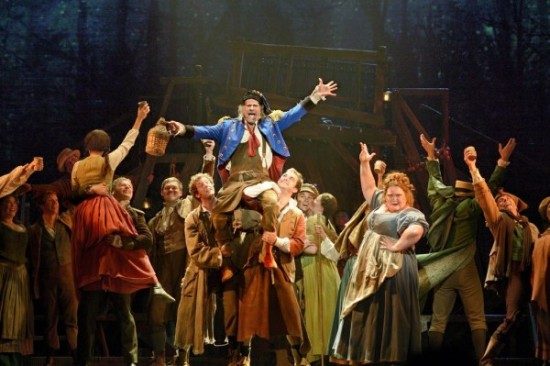 “Master of the House” performed by the Company. Photo
by Deen van Meer.

Let me confess!  I didn’t watch Close Encounters of the Third Kind until 1998, 21 years after it made its big splash into our cultural image pool.  I didn’t attend a performance of Boublil and Schȍnberg’s  Les Misérables until last night when I went to the National Theatre’s presentation of the 25th anniversary touring production of the show.

Let me also confess!  I looked forward to ending this denial of gratification.  Then, the slaughter of 20 first graders and 7 adults took place.  I took that burden to the theatre instead of my anticipation. 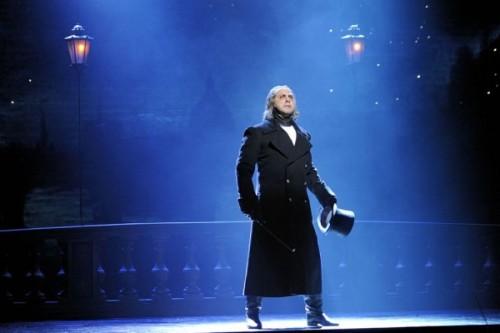 A production packed with beautiful singing voices, splendid local musicianship, fabulous visual effects, and even amusing (if stylistically questionable) projection animations successfully immersed me in its epic tale of class struggle, guilt, and love.  I was immersed in glorious images and sounds until, that is, the show’s street urchin, Gavroche, is brutally killed in battle.  Immediately, I was pulled back into the day’s tragic focus.  That real world focus then eerily merged with Les Miz’s visual iconography of hope crushed.

The French language version of Les Misérables first opened at a Paris sports arena named the Palais des Sports in 1980.  Five years later, the English translation opened at London’s Barbican Centre.  The Broadway production opened at the Broadway Theatre in 1987 at the height of the Reagan Revolution, the “me” generation, and the end of the Vietnam Syndrome.  The musical’s mixture of social action, cynicism, romantic love, and religious redemption seemed apropos.  The energy of the 1950s and 60s had all but dissipated, its idealism fallen prey to the powers of realpolitik, our own student rebellions having failed to inspire a new America.

Now, 25 years later, with the economic hierarchy of the 1980s not only resisting change but advancing wholeheartedly the interests of the upper classes and swamping their opposition, the real question is: What does this new Les Miz have to say to America and the world in 2012?

…this ‘Les Misérables’ with its beautifully rendered, thought-provoking visuals and its strong cast and excellent orchestra is well worth seeing.

To be sure, it is a fine, powerful production of a difficult script, a sung-through musical that requires flexible clear voices with range and singers with strong acting skills.  There are a few standout performances which brought these musical and the acting skills together.  Timothy Gulan plays Thénardier not only with good comic timing but with great humanity, taking the stage with his presence, his articulate voice, and his command of the dramatic.  His rendition of “Master of the House” brought the house down, and his authentic characterization lent depth to a story that could fall so easily into simple melodrama.  Briana Carson-Goodman gives Éponine, the young street girl, emotional authenticity and clarity.  Her rendition of “On My Own” demonstrated range and great empathy.  Genevieve Leclerc as Fantine captured the suffering at the heart of the play’s action with her beautiful “I Dreamed a Dream,” the most iconic of the show’s songs. Finally, Joshua Colley’s Gavroche couldn’t have been more compelling, as he embodies the urchin’s street smarts and determination to the letter, making his death all the more palpable. 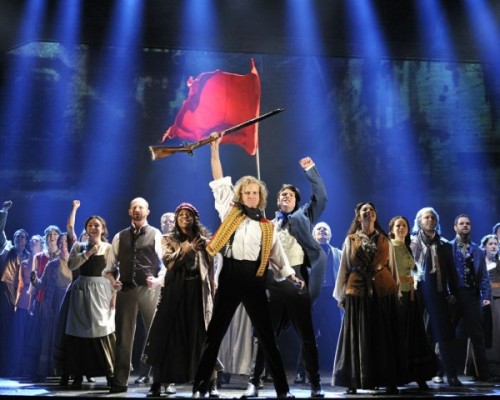 Also deserving commendations is Peter Lockyer for his performance of Jean Valjean.  The epic tale revolves around his pursuit of redemption.  Forced to steal food for his family, he is sentenced to 19 years of hard labor.  After exiting prison, he violates his parole and is about to be returned, when the Bishop of Digne (James Zannelli) offers him silver candlesticks in return for his promise to lead a good life.  Valjean’s struggle to fulfill that promise forms the core of Les Misérables’ story.  Lockyer convincingly captures the gentleman/businessman that Valjean becomes.  His rendition of “Bring Him Home” revealed the depth of the character’s desire to do good.  Lockyer’s portrayal of the criminal Valjean is less convincing, however, and seemed rushed and simplified.

Shawna M. Hamic as Madame Thénardier, Lauren Wiley as Cosette, and Devin Ilaw as Marius also delivered strong performance, even if that fierce combination of strong voice and solid acting did not always combine as thoroughly.  Hamic proved a good partner to her husband Gulan in voice and comic sensibilities.  Wiley rendered “Castle on a Cloud” beautifully, as did Ilaw “Empty Chairs at Empty Tables” remorsefully.

The actor with one of the strongest voices in the show is Andrew Varela who plays Javert, Les Miz’s villain.  What gives the musical its strange power, however, is this villain’s deeply tragic soul, a soul that drives Javert to hunt Valjean the way Captain Ahab did his whale in Moby Dick.  Unfortunately, Varela acts that tragic sensibility with only the broadest of brush strokes, leaving his suicidal “Soliloquy” feeling more hollow than tortured.

Directed by Laurence Connor and James Powell, Les Misérables gives its audience a cornucopia of images and tableaus, even in this scaled down touring production. From the opening scene where Valjean and the rest of the chain gang row endlessly on their ship to the second act barricade where the leader of the rebel students, Enjolras (played with strength and conviction by Jason Forbach), the production’s spectacle entrances the audience. With sets by Matt Kinley, lights by Paule Constable, and costumes by Andreane Neofitou each moment offers a new visual feast.

And the 14-piece local orchestra conducted by Lawrence Goldberg delivers a powerful performance of Claude-Michel Schonberg’s music, with original orchestrations by John Cameron and new ones by Christpher Jahnke.  They gave us rich clearly articulated sounds that left us bathed in the story’s feelings from beginning to end.

The question remains, however, what do all these marvelous aesthetics have to say to Washingtonians today about our lives or the state of the world? 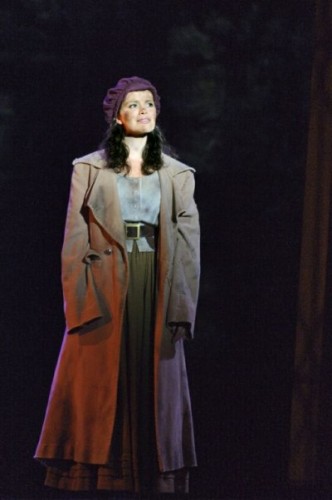 Les Misérables is essentially a eulogy for failed hopes and dreams, with the struggle for a better life ending with despair.   One of the show’s most memorial scenes, the wedding scene between Marius and Cosette, a grotesque display of celebration permeates the theatre.  The student rebellion has been crushed, Marius’s friends and comrades have died on the barricade, the Paris elites are still in charge and now dancing to the marriage vows.  When the Thénardiers deliver their caustic “Beggars at the Feast,” we want more than anything for this wedding to be a happy one.  After all, it is the traditional end of a comedy.

Hugo and his adaptors’ genius, however, lies in the fact that this wedding is dropped at the end of a tragedy.  Jean Valjean may die a happy man; Cosette and Marius may live happily-ever-after; but the ghosts of the fallen–from Cosette’s mother to Marius’s many friends–will haunt that happiness.

As the play’s survivors, Cosette and Marius, read Valjean’s final confession alone on stage, alone except for the ghosts haunting them upstage, we realize that in this Les Miz no redemption is found for no redemption is needed.  What’s needed is a world that does not manufacture the miserable, as it were: a world where the rebellions that threaten to create a better life don’t fail but succeed, where economic injustice doesn’t lead to larger and larger prison populations but to better and better jobs, where the violence that ravages our young people isn’t ignored any longer by the powers that be but addressed boldly and effectively.  What’s needed is a Les Mis with a truly happy ending.

In a holiday season marred by unspeakable tragedy, this Les Misérables with its beautifully rendered, thought-provoking visuals and its strong cast and excellent orchestra is well worth seeing.