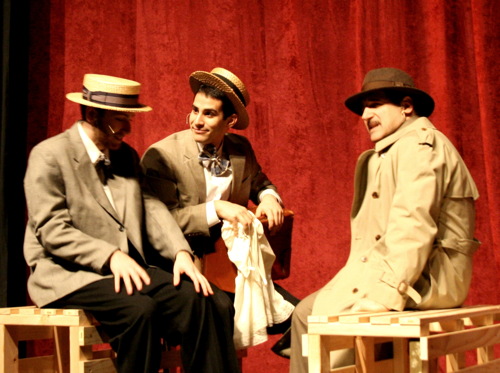 Some theatre folk believe that theatre and film are on opposite sides of the artistic spectrum, and never the twain shall meet.  Beth Tfiloh Community Theatre’s production of The 39 Steps would give these naysayers a run for their money. The 39 Steps is a stage adaptation of Alfred Hitchcock’s film adaptation of the novel by John Buchan, with a plot more convoluted than its history. A cast of four actors transforms one stage into about 30 locations and countless characters, and the result is a show that works best when its tongue is in its cheek.

It’s 1935, and Richard Hannay has nothing better to do, so he decides to do something mindless— he goes to the theater. He crosses paths with the mysterious Annabella Schmidt, who turns out to be a spy protecting a secret only known as “the 39 Steps.” Annabella then turns up dead in Hannay’s flat. Hannay flees the city, wanted for murder, pursued by two men who may or may not be the police. The adventure that follows finds Hannay getting into and out of trouble, all across the British Isles and back again. The real mystery of the story is not “what are the 39 Steps,” but “how will Hannay escape this time?” His harrowing escapes grow more and more absurd as the plot thickens.

It’s great to see a show that combines the scope and imagination of film with the resourcefulness of live theatre.

The production combines a film noir style with the wink-and-a-nudge humor of an old-timey cabaret act. It almost feels like a play within a play, but is not so obnoxiously self-aware. Characters only break the fourth wall when things go wrong— a stagehand is late to sneak a costume piece onstage, or a prop has been misplaced. You have to laugh, because the actors are quick to point out the foibles of having too many cooks in the kitchen— er, theater. 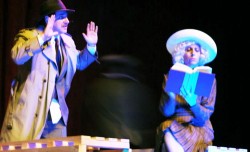 The success of the show rests on the shoulders of its four actors, directed with precision and imagination by Diane M. Smith. The actors are responsible for transforming the set to each different location, and the transformations are varied and fascinating to watch. Actors flap their coats to create the illusion of the wind on the moors. They move in time to the wheels on the rails to create a bumpy train ride. There is even some shadow puppetry for a chase scene.

By far, Zak Ferentz and Evan Margolis, who play the aptly named “Clowns,” give the best performances. The Clowns portray almost every character in the play’s arsenal. Multiple character shifts are required in the span of seconds, which the actors accomplish by changing costume pieces and altering their voices. Each character appears with specificity and a different vocal and physical quality. One of the best characters is Mrs. Jordan, the wife of a mysterious professor, who looks like Big Edie from Grey Gardens and talks like Cruella De Vil.

Lisa Ferentz plays the femme fatale Annabella, a wistful Scottish lass named Margaret, and Pamela, the ingénue that steals Hannay’s heart. Her performances are strong across the board. She does not have to execute character changes in the short amount of time that the Clowns do, but gets many laughs from her reactions to various “accidents.” She is nearly knocked off her feet by a rogue rolling chair, and though it hardly ruffled her character’s feathers, she sends the audience a quick look as if to say, “You see what I have to put up with?” 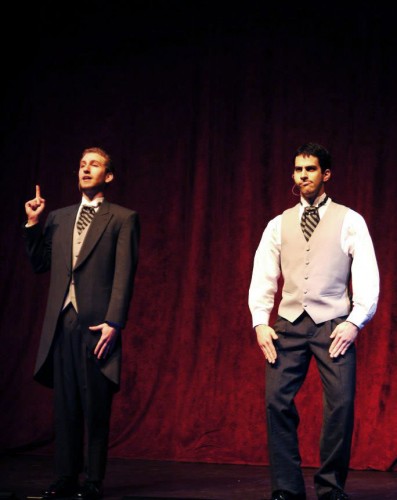 Paul Margolis plays the hero of the story, Richard Hannay. “Hero” may be a loose term for Hannay, who stumbles clumsily from incident to incident a bit like Inspector Clouseau. Margolis plays Hannay as a man whose method for solving problems is to ask an obstacle to please, if it would be so kind, move out of his way. Margolis takes a few scenes to settle into an English accent, which turns out sounding so much like John Cleese in his Monty Python days that it is hard to see the character as anyone else. Hannay’s monologue scenes lack the punch of the haphazard ensemble scenes, but perhaps it is because Margolis is limited to a single character.

A few blatant Alfred Hitchcock references will have you rolling your eyes instead of laughing. When Margaret insists that Hannay forgo escaping through the front window of her house, she puts so much emphasis on the words REAR WINDOW that you have to cringe for not seeing the reference coming. In another scene, a shower curtain stands in for a waterfall that Hannay and Pamela hide behind, which inevitably results in a Psycho reference.

A few slow-paced scenes and obnoxious Hitchcock references are easy to overlook, in a production as inventive as this one. It’s great to see a show that combines the scope and imagination of film with the resourcefulness of live theatre.