Theatre Review: ‘The Dead’ at the Quotidian Theatre Company 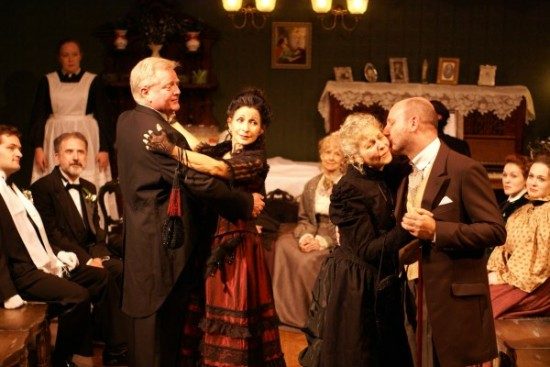 It doesn’t at first sound like “The Dead,” the concluding story from  James Joyce’s collection The Dubliners, would be a natural adaptation into a holiday musical. But that’s before Shaun Davey and Richard Nelson made their surprising Broadway production in 1999 that showed the connection to be completely logical.  After all, the setting is the annual Feast of the Epiphany dinner in Dublin held by a couple of musically-minded aunts and their music teacher niece. So what could be more natural in 1904 than to share prepared songs with one another in the height of the holiday season?  What the two do is infest the story with song that shines a light on the characters even as it brings an aching beauty to the central questions of the enduring story.

The shows mix of musicality and poetry strike just the right note.

What musical could be better suited to the Quotidian Theatre Company, the Bethesda-based company that has had a history of interpreting brainy Celtic writers from Conor McPherson to Brian Friel? The surprisingly lavish and tuneful production of James Joyce’s The Dead at the Writers Center in Bethesda is packing audiences in, proving there is space in the holiday season for something other than jingle bells. 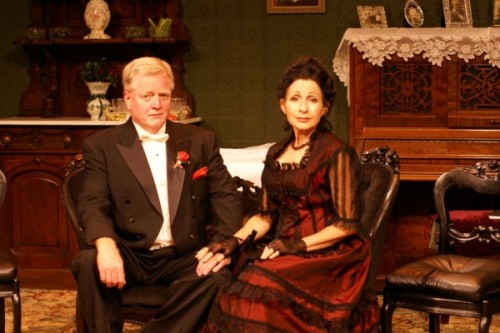 That this show is based by on traditional Irish sounds and played throughout by a five piece group of musicians playing button accordion, fiddle, cello, piano and whistle, adds an atmosphere and spirit that brings the Irish gathering both warmth and authenticity.

Steve Beal leads a very strong ensemble cast, as adept in music as in acting. He is both a narrator and participant in the simple story, which turns on contempletitive questions about life. He begins and ends with the observation that one slips through life as if on ice, with one fall leading to cracks and perhaps a fall to an unimaginable depth below.  His own cracks come as he fails to see eye to eye with a brash young Irish nationalist and in his own attempts at speech making, and yet this is done largely through song.

Jane Squier Bruns is quite affecting as the elderly Aunt Julia Morkan, whose expressive voices suggests the young vocalists she once was. It was difficult to discern whether her cough was real or in character.

Barbara Scheide is a charming support to her as Aunt Kate Morkan and Vanessa Kinzey is a strong supporting voice. Among the visitors, just about each of them has a showcase tune, including David Dubov as the tipsy Freddy, the professorial Louis Pangaro as Mr. Browne and Beal’s Gabriel.

But it is the accomplished opera singer Janice Hall, as Gabriel’s wife, that casts its own spell, both on the audience and her husband, who wonders what has brought on this emotional reverie of the past, with a song he did not know. 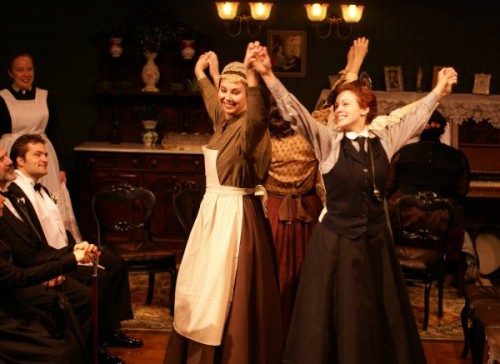 Director Jack Sbarbori does an amazing amount of work in a small space. There are 19 people on the moderate stage most of the time and they have to move around to make space for dancing or, briefly, a dinner table where guests are seated. That some have to have their back turned to the audience as they sing to others or are seated for dinner is partly a necessity, but it also adds a naturalism to the proceedings.

The Dead is just about as lavish as production as you’ll see in a small stage D.C. area production, with tasteful period setting by Sbarbori and marvelous costumes by Stephanie Mumford.

The musical direction of Valerie A. Higgs, who plays piano on stage along with musicians Peter Price, Sarah Foard, Tom Zebovitz and Eric Abalahin, adds atmosphere and wistfulness even when a cast member isn’t singing.  The shows mix of musicality and poetry strike just the right note at a time when much other fare this time of year can be rote and crass by comparison.