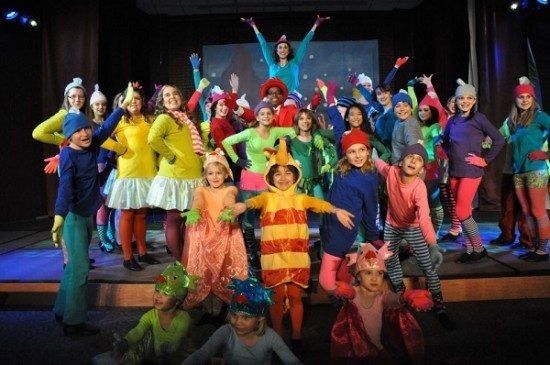 The cast of Disney’s ‘The Little Mermaid, Jr.’ Photo by Karis Haslam.

In residence at CCBC Essex, the Children’s Playhouse of Maryland is making a big splash with their latest musical, Disney’s The Little Mermaid, Jr..

Featuring a cast of 48, with ages ranging from tiny guppies age 4, all the way up to those who just turned 18, the CPM promises to deliver “quality family theatre performed by students.”  Their current production of Disney’s The Little Mermaid, Jr. delivers on that promise thanks to the terrific direction of Liz Boyer Hunnicutt and her wonderful production staff.

Everyone knows about the classic Hans Christian Anderson story about a little mermaid who longs to explore what life is like on land.  So what is The Little Mermaid, Jr.? Quite simply, it is a shorter version of the Broadway adaptation based upon the Disney film.  The music by Alan Menken and lyrics by Howard Ashman are first-rate.  I would rank them up there with another Disney song writing team known as the Sherman Brothers, famous for Mary Poppins, The Jungle Book, and perhaps their best-known song, “It’s a Small World (after all)” written for the 1964 New York World’s Fair. 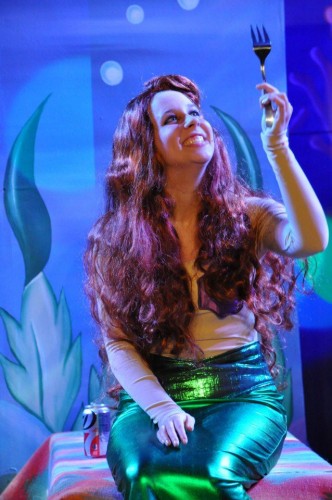 Beginning with the CPM 9 years ago as Piglet in Eyerore’s Christmas Present, Allison Comotto looked, sounded, and acted the part of Ariel,  the spunky red-headed daughter of King Triton (Joey Bird) who says that she is “as stubborn as a barnacle.”  But her performance was not a carbon-copy of Jodi Benson, the original voice of Ariel from the film.  Allison made the role her own.  There is no question in my mind that Allison understood every note and every lyric in “Part of Your World.”  Her eye expressions alone could tell the story, but her special vocal inflections mixed with her pleasing tone, made it easy for Prince Eric (Brad Bowers) to long to be part of her world as well.

An 18 year old senior at the GW Carver Center for Arts and Technology, Brad Bowers is a natural at acting as the Prince who fell in love with the woman with the beautiful voice who saved his life after the storm.  Natural is a great way to describe this up and coming performer because he acts, sings, and moves around the stage smoothly and confidently.  Never rushing his lines, all his skills came together in “One Step Closer,” featuring his pleasant-sounding vibrato, charming attitude, and his effortless dancing with Allison.

Jamie Watson is so much fun to watch as Ursula, the evil sea witch.  Her comical and commanding stage presence was highlighted in “Poor Unfortunate Souls” with her green mowhalked pals by her side, Flotsam (Zach Miller) and Jetsam (Charlie Holt), two evil and intimidating eels.  A particularly funny moment happened when Ursula said to Ariel, “tell me everything” as she used Flotsam and Jetsam as a chair and foot stool.

The Children’s Playhouse of MD’s production of Disney’s ‘The Little Mermaid, Jr.’ reeled me in, hook, line, and sinker!

What made this play so wonderful was that so many actors got to have their chance in the spotlight.  The mersisters: Aquata (Nicole Smith), Atina (Rachel Miller), Arista (Erin Sullivan), Allana (Victoria Caldwell), Adella (Caroline Halligan), and Andrina (Maddie Ulevich) were all very lovely when singing “Daughters of Triton” and a song not featured in the film called “She’s in Love.”  And who can forget Johnathon O’Neal as Sebastian the crab performing “Under the Sea,” Allison Naglieri as Ariel’s friend, Flounder, and Philip Merrick as Chef Louis singing “Les Poissons.” 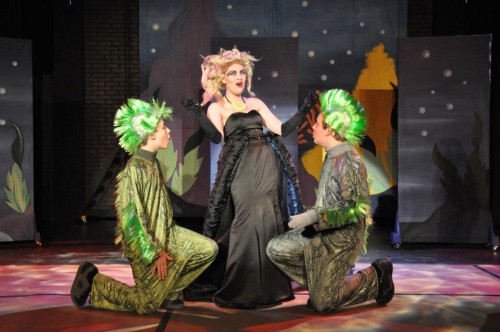 A surprise hit in the show was another song not featured in the film called “Human Stuff.”  In it, Scuttle (Thomas P. Gardner), the seagull taught Ariel about human stuff, like a dinglehopper (a fork).  The song was especially entertaining when Scuttle’s seagull friends flew in to dance and sing and have some fun:  Nicole Arrison, Nina Cicera, Zoe Feldman, Tiffany Flaharty, Claire Iverson, Rachel Miller, Nicole Smith, and Erin Sullivan.  The kickline at the end of the song brought applause from the young audience.

The Children’s Playhouse of MD’s production of Disney’sThe Little Mermaid, Jr. reeled me in, hook, line, and sinker!  The choreography by Amanda Dickson, costumes by Tracy Bird, and lighting design by Nick Logue all added to the quality of the show.  The entire cast  clearly ate their Wheaties before the show, because they were all full of energy the entire time.  Thanks to Artistic Director Diane M. Smith and everyone at CPM, these young perfomers all had as much fun on stage as I did watching them from the audience.

Running Time:  Approx. 1 hour and 30 minutes with one intermission.

Children’s Playhouse of MD’s production of Disney’sThe Little Mermaid, Jr. is SOLD OUT.  For future show information, visit their website. 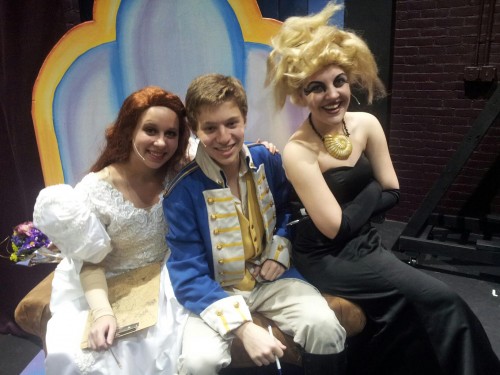