Theatre Review: ‘The Nutcracker’ by the Washington Ballet

Christianne Campbell in the Washington Ballet’s production of “The Nutcracker.” Photo by Carol Pratt.

There are many Christmas traditions that I am less than fond of.  However, as a ballet fan, and harborer of a childish attachment to Tchaikovsky’s “Nutcracker Suite,” I would not have expected that my fondness for The Nutcracker ballet to join the ranks of my fondless traditions.  With a plot that’s more spectacle than substance, this seasons’ The Nutcracker by the Washington Ballet, fell short of my expectations.  This is not to say that the performance lacked good execution, and perhaps, my disappointment is due in part to the fact that I am no longer a member of the target audience.  I mean, let’s be honest: this show is for kids.

…a great show for kids

I’ll make one thing abundantly clear:  It was not the children in the cast nor in the audience that lead to my dissatisfaction.  In fact, the children on stage added a hilarious charm to the entire performance, showing huge levels of talent and discipline and even raising a few audible “AWWs”  from my lips. 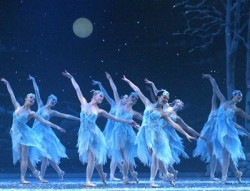 Dance of the Snowflakes, Act I, The Nutcracker, Washington Ballet. Photo by Carol Pratt.

What I take issue with is the story’s general fluffiness, paired with a few poor directorial decisions and casting calls during the first act.  The first scene, the Christmas party, is so overwrought with performers that the audience can hardly pick up on any of the actual choreography, let alone distinguish all the characters.  The transformation of the Nutcracker Prince, from doll to dancer, is so brief and uncentralized that when he later appears on stage without a mask, I wasn’t sure who he was.  This lack of focus was further complicated when Artistic Director Septime Webre decided to cast a different, and much taller, performer to dance under the mask to escort the lovely Clara through the second act.  Between this and a very stiff, uncomfortable performance from Aurora Dickie in the role of the Snow Queen, intermission came with unenthusiastic feelings.

Let me not get ahead of myself, however, before I acknowledge the director’s creative approach.   Performed at the Warner Theater in Washington, TWB’s Artistic Director Septime Webre puts a patriotic spin on the originally German Nutcracker story.  It is set instead in historic Georgetown, Washington D.C.,  circa 1782.  This essentially means that the Nutcracker becomes George Washington and The Rat King, King George III.  There are even more conversions during the second act that are sure to please all American history buffs.   Among the many variations, Webre strays neither from the original story, nor from Tchaikovsky’s music, without which the show could not maintain its allure.  Young Clara still receives the Nutcracker doll from her Uncle Drosselmeyer during a bustling Christmas Party in Act One, and is taken on a boat to the Land of Sweets (in this case the Land of Cherry Blossoms) to visit the Sugar Plum Fairy (who stays the same) in Act Two.  While I’m glad the story kept its integrity, I found Webre’s adaptation to be too moderate to be remarkable. 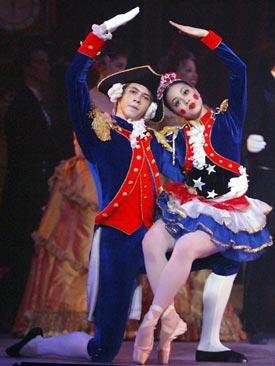 Fortunately, in contrast to the first act, the second act was very enjoyable.  There were excellent performances by Brooklyn Mack as the Frontiersman and Ji Young Cahe as the Sugar Plum Fairy, and I thoroughly enjoyed the dance of the Anacostia Indians, originally the Arabian Dance, as well as the Chinese and Cardinal dances.  All in all, I was relieved to be able to see the choreography, the costumes, and the dancers, most of which were excellent.

I fear I might have given the wrong impression with my initial expression of disappointment.  This performance has many wonderful aspects: elaborate costumes, professional level ballet, and even adequate comic relief.  I also have a high level of respect and admiration for The Washington Ballet.  I simply felt that in this Nutcracker there weren’t enough of the parts I loved.  The hilarious mice costumes and hip hop dancing rat soldiers just didn’t last long enough? Rather, there was an over-embellishment of what is already a pretty cheesy story.

But hey, maybe I’m just a Grinch.  It’s a great show for kids, and I loved it as a kid, but these days I just wish I was seeing something more original and inspired.

The Nutcracker will be shown from now until until December 23rd at the Warner Theater in Downtown Washington.  For more information or tickets, please click here .