Theatre Review: ‘What a Girl Wants’ at Strand Theater Company 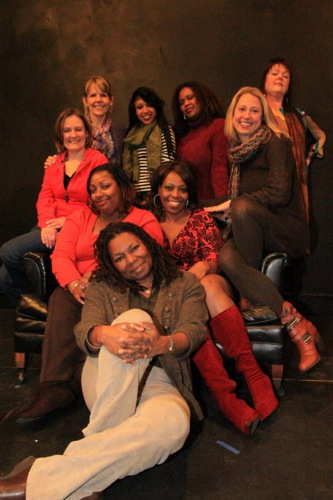 The Cast of ‘What a Girl Wants.’ Photo courtesy of Strand Theater.

The Strand Theater Company, where Deletta Gillespie’s What A Girl Wants is currently playing, has a rather unassuming exterior. It is nestled in the heart of Station North, Baltimore’s slowly gentrifying theatre district. Inside, a dramatic high ceiling, low stage, and comfortable chairs make it a truly unique space in which to see anything, let alone a work of such verve and enthusiasm.

The play follows six women seeking an answer to the eponymous question: what is it, exactly, that women really want? As they organize a charity fashion show, they converse about this subject, suggesting subtopics in the realm of love, life, and material goods. While some of the women offer the traditional “things are nice, but don’t keep you warm at night” mentality, shoe-hoarding Rica (Lisa F. Scott) espouses: “Money can be used as a heat source. You just gotta find a man with enough of it to burn!”

At least in some respects, despite the coffee and wine, clothing racks adorned with glittering dresses, and some beautiful hats, the play has more the timbre of a girl’s sleepover than a grown woman’s get-together. It owes this in part to the impromptu (and surprisingly well-choreographed) sing-alongs, musical interludes that felt slightly out of touch with the rest of the show, despite Patience’s (Erica Poe) stunning singing voice. While rhythmically sorting shoes in an assembly line to Harry Nilsson’s “Coconut” makes sense, thematically it was pretty strange, considering some of the subject matter.

The cast of characters includes, for instance, a lesbian widow (played in previews by the playwright herself, though later performances will be done by Renee V. Timms), a former battered wife (Quiera Monet), a single (and lonely) salon owner (Signe Renn), a preacher’s wife, a serial monogamist and suspected gold-digger, and a happily married college professor (Peg Nichols). While some characters can lend themselves to the potential for revelry, the play became tonally difficult to follow, wavering between exuberant and maudlin.

‘What A Girl Wants’ is phenomenally thought provoking, entertaining, and enlightening.

That being said, Gillespie (who also directed the production) has quite a lot to be proud of. Despite some last-minute cast changes, the show ran very smoothly, and the acting was quite seamless and well coordinated, generally difficult given such a large cast. The writer exhibits a remarkable knowledge of popular culture, allowing a discussion that ranged from adult toys to Ugg boots to contemporary political discourse. The dialogue on success and loneliness was truly moving, especially the line that “empty has the nerve to come and keep you company.”

All in all, What A Girl Wants is phenomenally thought provoking, entertaining, and enlightening. I look forward to seeing what managing director Elena Kostakis and new artistic director Rain Pryor have for the rest of the season.

Running Time:  1 hour and 40 minutes with a 10-minute intermission.