With its incredible cast of performers as led by director Derek Goldman, Round House Theatre’s world premiere production of Young Robin Hood will delight audiences of all ages this holiday season. With spectacular fight sequences and some of the crème de la crème of the DC talent pool, the play takes us into the early days of the Robin Hood characters.

First there is William Fitztooth (Craig Wallace) who is the king’s keeper of Sherwood Forrest and  adoptive father of Robin Hood (Joe Isenberg). Next is Philip (Davis Chandler Hasty), who is Robin’s friend (at least at the top of the show they are) and the son of Guy of Gisbourne (JJ Kaczynski) — if he was my neighbor I’d be watching my back 24/7. 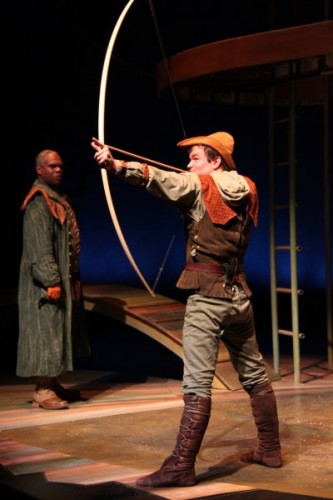 We then have our heroine Marian (Laura C. Harris) who is the daughter of the Sherriff of Nottingham (Mitchell Hébert). Marian is drawn as a strong character and not just as a stock romantic ingénue. She is also aided by her trusty falcon Diana (Emma Crane Jaster) as she rescues Robin and Fitztooth from the Sherriff. Fitztooth is in jail for aiding a miller’s family (Sean Silva, Allie Villarreal, and Kimberly Schraf) whose home was burned to the ground.  The miller was then killed for not being able to pay the high taxes imposed by Prince John. That is as much of the plot as you get forsooth.

Performance-wise, I could not have been happier. Joe Isenberg is dynamite as Robin with his swinging and climbing all over the set.  His scenes with Laura C. Harris create wonderful chemistry for the two actors. It’s very nice when you can root for your leads.

As the Sherriff of Nottingham, Mitchell Hébert is hysterical. His comic timing is impeccable and with this fresh take on the character he is mean but funny as well.

Craig Wallace as William Fitztooth commands the stage. He has a deep rich sound and we see both sides of his character. There is the fatherly side and the official side. He takes his job very seriously and will do anything for his son.

…highly recommended for people who want to spend some quality time with their families.

Watching Kimberly Schraf onstage is always a treat. While her role of Rosalind is not huge she makes the most of her stage time, and no matter how you dirty her up you can’t hide her striking features.

JJ Kaczynski’s Guy of Gisbourne is just plain slimy. He always plays the victim but you know he is out for himself.

Davis Chandler Hasty as Philip gives a solid performance as does Sean Silva and Allie Villarreal as the kids of the miller who are named Much and Joan.

Derek Goldman’s direction takes a good script by Jon Klein and makes it a great theatrical experience. Goldman knows how bring the best out of his actors and he has definitely done so in this production. 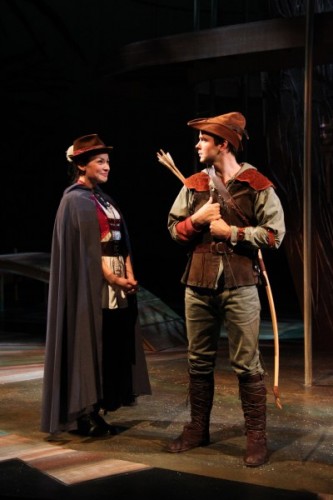 There are a lot of fight sequences in this show and they are all choreographed by the very talented Casey Kaleba. Fight direction is one of the hardest jobs in the theatre because if the fights look staged or fake it can bring the whole show down. I am happy to say this is not an issue in this production, as the swordplay and everything else fight-wise looks very real.

Misha Kachman’s Sherwood Forrest includes a full size tree complete with a platform for Robin to swing in on. Ivania Stack’s costumes include plenty of men in tights and a thoroughly wonderful wig for the Sherriff. Lighting by Kenton Yeager provides us with all the right moods for the piece and Matthew M. Nielson’s very percussive sound design adds the final great touch to the proceedings.

All in all, Young Robin Hood is highly recommended for people who want to spend some quality time with their families in the theatre this holiday season. It gives you a chance to introduce your kids to live theatre with some really good talent on all fronts. It is also highly recommended for people who want to see stage combat at a very high level. And last but certainly not least, just go for an evening or afternoon of enjoyment. At this time of year it’s good to do that once in a while and there is no better place than Round House Theatre to do so.

Advisory: Recommended for ages six and up.