1. Les Misérables at the National Theatre

“…this ‘Les Misérables’ with its beautifully rendered, thought-provoking visuals and its strong cast and excellent orchestra is well worth seeing.” -Robert Michael Oliver, MD Theatre Guide

Synopsis: Cameron Mackintosh’s legendary production of Boublil and Schönberg’s classic sweeps its audience through an epic tale of passion and destruction in 19th century France. Discover a nation in the grip of revolution, where convict Jean Valjean is on the run. Hunted relentlessly by the policeman Javert for breaking his parole, he must leave his past behind and keep his vow to raise the young orphaned Cosette. But with revolution in the air and Javert closing in, Jean Valjean has no choice but to fight for his life and sacrifice everything to protect the people he loves. 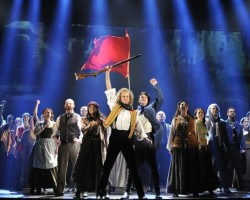 “One Day More” performed by the Company. Photo by Deen van
Meer.

2. The Nutcracker at The Lyric

In an unprecedented partnership of four Baltimore cultural organizations, The Baltimore Symphony Orchestra, Baltimore School for the Arts (BSA), Maryland Institute College of Art (MICA) and The Modell Performing Arts Center at the Lyric will come together for the first time this December to present Pyotr Ilyich Tchaikovsky’s full-length holiday classic The Nutcracker. 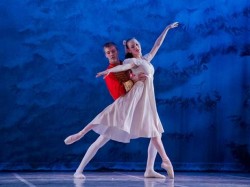 ‘The Nutcracker’ at The Lyric. Photo courtesy of The Lyric.

3. The Pajama Men: In the Middle of No One at Woolly Mammoth

“These guys have the goods to become very big comedy forces on TV and film.” -Roger Catlin, MD Theatre Guide

Synopsis: Originally from Albuquerque, New Mexico, The Pajama Men have become stars of the international comedy circuit. They smashed all previous box office records at London’s Soho Theatre in 2010, earned the title “Double Act of the Year” by The London Times, and have produced the highest rated show at the Edinburgh Fringe, the world’s largest arts festival. Accompanied onstage by guitarist Kevin Hume, this holiday season The Pajama Men bring their trademark style of blink-of-an-eye character switches and plot twists to DC. 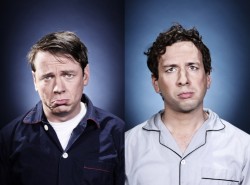 Synopsis: In a magical kingdom fathoms below, the beautiful young mermaid Ariel longs to leave her ocean home to live in the world above. But first, she’ll have to defy her father King Triton, make a deal with the evil sea witch Ursula, and convince Prince Eric that she’s the girl with the enchanting voice. 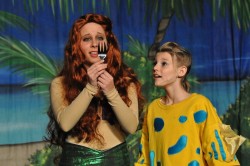 5. How I Paid for College at The Hub Theatre

“… a resounding yes, with kudos to the fine production team who conspired to put this terrific show together.” -Brian Bochicchio, MD Theatre Guide

Synopsis: Seventeen-year-old Edward Zanni, a feckless Ferris Bueller type, is Peter-Panning his way through life with his screwball theater friends. When his businessman father remarries and pulls the plug on Edward’s dreams, the aspiring thespian turns to a life of disorganized crime. 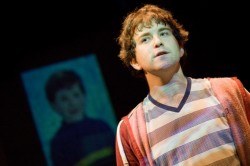