Top 5 Shows of The Week: ‘A Christmas Carol’ Edition

1. A Christmas Carol at Ford’s Theatre

Synopsis: Join the ghosts of Christmas Past, Present and Future as they lead the miserly Ebenezer Scrooge on a journey of transformation and redemption. Originally conceived by Michael Baron, this music-infused production captures the magic and joy of Dickens’s Yuletide classic. 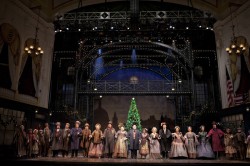 The cast of the 2012 production of ‘A Christmas Carol’ at Ford’s Theatre. Photo by Scott Suchman.

In this solo version of A Christmas Carol, actor Paul Morella gives a mesmerizing performance.

Synopsis: Paul Morella brings this unique and memorable version of A Christmas Carol to life. Adapted from Charles Dickens’ original novella and reading tour, Morella’s solo version will transport you back to Victorian England and into the heart of this classic morality tale. This Christmas narrative has never been more compassionate, intimate or heartwarming. 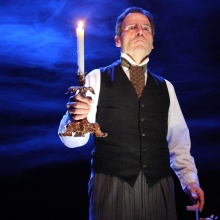 Paul Morella in ‘A Christmas Carol: A Ghost Story of Christmas.’ Photo by Stan Barouh.

3.  A Commedia Christmas Carol at Faction of Fools

“Faction’s lively Carol will entertain the “cheery” in us all…” -Robert Michael Oliver, MD Theatre Guide

Synopsis: When Pantalone Scrooge is visited by his old friend Dottore Marley, an unforgettable adventure of ghosts, yuletides, and omens sets the greedy old man on the rocky road to redemption. Dickens’s London comes alive in a new way with a Commedia twist and a fresh new script. 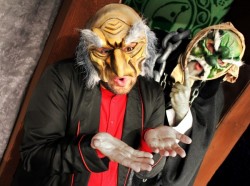 Directed and Choreographed by Jenny Male, this production can be summed up in one word, “FUN!”

Synopsis: Baizley’s fantastical and whimsical adaptation of A Christmas Carol places a unique theatrical spin on Dickens’ timeless classic by telling the story through the eyes of an acting troupe full of clowns, lovers, masked revelers, and acrobats. This 90-minute show unfolds into a fast-paced, tumbling ferris wheel of magic, music, movement, and light… a fabulous, joyous holiday journey for the entire family! 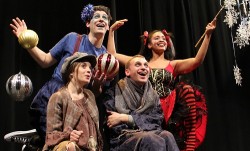 Local composer, Michael Hulett has created a musical version that is enchanting.

Synopsis: This is the original tale just as Dickens wrote it, with the festive music and delightful lyrics that have captivated Baltimore audiences year after year. Relive the cherished tale of Scrooge and Marley, Bob Cratchit and Tiny Tim, and a host of unforgettable characters singing and dancing their way into your heart.

The cast of ‘A Christmas Carol.’ Photo courtesy of Musical Artists Theatre.