‘A Quick 5’ with Alan Muraoka 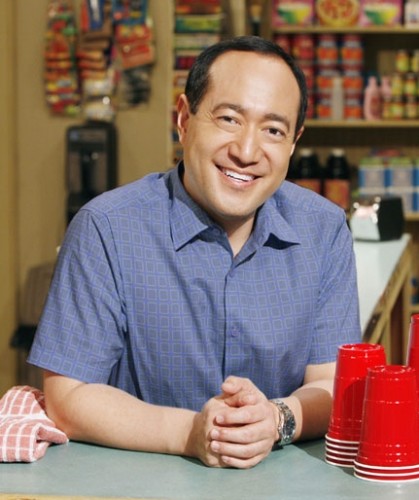 Today’s column is brought to you by the letters A and M. If you think I’ve gone off the deep end, don’t worry that happened a long time ago. I just thought seeing as Alan Muraoka has been part of the adult cast of Sesame Street for the past 14 years it would be an appropriate start for today’s column. If you have a child that watches Sesame Street then you know that Alan plays Alan the proprietor of Hooper’s store. It is interesting to note that Alan continues the tradition of a theatre performer in the role of the proprietor of Hooper’s Store. For those that remember Mr. Hooper in the show’s early years, the character was played by veteran stage actor Will Lee. What you might not know is that Alan is an accomplished actor and director. He has been seen on Broadway in Miss Saigon, The King and I, Pacific Overtures, Mail and Shogun The Musical (Yes they wrote one). A few choice directing credits include an all Asian production of Falsettoland for the National Asain American Theatre Company, Empty Handed for Musicals Tonight, Xanadu for Lyric Theater of Oklahoma, Urinetown for Trintiy Unversity, a three Taiwanese city tour of Making Tracks for Second Generation and cabaret acts for Ann Harada, Stephanie D’Abruzzo, and John Tartaglia. He has been seen in the films It Could Happen to You and Day of Independence. Alan is currently collaborating with composer Phoebe Kreutz on Awesomer & Awesomer!!!, a musical revue, and Screaming Like a Fool, which highlights the songs of Zina Goldrich & Marcy Heisler. I first met Alan at Paper Mill Playhouse in Mikado Inc and have been following his career ever since. From doing The Samaurai Stomp (you had to see it) to working on the longest running children’s educational show in history, Alan Muraoka is very very talented and deserves all of his success.

My first professional job was as a “Kid of the Kingdom” at Walt Disney World back in 1982. The”Kids” were the singing and dancing troupe that performed in front of Cinderella’s Castle 5 times a day and the show was called, “Disney Medley.” There was a nationwide search, so the 12 Kids were from all over the country. I was cast out of Los Angeles. I loved it. It was hot, humid, and our first show was at 1:00 and our last show was at 10:00 at night. But it taught me discipline, and we had to tech our shows in the middle of the night, so we got to explore the Magic Kingdom with no one else around. I got to walk into the back of the Peter Pan ride as they were cleaning in and saw all of the miniature buildings of London close up.

What do you remember about your first audition for Sesame Street and how many auditions did it take for you to get the job?

I was performing in the Broadway revival of “The King and I” when I got the call to come audition for “Sesame Street.” This was back in 1997. The only thing I knew was that they were looking for someone to take over Hooper’s Store. At my first audition there was only the Casting Assistant who put me on videotape. I thought that was the end of it, but I got a call back a week later and was given more sides. The Casting Director was at my callback, and I finished and again, I thought that was the end of it. But I was asked to come back and do more sides and sing a song. By then I knew that they were looking for an Asian American actor, and my BFF Ann Harada was also called back. We had the same sides and we practiced together, and at one point she said, “You are gonna get this,” and I said, “You know, you might be right.” It was such a perfect fit for me. At my 4th and final callback I had to improv with one of the Muppets, Telly Monster. Now I had taken a lot of improv classes so I knew the rules of good improv, the first one being,“Never negate.” So we start the scene, and I asked Telly, “Would you like me to make you a sandwich?” to which he replied, “NO!!!”I think I started flop sweating at that point, and he made it as difficult for me as he could. In hindsight I think it was a deliberate test to see how quick I was and how well I could think on my feet. Needless to say, I got the job and it’s been 14 years and I’ve loved every minute of it. 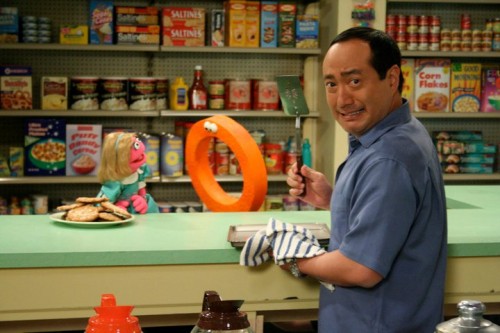 You performed in a musical at Paper Mill Playhouse called Mikado Inc. which was a modern version of Gilbert and Sullivan’s The Mikado. What are your memories of working on that show?

That was my first show in NYC which had a predominantly Asian American cast, and so it was an amazing experience and I made friendships that have lasted to present day. That was the show I met Ann Harada on, and we are still very close. I had the dubious honor of driving the 17- passenger actor van, cause I lived near one of the pick up points and I wanted the extra money that came with it. This was back in 1990, and I had to park the van at 10th and 46th, which at that time was where all the prostitutes hung out. So I was propositioned many, many times during our run. It was also around the time that the Westway Diner opened in Hell’s Kitchen, and that became the hangout after we got back to the city from Milburn, where the Paper Mill Playhouse is located. Ah, great memories!

Since being on Sesame Street do you get recognized a lot in public and if so what is your best story about meeting one of your fans?

Whenever I’m at Costco, I get recognized because of course it’s the place where families shop. So my joke is that I’m the Brad Pitt of Costco. But since I’ve been on the show for 14 years, it can happen anywhere. I think my favorite story was during filming, and Sheryl Crow was visiting the set. And we saw each other, and she said, “Oh my God, Alan, I’m so excited to meet you,” at the exact same time as I was saying the same thing to her. It was hysterical and amazing. I love meeting fans of the show cause they are always so gracious and respectful and appreciative of the work that Sesame is trying to achieve.

Sesame Street set the bar for quality children’s educational programming. As the show starts it’s 44th season, why do you think Sesame Street has lasted as long as it has when others that came after it have not?

It’s the writing, hands down. We are lucky enough to have such a talented group of writers on our show who know how to write on two levels, for both the children and the adults who watch with their kids. The comedy and social satire of our show is very strong, and I think the audience appreciates that. And we try not to talk down to the kids or to be too saccharine, because that can come off as insincere. John Weidman is one of our writers, which still blows my mind. I had the pleasure of working with John in both the Broadway revival of “Pacific Overtures,” and the Lincoln Center revival of “Anything Goes.” And all of the writers are on the same par as John, so I’m in very good hands.