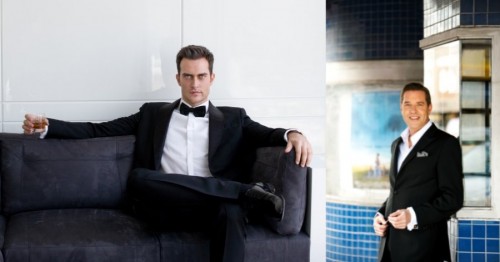 What better way to ring in 2013 than with a concert featuring one of DC’s national treasures and a really talented Broadway vocalist. Cheyenne Jackson as accompanied by members of the National Symphony Orchestra with Steven Reineke at the helm rang in the new year at Kennedy Center’s Concert Hall with a program entitled “Music of the Mad Men Era.” As the title suggests the majority of the music was inspired by the hit AMC TV series Mad Men, which is set in the 1960s. With songs ranging from “I (Who Have Nothing)” to “Luck Be a Lady” Jackson’s repertoire bought us back to the era of smooth and class.

Something that was big back in the 50s and 60s were four part harmony singing groups. To illustrate this Jackson with his musical director Ben Toth and singers Ben Lurye and Ric Ryder, performed “Angel Eyes” and “Walking My Baby Back Home” as arranged by Jonathan Bartz. The group harmonies evoked memories of The Four Aces and other vocal groups of the day. Jackson’s new approaches to some of his songs also were highpoints of the evening. With the accomplished guitarist Steve Bargonetti, we had a haunting rendition of Irving Berlin’s “What’ll I Do” as arranged by Bargonetti as well as a nifty pairing of “I Get Along Without You Very Well” and “Don’t Get Around Much Anymore” as arranged by John Oddo.

As you might have guessed I am calling out the arrangers in this concert and with good reason. The Mad Men era was a time of swinging cool musical arrangements with reed and brass sections which always knew how to cook. This was illustrated by Billy May’s arrangement of “Luck Be a Lady.” Between Jackson’s vocal and the orchestration, this was a prime example of the mood from that time period. Fred Barton’s arrangement of “Besume Mucho” was another illustration. The subtle Latin beats painted a picture of that cool lounge sound we were accustomed to hearing.

Some of you might not know that aside from being an excellent singer Jackson is also a composer. We had a sample of this with a song entitled “Don’t Look at Me” that will appear on Jackson’s new CD due out in April. If that one song is any indication of his songwriting talents, Jackson’s solo CD will be a must have. We also were treated to a composition by Jackson’s pianist and Musical Director Ben Toth called “Mad Girl’s Love Song,” which is a melody set to words by poet Sylvia Plath. Not only did Jackson do the song justice with a wonderful vocal quality but Toth was lucky enough to have legendary orchestrator Don Sebesky score the piece. Now that is what I call making a splash. As if all of this were not enough special guest vocalist and Tony Award winner Nina Arianda joined Jackson for “Somethin Stupid.” Arianda, who I had only seen in dramatic roles, showed us that she has the equipment needed to be a leading lady in a musical. Jackson, who hails from Washington State, also dedicated one song to each of his parents who happened to be in attendance. They were totally surprised.

Amidst all of the singing, Steven Reineke with members of the NSO topped off the evening with some orchestral selections. Reineke is always fun to watch conduct and the orchestra sounded as glorious as ever. It came complete with a Burt Bacharach medley as arranged by Wayne Barker, Henry Mancini’s “Charade” as arranged by Timothy Berens, and even a medley of music from the TV Series Mad Men arranged by Geoff Stradling, Reineke once again showed his talents as a conductor and also how he can put together a great concert.

You know how some New Years Eve concerts are just too cheesy for words?  Well this concert was anything but. With Jackson’s likable personality and stunning vocal ability, the great NSO backing him with maestro Reineke, the vocal additions of Lurye and Ryder, Nina Arianda’s unknown vocal capability and Steve Bargonetti’s expert guitar stylings, this is what I call a cool, swingin way to ring in 2013.

Running Time: Two hours and ten minutes with one intermission.

“Cheyenne Jackson…Music of the Mad Men Era” was a one night only concert performed on Dec 31st , 2012 in the Concert Hall of The Kennedy Center.