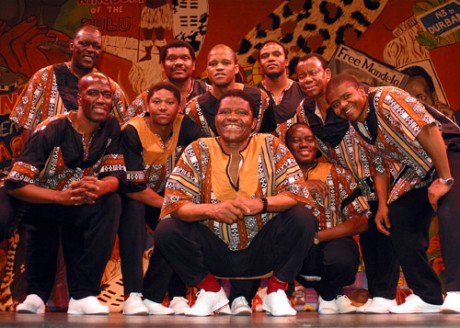 More than fifty years after Joseph Shabalala—then a young farm boy turned factory worker–founded Ladysmith Black Mambazo, this renowned South African a cappella ensemble continues to transport audiences worldwide with its signature brand of soft, sung eloquence.  A blend of two South African musical forms, isicathamiya and its precursor mbube, with Christian gospel music, Ladysmith Black Mambazo’s music gained national prominence in their homeland decades ago, as they repeatedly swept the isicathamiya competitions that were held in the men’s worker hostels in Durban and Johannesburg.  In fact, they so dominated these contests that they eventually were disallowed from further competition though welcomed to perform purely as artists.

This virtuosity of Ladysmith Black Mambazo was on full display at Strathmore Hall as this multigenerational, 9-member ensemble enthralled the audience with their symphonic a cappela sound, their voices rising and falling like the string section of a world-class orchestra.  Primarily led with quiet authority by Founder Shabalala, the distinct personas of each member of the ensemble emerged over the course of the two-hour concert.

The concert encompassed at least 18 songs, including such well-known selections as the standard bearer of the mbube form, “Wimoweh,” [The Lion Sleeps Tonight], which began the concert, delighting the audience with its whispering familiarity.  Each of the other songs, from the poetic “Rain, Rain, Beautiful Rain” to the amusing “Yangiluma Inkukhu [the Biting Chicken]” and the lyric “Yinhle Lentombi [This Lady Is Beautiful],” continued the felicity of rapport between the ensemble and the audience.  Performed with mesmerizing combinations of foot-snapping, toe-stepping, high-kicking, hand-clapping synchronized movements characteristic of the isicathamiya form, the evening also featured stunning, crowd-rousing solo dance improvisations performed with good-natured, competitive zeal by different members of the ensemble.

…one saw the pure, sustaining power of this music for a people and their five-hundred year struggle for freedom. 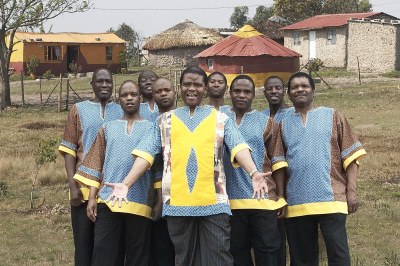 The prototype form of isicathamiya dates back to World War I.   Zulu men who found work in coal mines and factories formed vocal ensembles with from 4 to more than 20 singers that performed in call-and-response fashion.  Isicathamiya groups sing in four-part harmony, typically led by a tenor soloist, but all vocal ranges are represented even though the bass vocalists are the greatest in number.

The distinctive sound of Ladysmith Black Mambazo evolved from music heard in a series of dreams by Founder Joseph Shabalala in 1964.  It is a haunting, soft waterfall of harmony that lifts the listener far away from the lush pleasantries of Bethesda’s Strathmore Hall to a dreamlike place where outsiders dare contemplate the centuries of unbearable hardship under South African apartheid. There were times during the performance at Strathmore when the ensemble stepped back from the microphones and, in their clear, unamplified voices and syncopated dance movements one caught a glimpse, however briefly, of brutally-worked, meagerly-paid South African miners finding solace in song and syncopation sung so softly so as not to wake their sleeping overseers.  For a moment, the glamour and glory of Ladysmith Black Mambazo’s international acclaim fell away and one saw the pure, sustaining power of this music for a people and their five-hundred-year struggle for freedom.

In those moments, I was reminded of the remarks of Nobel-Prize winning poet/playwright Derek Walcott.  As a Caribbean writer, Walcott speaks of the epic nature of art that first gives voice to the collective experiences of a people.  He speaks of the cumulative power contained in this work that first brings an oral culture into what Scholar and Sweet Honey and the Rock founder Bernice Johnson Reagon calls the “document and artifact culture” of the West.  Indeed, for most Westerners, Ladysmith Black Mambazo is the cultural messenger who has brought the collective oral traditions of South African workers and the Zulu people into our field of vision.   As Founder Joseph Shabalala intimated, the work of Ladysmith Black Mambazo—with all its intricate, melodious, and ultimately uplifting beauty—is at a heart a love song to the South African people.  They, and their legacy of struggle and endurance, are the source waters of this extraordinary music.

As US audiences know well, this Grammy Award-winning ensemble (and winner of multiple other awards as well), quickly gained international acclaim through their collaboration with music legend Paul Simon on his landmark 1986 album,”Graceland.”  Long referenced as an iconic representative of world beat music, Ladysmith Black Mambazu has subsequently recorded with scores of other musicians around the world, including Stevie Wonder, Dolly Parton, Sarah McLachlan, Josh Groban, Emmylou Harris, Melissa Etheridge,and many others. Their film work includes a featured appearance in Michael Jackson’s “Moonwalker” video and Spike Lee’s Do It A Cappella. They’ve provided soundtrack material for Disney’s The Lion King, Part II as well as Eddie Murphy’s Coming To America, Marlon Brando’s A Dry White Season, Sean Connery’s The League of Extraordinary Gentlemen, James Earl Jones’ Cry The Beloved Country, and Clint Eaastwood’s Invictus. A film documentary titled On Tip Toe: Gentle Steps to Freedom, the story of Ladysmith Black Mambazo, was nominated for an Academy Award.

Ladysmith Black Mambazo, often called post-apartheid South Africa’s premiere cultural ambassadors, brought their performance to a close with a jubilant encore rendition of the Christian hymn, “Amazing Grace,” reminding the audience standing in ovation that this ensemble’s international cultural journey is a deeply spiritual one as well.

The concert was presented as a one night only event at The Music Center at Strathmore on Jan 25th, 2013 For future events at Strathmore click here.