Dance Review: ‘Alice’s Adventures in Wonderland’ by the National Ballet of Canada at Kennedy Center 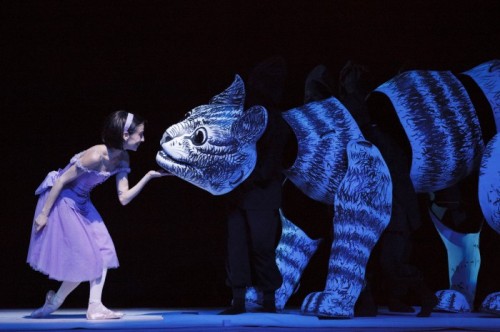 Often regarded as antiquated in contemporary culture, classical ballet is unfortunately no longer among our society’s most awe-inducing art forms.  As we are driven towards three-dimensional, multi-sensory and exceedingly graphic entertainment experiences, ballet and dance productions can easily fall by the way side.   That being said, The National Ballet of Canada’s (NBOC) Alice’s Adventures in Wonderland, does no such thing.

… we, along with Alice, are sent down the Rabbit Hole.

It’s quite spectacular actually.  The three-act adaptation of Lewis Carroll’s childhood classic covers all the bases: extraordinary set design, lavish costuming, and of course the fancy special effects.  Christopher Wheeldon’s choreography, while falling under the category of classical ballet, uses a rich repertoire of miming and slapstick comedy.  The whimsical yet mystical mood of the evening is without a doubt aided by the original score composed by Joby Talbot, which adheres well to each scene’s personality. 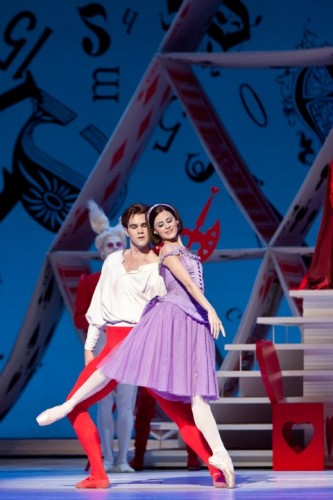 The story begins, of course, at a party.  Or rather, right before the party.  Alice, played by Jillian Vanstone (All mentioned dancers are listed from the program on January 18, 2013.), is entertained by Lewis Carroll himself, played by Aleksandar Antonijevic, who reads stories and performs magic tricks.  The gift of a red rose to the adoring Alice from a young Jack, played by Naoya Ebe, is noticed by the girl’s painstaking mother, played by Greta Hodgkinson, triggering a swift dismissal of the boy and much pouting on behalf of Alice.

To no avail, the party continues.  Suddenly, as if by magic, Lewis Carroll transforms into the White Rabbit, and we witness the show’s first amazing feat of set design:  a mysteriously growing dining table with matching jelly mold.

And so we, along with Alice, are sent down the Rabbit Hole.

As many of you know, this story involves physical transformations and over-sized characters:  Alice shrinks, then grows, meets a giant cat, and so on.  While creating this effect may be rendered difficult in a stage production, NBOC’s design team achieves it quite masterfully through the use of video and unique set pieces.  Alice’s initial “fall” down the rabbit hole involved a giant rotating projection of color and a life size puppet of the dancer herself.  Then during the first act, after Alice eats the enigmatic tart which causes her to grow to the size of a large hallway, a three dimensional model of the corridor, into which Alice physically climbs is used to create the illusion.  Neither of these however, drew the audience’s attention quite as much as detachable Cheshire Cat, cleverly constructed of about eight crew members in black body suits, each holding a body part, which opened the second act.

The production did include a few key storyline alterations.  Most notable was the romance between Alice and Jack (Ebe), who becomes the Knave of Hearts beyond the rabbit hole.   While the Queen of Hearts, transformed from Alice’s mother (Hodgkinson) in the opening scene, is exactly as hilarious and conceited as we’d expect, we do meet her King of Hearts, played by Rex Harrington, in the third act, when he is revealed reading a newspaper in the skirt of her enormous red dress.  The final scene of the ballet takes us to the present day picnic in the park, at which point we realize that the entire production was part of a dream sequence. 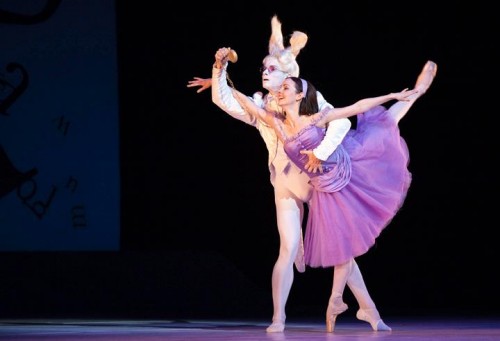 Jillian Vanstone’s splendid performance as Alice certainly calls for applause, as the dancer was on stage for nearly the entire production.  Never-fading, Vanstone brought a charm to the character that I hadn’t expected.  While the original story may have you think that Alice isn’t much more than a lost, doe-eyed teenager, Vanstone’s character was completely engaged through almost every scenario, be it dancing on the table at the tap-dancing Mad Hatter’s Tea Party, played by Robert Stephen, or dodging a bloody ax at the sausage-making cook and Duchess’s house, played respectively by Stephanie Hutchinson and Kevin D. Bowles.

The ballet’s large production budget is well accounted for in the extensive list of special effects.  Yet, I’m forced to admit that the grandeur on stage has a tendency to overshadow the show’s choreography as well as the simple yet powerful stage presences of the many performers.   That being said, I’d gladly see it again.

The National Ballet of Canada’s Alice’s Adventures in Wonderland is showing in the Opera House of D.C.’s Kennedy Center for the Performing Arts through January 27th.  For tickets and more information, please visit here.